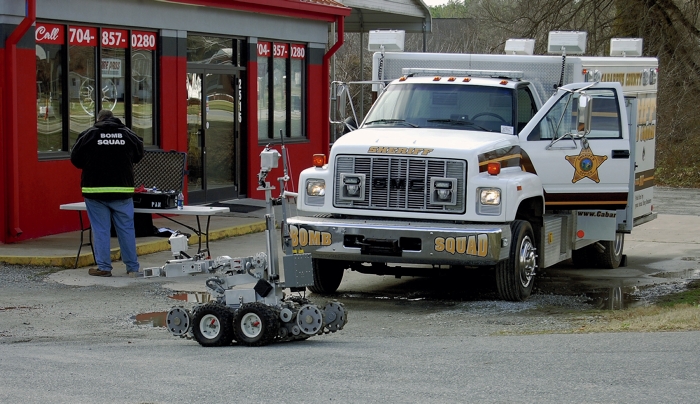 Traffic was blocked in the 2500 block of Statesville Boulevard in both directions for roughly 30 minutes Saturday afternoon as the Cabarrus County Bomb Squad and Salisbury Police Department investigated a suspicious package on a vacant lot.

Property owner George Fink found the device around 10 a.m. when he visited the property to see how much flooding the rain caused.

He described the item as a plastic pipe with a plastic bottle and cap sticking out of one end. On the other end, he noticed duct tape that had been partially removed.

“It didn’t look right,” Fink said. “It looked like a teenager trying to make a little bomb.”

Fink went home, but the more he thought about the item, the more suspicious he became, so he called the Salisbury Police Department and asked them to take a look at it.

“It looked suspicious,” said Lt. J. Wilkerson, who responded to the scene.

At that point in time, Wilkerson called the Cabarrus County Bomb Squad to the scene.

They used their bomb disposal robot to investigate the device.

“They couldn’t determine what was actually inside the tubing,” Wilkerson said.

To determine what was inside the plastic tube, the bomb squad set off a controlled explosion.

“They blasted it into two pieces,” Wilkerson explained, adding that they will do an analysis of the liquid on the inside.

Before they set off the explosion, officers sounded a siren and yelled, “Fire in the hole.”

While Wilkerson said the device was “intentionally put together,” he added that there’s no way to know who did it.

Salisbury Police blocked Statesville Boulevard between Ashbrook Road and the Woodland Creek Drive for about 30 minutes during the investigation. The road was reopened just after 4 p.m.

The property is between Cardinal Tire and the abandoned Shell gas station. It backs up to the Woodland Creek Apartment complex. The property is the last property inside Salisbury city limits before the city-county line.