Seniors express themselves through art at SilverArts 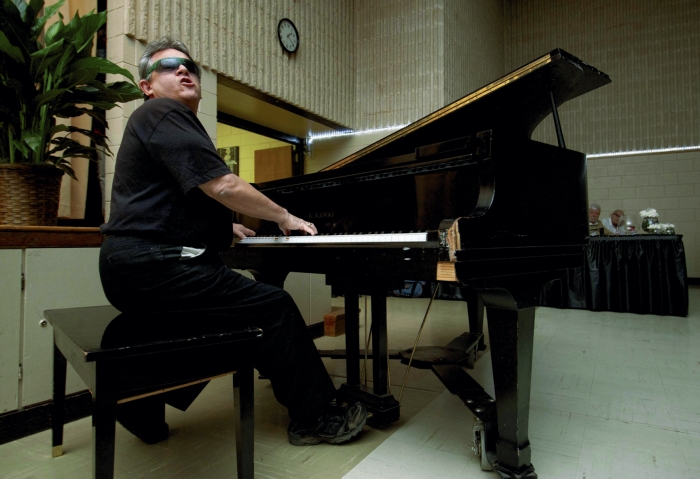 JON C. LAKEY / SALISBURY POST William "Dr Rob" Robertson performs the Instrumental section of the Performing Arts and took the gold medal. Robertson played and sang Elton John songs on the piano. The Salisbury/Rowan 2015 SilverArts judging was held on Friday at the Salisbury Civic Center. Winners of the four categories of Performing Arts, Literary Arts, Visual Art, and Heritage Arts were picked on Friday for the chance to compete in the state competition. Friday, March 13, 2015, in Salisbury, N.C.

The seniors who participated in SilverArts this year are living proof of the old adage, “Age is only a number.”

A crowd milled around the edges of the Civic Center’s meeting room Friday afternoon admiring beautifully crafted masterpieces. Rowan County artisans over the age of 50 created each one of the pieces – from paintings to quilts, cakes, jewelry, poems and scarves.

She added that SilverArts and its athletic counterpart, the Senior Games, help keep seniors mentally and physically active.

The seniors competed in heritage arts, such as jewelry, quilting, cake and woodcarving; literary arts, including essay, poetry and life experience writing; and visual arts, such as acrylics, paintings and photography.

Robertson won first place with his tribute to Elton John and will represent Rowan County in the Senior Games State Follies competition at North Carolina State University later this year.

Robertson didn’t just replicate Elton John songs, such as “Bennie and the Jets.” He added his own showy flair to the classics, playing a portion of the piece with his foot and another while lying on the ground.

“I’m just a natural ham,” Robertson said. “It’s what I thrive on”

Loflin-Kluttz is confident Robertson will come home from State Follies a winner.

“It seems like every time I send somebody to States, they come home with the gold,” she said.

Tim Smith, the Spoon Man, came in second place with his instrument performance using the spoons.

The 13-member Oak Park Band came in third place with their instrumental piece using rhythm instruments. The group has 1,105 years of life experience combined under their belt.

Rowan County has the largest year-round and second largest spring SilverArts program in the state.

The program has grown significantly since Loflin-Kluttz came on board 18 years ago. The first year, no one registered and she recruited 30 artists at the last minute. This year, there were 210 competitors ranging in age from 50 to 98, Loflin-Kluttz said.

Those who won first or second in visual or heritage arts have the option to compete at North Carolina State University in September. Only the first place winner from the performing arts category can compete on the statewide level.