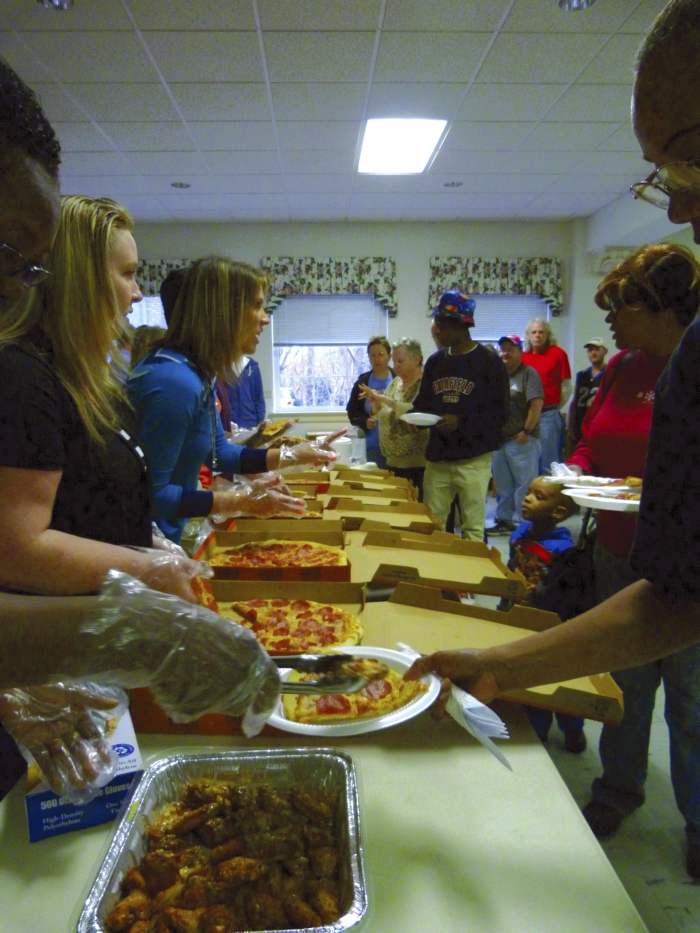 There’s an air of festivity. There’s pizza and chicken wings off to the side, and people pack in close around tables, talking and laughing. This, coordinator and associate layleader of Trinity Methodist Church Betsy Buchanan says, is the purpose of a ministry known as “God’s Supper Table” — it provides for the hungry.

“We have some people who are hungry for food, and some who are just hungry for company,” Buchanan said.

God’s Supper Table, sometimes known as Samaritan’s Table, started about eight years ago as a partnership between churches and community organizations in Cabarrus county — officially under the direction of Cooperative Christian Ministries. Together, the ministry reaches out to the city of Kannapolis, particularly the local homeless population, and offers a free meal every Monday through Thursday evening from 6 to 7 p. m. In addition to Trinity Methodist, other weekly hosts include First Baptist of Kannapolis and Kimball Memorial Lutheran Church, but Trinity is responsible for Wednesdays.

Every week Trinity and the other churches provide the space, drinks and plates, while a community sponsor provides the meal. Sponsors have included the local Chick-Fil-A, Cannon Pharmacy, A.L. Brown High School, departments from Carolina’s Medical Center Northeast, Sunday school classes, and individual families. On March 11 it was volunteers from Transitional Health Services of Kannapolis, a short term rehabilitation and long term care facility on Concord Lake Road.

Executive director Jeff Bardo says that the facility looks for a service project every month. He thought that God’s Supper Table was a perfect fit: THS has had many residents who were part of the homeless community and compassion is one value he constantly stresses to employees.

Admissions Director Tammy Wilson said it’s her job to look for volunteer and service opportunities in the community for THS. She found out about God’s Supper Table and knew she couldn’t pass it up.

THS social worker Tammy Carpenter says that just after the holidays can be a hard time of year for a lot of people, and hoped that the she and the other volunteers could bring a little brightness.

“That’s the main thing,” she said.

The fellowship hall at Trinity Methodist fills will all kinds on Wednesday nights. Old, young, families with small children, teens and early 20-somethings who come alone or with a parent. Buchanan greets people as they arrive, and runs around to different tables catching up with regulars.

Every meal starts with a devotional, given by Pastor Kirk Tutterow, and then the guests file through the line and sit down for an hour of talking and getting to know each other.

“This is what God’s Table is all about,” Buchanan said, “Fellowship.”

Buchanan says that on average, there’s a solid group of 50 guests that come every Wednesday. Many go to the other venues, as well, and have become good friends.

Ethel Sterling and Edna Fox, of Kannapolis, have been coming to God’s Supper Table since it began. Fox used to drive a group around to each location, but says that now she and Sterling are the only ones left. They started by helping out, cleaning up after the meal, and now they’re regulars.

“We know all these people,” Fox said, gesturing around the room.

Both of them come for the fellowship.

Sterling says that she appreciates that the ministry provides a place for people who are homeless in Cabarrus County to go for a meal and be around other people and be encouraged. Sterling said that she was homeless years ago when she was living in New York, and knows how hard it can be.

Robert Grant, a Kannapolis native, has been attending God’s Supper Table for eight years, and goes to every meal the ministry offers, Monday through Thursday

Even though each week has different sponsors, they’re all friendly and kind, he says. And he’s made some friends in his time here.

“The people are really great,” he said, “They make you feel welcome.”

Buchanan inherited her position as Coordinator about eighteen months ago. She used to be a teacher at Kannapolis Middle School, and says that former students have been guests more than once.

“You make some connections again,” she said.

She’s fallen in love with the job, but it’s still hard. It’s difficult to see families come in with small children, she says, when she knows they’ve no place to go. But looking out over the room of people eating, and smiling, she knows it’s good work.