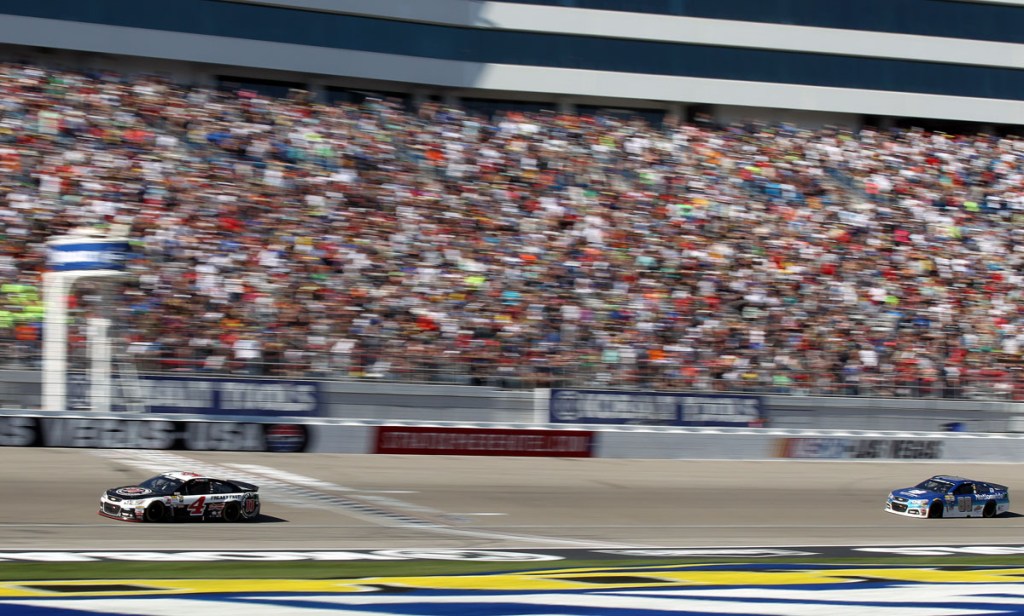 The Associated Press Kevin Harvick (4) leads Dale Earnhardt Jr. (88) on his way to winning March 8 at Las Vegas Motor Speedway. Harvick starts on the pole Sunday for the CampingWorld.com 500 at Phoenix International Raceway.

AVONDALE, Ariz. (AP) — Kevin Harvick has been nearly unstoppable since he charged to his first Sprint Cup championship last season.

The overwhelming favorite to win Sunday’s race at Phoenix International Raceway, Harvick could realistically have a shot at a three-race sweep of NASCAR’s current West Coast swing. He picked up his first win of the season last week at Las Vegas, has proved himself almost unbeatable at Phoenix, and has had strong showings at California, next week’s venue.

Although the possibility exists that he could sweep this trip, Harvick said his Stewart-Haas Racing team has not discussed it once.

Harvick won the pole, his first at Phoenix, and closed Saturday with both the fastest lap in final practice and the best 10-lap average.

He has won four of the last five races at Phoenix, and has six career victories at a track he considers one of his favorite on the circuit. As Harvick talked this weekend of how it will take a mistake by the No. 4 team or a fluke for him to lose on Sunday, the rest of the field worked on their equipment and tried not to accept their inevitable fate.

Daytona 500 winner Joey Logano, who will start second behind Harvick on Sunday, was unwilling to throw in the towel.

“He is human like anyone else,” Logano said. “He is beatable, believe me. We just have to figure out the way to do it. He knows something running here — he just knows what he needs in the race car. I think it is something he looks for and a feel that he is able to maintain his tires throughout a long run.

“I think that is what we all strive for, to figure that part out. We have identified that is where he beats us, we have to fix it. Half the battle is figuring out where you are getting beat.”

NASCAR Hall of Famer Darrell Waltrip, currently an analyst for Fox, believes the No. 4 team has the competition beat each week before the car is even unloaded at the track. Through preparation at the shop, Harvick and Childers have the luxury of spending the weekend fine-tuning in race trim.

“They’re basically unbeatable,” Waltrip said. “While Harvick is a great driver, what makes the No. 4 team so tough to beat is that the car is so fast every week. They’re setting the mark.”

Dating back to last season, Harvick has six consecutive top-two finishes, has won three of the last six races and used his win at Phoenix last year to catapult his championship run. He opened this season with two runner-up finishes before winning last week.

Waltrip likens this current dominance to the run Jimmie Johnson and Chad Knaus had as they racked up five consecutive championships and six overall.

“Smart crew chief, fast car and great driver,” he said of Johnson and Knaus. “It’s the same scenario with the No. 4 car now and the same mojo. It’s equally as hard to beat Harvick now as it was to beat Johnson a few years ago.”