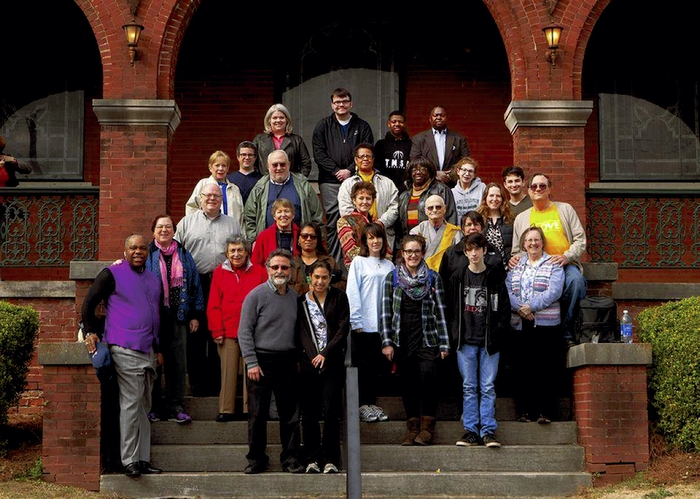 When I woke up Sunday, March 8, 2015 I wiped the sleep from my eyes just in time to see a road sign read, “Selma 8 miles.” We left Greensboro, NC the night before at 11 p.m., on a tour bus sponsored by Temple Emanuel, a wonderful Jewish congregation led by Rabbi Fred Guttman. It was a last minute decision to go to Selma where a watershed event of the civil rights movement occurred.

Growing up I read so much about Bloody Sunday and watched videos of black men and women being beaten, attacked by police dogs, gassed and stampeded by Alabama State Troopers. Fifty years later, thousands of people converged on Selma to “Look where He brought us from.”

Our time in Selma began with a service of commemoration at Temple Mishkan Israel, a synagogue where meetings were held to organize resistance to Jim Crow laws. Over 300 people crammed into the sanctuary to hear Rev. Dr. William Barber, president of the North Carolina NAACP deliver a magnificent sermon on the necessity of civil disobedience in the fight for civil rights. David Goodman, younger brother of social activist Andrew Goodman (slain in Mississippi in 1964) told us that while his family still grieves his brother’s death he know that Andrew’s death shined a National spotlight on the plight of oppressed people in Mississippi.

Then, Dr. Susannah Heschel daughter of the late Rabbi Abraham Joshua Heschel, who marched with and eulogized Martin Luther King Jr., electrified the audience; challenging the Jewish congregation to get off the sideline in the fight for social justice and take a stand against exploitation of the poor and downtrodden.

The final speaker was Dr. Clarence B. Jones, former speechwriter and personal attorney of Dr. King (1960 – 1968) and professor at the University of San Francisco. Jones wrote the first seven paragraphs of the American classic, “I Have a Dream” speech. Dr. Jones captivated the audience with his stories about the marches in Albany, Birmingham, Washington, and Selma. In the midst of his remarks Jones said, “If the old lions don’t lift their heads and tell the story, then the hunter’s will take all the credit for the hunt.” The audience stood and clapped for two minutes. Many of us wiped away tears.

Around 2:30 p.m. we spilled out onto Broad Street where we encountered hundreds of people walking towards the Alabama River. As we walked pass the jumbotron (which featured civil rights leaders like Jessie Jackson and Al Sharpton at a worship service at historic Brown Chapel AME Church a few blocks away) the crowd swelled and we were shoulder to shoulder with thousands of people from all over the country. I looked behind me and before me at a sea of peaceful commemorators, all trying to cross the infamous bridge, where Congressman John Lewis almost died from a head injury.

As we approached the apex of the Edmund Pettus Bridge I asked a State Trooper his estimation of the number of people on Broad Street. He looked at his partner and said, “At least 100,000.” At 4 p.m. I finally crossed the bridge with thousands of God’s children of all races, creeds, and colors. It was a really emotional moment. Standing in front of the “Welcome to Selma” sign, I found myself wiping away tears. Clarence Jones words came back to me. Many of the old lions are gradually and quietly passing off the scene. Someone must capture, preserve and repeat their stories, so that generations yet unborn will remember the victory our ancestors achieved out of carnage of Selma.