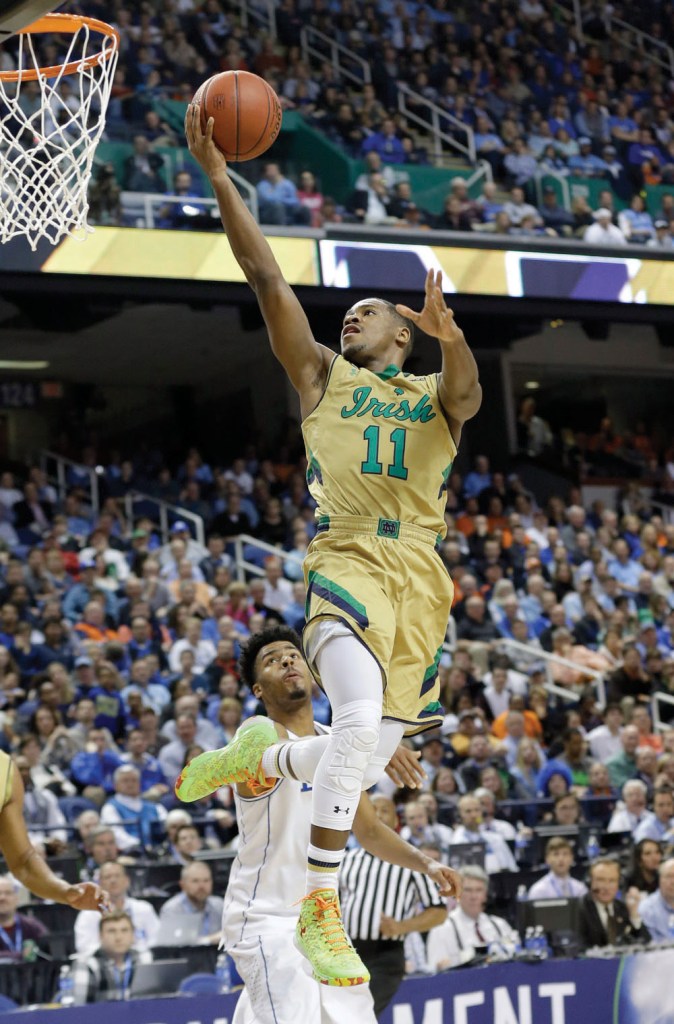 The Associated Press Notre Dame's Demetrius Jackson (11) drives to the basket against Duke during the first half Friday in an ACC Tournament semifinal.

Demetrius Jackson added 15 points and Jerian Grant had 13 for the third-seeded Fighting Irish (28-5). They shot 50 percent, led by 17 and held off the Blue Devils’ comeback attempt to beat them for the second time this season and advanced to a league championship game for the first time.

Notre Dame will face No. 19 North Carolina, the tournament’s fifth seed, on Saturday night in the title game.

Tyus Jones pulled Duke to 68-64 with a 3-pointer with about 3 minutes left.

Okafor turned it over before he missed two free throws, and Pat Connaughton knocked down a big jumper with about 1:15 left and the shot clock winding down to put Notre Dame up by six.

Jackson then stole the ball from Quinn Cook with around a minute left before missing a 3. Cook’s last-gasp 3 with about 30 seconds left hit off the back iron and Grant and Colson iced it with free throws in the final 30 seconds.

For much of the second half, though, it seemed as if Duke would find a way to pull off one of the biggest comebacks in ACC Tournament history.

Notre Dame, which led 41-26 at halftime, was playing 24 hours after giving back all of an 18-point lead against Miami before recovering to advance to another league semifinal.

Getting to this point hasn’t been a problem: The Irish had reached the semifinals in its last four years in the Big East (2010-13) — and lost all four.

Okafor hit a jumper and Justise Winslow went coast to coast for a layup that made it a seven-point game with 5 minutes left. Notre Dame’s top interior defender — Zach Auguste — fouled out.

Okafor then pulled Duke to 66-61 with a layup at the 4-minute mark. After Grant hit two free throws, Jones buried a 3 — just Duke’s third of the night — with a hand in his face to make it a four-point game.

Notre Dame: Irish coach Mike Brey — the only former Mike Krzyzewski assistant coach to beat his former boss — improved to 3-3 against him.

Duke: The Blue Devils had 26 points in the first half, matching their season low for any half.