A10 Tournament: Even with loss, Davidson padded its NCAA chances 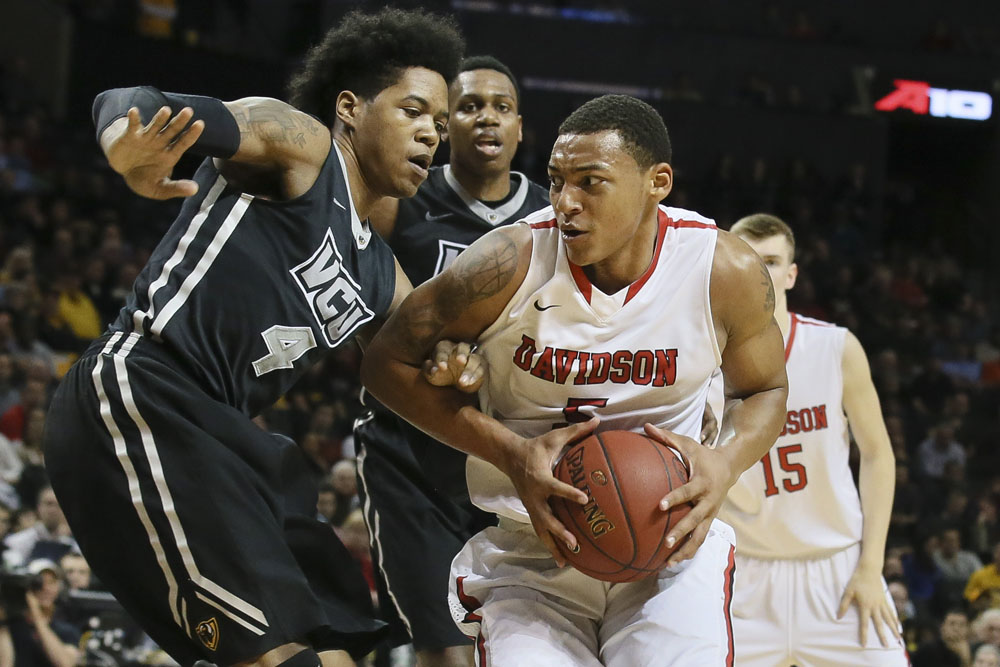 The Associated Press Davidson guard Jordan Barham (5) looks to pass around VCU forward Justin Tillman (4) in the second half Saturday of the Atlantic 10 Conference tournament in New York. VCU won 93-73.

The top-seeded and 24th-ranked Wildcats had their 10-game winning streak snapped in a 93-73 loss to VCU in the Atlantic 10 tournament semifinals Saturday, but McKillop is confident his team has done enough to earn an at-large invitation to the NCAAs.

“My mindset right is we’re the winners of the Atlantic 10 Conference,” McKillop said.

Mo Alie-Cox muscled his way to 18 points inside and Treveon Graham added 18 more for the Rams, who advanced to the A-10 championship game for the third straight season.

A-10 player of the year Tyler Kalinoski scored 19 points a day after hitting a buzzer-beater that kept Davidson (24-7) from getting upset in its Atlantic 10 tournament debut. The conference newcomers won the regular-season title and are hoping that’s enough to get them to the NCAAs.

“You win that for the duration of the season. You play pretty darn good basketball as you close out the season, winning 10 of the last 11. Yes, we did lose to (North) Carolina and Virginia, but I think our Virginia game got people’s attention. I think clearly with 24 wins, a conference championship and getting to the semis in the conference tournament, I think that’s a pretty good statement about where we belong.”

Davidson reached the NCAAs as the champion of the Southern Conference tournament five times in the last nine years.

Fifth-seeded VCU (25-9) is on its way to the NCAAs no matter what happens against either Dayton on Sunday. VCU will be looking for its first A-10 tournament title after losing the last two finals.

The 255-pound Alie-Cox was powerful in the paint, collecting seven offensive rebounds and most of the Rams’ 16 second-chance points before fouling out with 2:13 left. By that point he had done plenty of damage and the Rams fans at Barclays Center happily sent him off to a big ovation.

Graham was Mr. Outside, going 4 for 4 from 3-point range.

VCU was playing its 12th game without star point guard Briante Weber, who went down on Jan. 31. Weber was on pace to set the NCAA career steals record and he set the tone for VCU’s havoc defense. The Rams went 5-5 to end the regular season without him, including an 82-55 loss at Davidson.

The Rams said after VCU beat rival Richmond in the quarterfinals Friday that playing a third straight day would be no problem. They said the memory of that rout in North Carolina would put life in their legs.

“That was real humiliating when we were down there,” Alie-Cox said.

Davidson was not done.

It turned out to be Davidson’s last big push. VCU rattled off the next 10 points, highlighted by a slam from Cox and a 3 from Graham to make it 67-52 with 7:57 left.

Davidson had come from nine down in the final five minutes to beat La Salle on Friday, but the Rams pulled away.

“Just bring energy the whole time and had a lot of confidence because we’ve had a couple of pretty impressive comeback wins,” Davidson’s Brian Sullivan said. “I thought here we go, we’re going to get another. But credit to them, they held us off.”