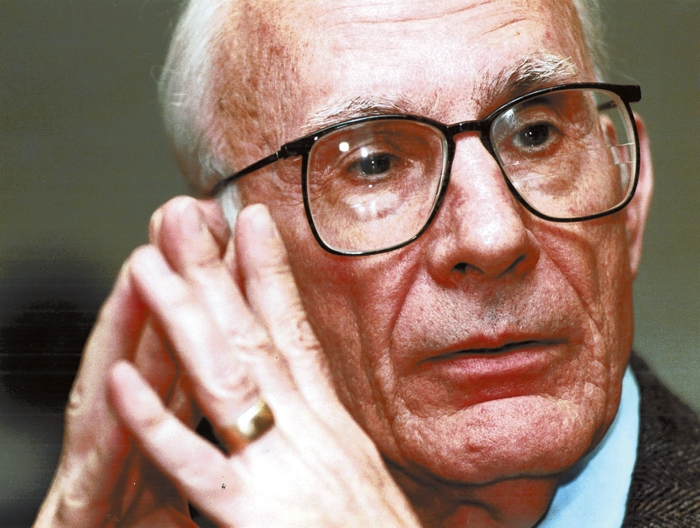 In this Nov. 1, 1990 photo, Claude Sitton, who covered the South for The New York Times in the 1960s, poses for a photo, in Atlanta. Sitton, who was a leader among reporters covering the civil rights movement in the South in the 1950s and '60s and later won a Pulitzer Prize for distinguished commentary at The News & Observer, in Raleigh, N.C., died Tuesday, March 10, 2015. He was 89. (AP Photo/Atlanta Journal-Constitution, Johnny Crawford)

Claude Sitton was, indeed, forceful and fearless. But not without flaws, flaws that show what is great and what can be dangerous about journalism.

Sitton’s forcefulness shaped a controversy that rages more than two decades later: Did the N&O unfairly railroad Jim Valvano? Many State fans neither forgive nor forget. One said this week, “Roy Williams is lucky Sitton isn’t around today.”

Jay Price’s obituary of Sitton didn’t ignore the issue: “There was nothing unusual about Sitton’s two hats, running opinion and news pages…. But Sitton was the last editor at the N&O to have both roles, and that sacred separation between the two worlds was sometimes too flimsy to stand up to his vigorously held views.”

That wasn’t the only time. I was at the N&O from the time Sitton arrived in 1969 until I left in December 1975. I saw his strong opposition to a medical school at East Carolina University drive not only editorials but also news coverage.

You like that forcefulness when you agree. But what about when you don’t? Watch Fox News.

All that said, Sitton was an extraordinary newsman. When he won a Pulitzer Prize for commentary in 1983, many regarded it as a makeup call. He should have won it for his coverage of the civil rights movement for The New York Times in the ‘60s.

He inspired fear and loyalty from people who worked for him and, often, fear and loathing from those he covered. He set high standards, and he was demanding. He wasn’t the kind of guy you sat around and shot the breeze with.

He once said, “Popularity is not a legitimate goal of a newspaper.” He didn’t chase popularity. He chased the story. He usually got it, and got it right.

Pat Stith, one of few reporters who could match Sitton’s chops, said it best: “He was a great man to have on your side, a man of tremendous personal courage, and I was honored to work for him. And lucky to work for him.”