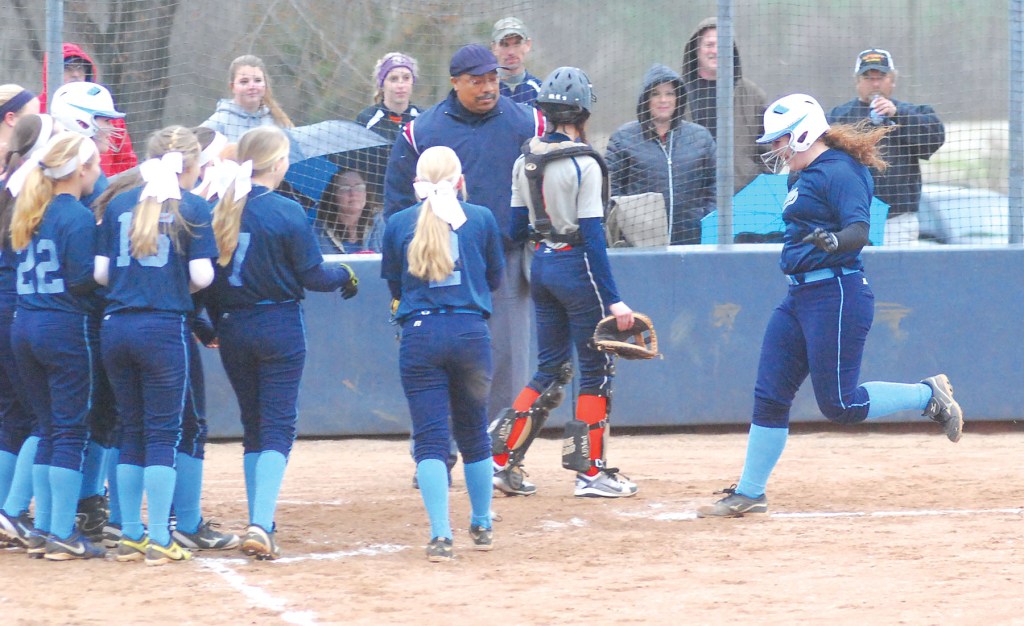 MOUNT ULLA — And then there was one.

An early season softball showdown in the South Piedmont Conference went to West Rowan on Friday afternoon as it powered past the Carson Cougars 3-0. The Greene sisters, Peyton and Parker, provided most of the firepower for the unbeaten Falcons (4-0, 3-0 SPC) as they handed the Cougars (2-1, 2-1 SPC) their first loss of the young season.

Peyton Greene, a junior, out-dueled Carson ace Lacee Hunsucker in the circle with a two-hit effort, including 11 strikeouts. She also produced the difference maker in the game at the plate with a line-drive, two-run homer in the third inning. Younger sister Parker, a freshman, added valuable insurance with a solo homer in the fifth for a 3-0 lead. It was the first homer of the season for each.

For now, the Falcons have the early edge in the competitive SPC and are the only unbeaten team left in the league. They take a bold step Saturday when they travel to Taylorsville to face state and national powerhouse Alexander Central (5-0).

On a cool, rainy afternoon at West Rowan, the power pitching duel between Greene and Hunsucker culminated with two outs in the bottom of the third in a 0-0 game. Parker Greene was on second after a double, and Peyton hammered the first pitch she saw from Hunsucker deep to straightaway center field for the 2-0 lead.

“I like to swing at first pitches because chances are if I get down in the count I have more trouble” Greene stated. “It was right down the middle and I am very aggressive in that situation.”

With the lead secured, Greene proceeded to shut down the Cougars the rest of the way with her power pitching. She allowed just a third-inning single to Kaycee Kennedy and a seventh inning double with two outs to Meghan Kelley.

The Falcons’ defense, led by second baseman Taylor Martin and right fielder Khara Fesperman with three putouts each, was flawless after the first inning.

“We are not good enough to dominate anybody,” said West Rowan coach Jimmy Greene, the father of the Greene sisters. “We are not solid enough all the way through to dominate so we have to find a way to win every time out. Today, Peyton and Parker came through but next time it could just as easily be Martin, Marisa Yow or Hunter Gibbons.”

Martin credits the good start so far this season to the returning players blending with the freshmen newcomers.

“We are all coming together and playing well right now”, she said.

West Rowan ended up with six hits off Hunsucker, who fanned eight and walked just one. Parker Greene had her two extra-base hits while Savannah Cline had a pair of singles to lead the Falcons’ offense.

“Lacee pitched well, but they hit the ball hard and we didn’t,” Carson coach Dee Miller said. “You have got to go up there with the attitude you are going to hit the ball, but we didn’t do that today. But we will get to see them again.”