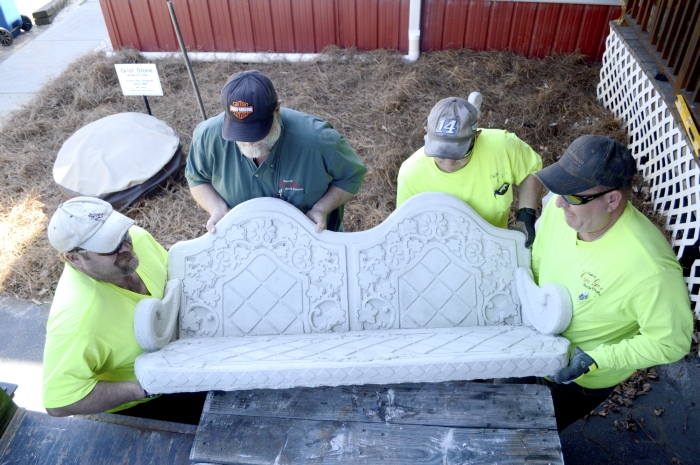 Josh Bergeron / Salisbury Post - China Grove Public Works employees on Thursday lift a bench off of the back of truck before installing it next to the roller mill. It was one of a series of improvements made this week in preparation for an open house at the mill.

CHINA GROVE — The Historical Society of South Rowan on Thursday revived two pieces of China Grove’s roots and placed both right next to main street.

With some help from the town’s public works department, the society planted two chinaberry trees near the China Grove Roller Mill. The trees, when planted, only poked a few feet out of the dirt, but represented the roots of the town that houses the historical society’s most important project — the roller mill.

The Town of China Grove derives its name from the chinaberry trees. Before its incorporation, a grove of the trees reportedly sat on land where the China Grove Depot formerly stood. Indian tribes supposedly cultivated the trees and use the berries to make beads. In the 1970s, several trees were planted, but they were recently cut down to make way for an extra railroad line. The only group of multiple trees that Barbara Doby, historical society chairwoman, could recall is located near the China Grove Police Station. That group was planted in the 1980s, she said.

In preparation for the China Grove Roller Mill’s first open house of 2015 and the historical society’s 26th anniversary, the society planted two trees Thursday that were a product of the roots from the torn-down grove of trees. One was planted at the front of the mill, on the building’s left side. The other was planted just a few feet from the sidewalk near the roller mill.

Other renovations completed this week included placing three benches and a concrete table at various spots around the roller mill. A bit of spring cleaning was also required for Sunday’s events, which start at 3 p.m. It will be the first open house of the year for the roller mill. Mayor Don Bringle will speak briefly before the mill is opened to the public. A video about the mill, produced by Carson High School students, will also be shown during Sunday’s open house.

The mill has undergone a series of changes in the previous several months aside from Thursday’s renovations. Late last year, the Historical Society of South Rowan unearthed an original mill stone — previously buried under the building. The society also opened the basement of the mill to the public.

Sunday’s events kick off a full calendar of events in 2015.

Historical society events scheduled for 2015 include:

• A weekly farmers market that starts on May 1

The farmers market will be from 4 p.m. to 7 p.m. each Friday until September 26.