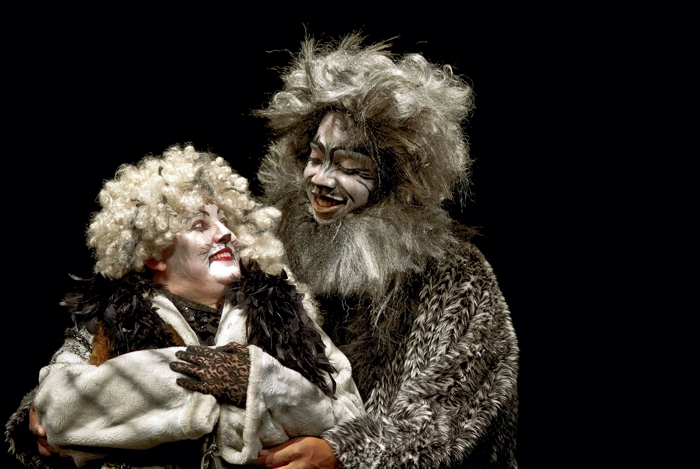 If you think of the musical “Cats,” what springs to mind?

The song “Memory,” right? Jenny Carroll, as Grizabella, makes that song her own and thrilled the audience in the opening night production of “Cats” by Piedmont Players.

There are numerous moments to appreciate here. Traven Harrington is showcased in three roles, Old Deuteronomy, Gus and Growltiger, and is full of character, with a deep voice.

Another great number is “the Rum Tum Tugger” with Charlton Alicea catting about the stage.

There isn’t a plot to this adaptation of T.S. Eliot’s poetry, “Old Possum’s Book of Practical Cats.” Rather, it is a collection of cats telling cat stories. begging for attention, bragging about their escapades and explaining to the audience how many names a cat has.

The costumes are mostly bodysuits painted to resemble cats, with big wigs to simulate fur and wooly leggings or sleeves. The older cats are usually dressed in big coats or rags, to show their age. Darlene Krantz, who has a background in costuming, was in charge of costumes and makeup.

Carroll’s costume of gray stripes hiding an inner glow was the best at suggesting this was one cat who was running out of lives.

The cast does a good job of trying to move like cats, with some big stretches, paw licking and rubbing against things.

One of the most solid parts of the show is the orchestra, led by Mike Wilkins. A nice combination of reeds, horns and keyboards easily handles Andrew Lloyd Webber’s trademark music.

Tod Kubo directed and choreographed the show, doing well with a group of people who have trained in dance. The cast was as lithe as they were able, and some did have outstanding movement. Reid Leonard’s set and lighting design kept things mostly dark, as cat-filled alleys are wont to be during the night. A giant old stove proved to be an entrance, and an abandoned tire turned into a moving platform when it was Grizabella’s time to reach for the stars.

The prologue was a little slow, and it was very hard to understand what the cats were saying, but the second act was faster and more engaging. Granted, this is a song and dance show, but some of the numbers did seem to go on a bit.

It’s surprising hearing “Memory” at the end of the first act. It’s a very short song. But as bits of it are repeated and Grizabella completes the climax of the song, you’ll realize what you’ve heard so often are all the lyrics at one time, not staged as they are in the musical.

After the somber end to the song, the cast, lead by Old Deuteronomy, leave the audience on a light note, with “The Ad-Dressing of Cats.”

Opening night’s standing ovation and ticket sales indicate this is going to be a big show for Piedmont Players, one they’ve worked hard on. At just over two hours, with a 15-minute intermission, there is nothing objectionable here. Children should enjoy the costumes, singing and dancing, as well as the adults.

Theater patrons Ed Brown and Dr. Frank Shafer are producing partners for “Cats,” which continues tonight and Saturday and March 18-21 at 7:30 p.m. at the Meroney Theater in downtown Salisbury. There is a matinee March 15 at 2:30 p.m. For tickets, call 704-633-5471 or www.piedmontplayers.com