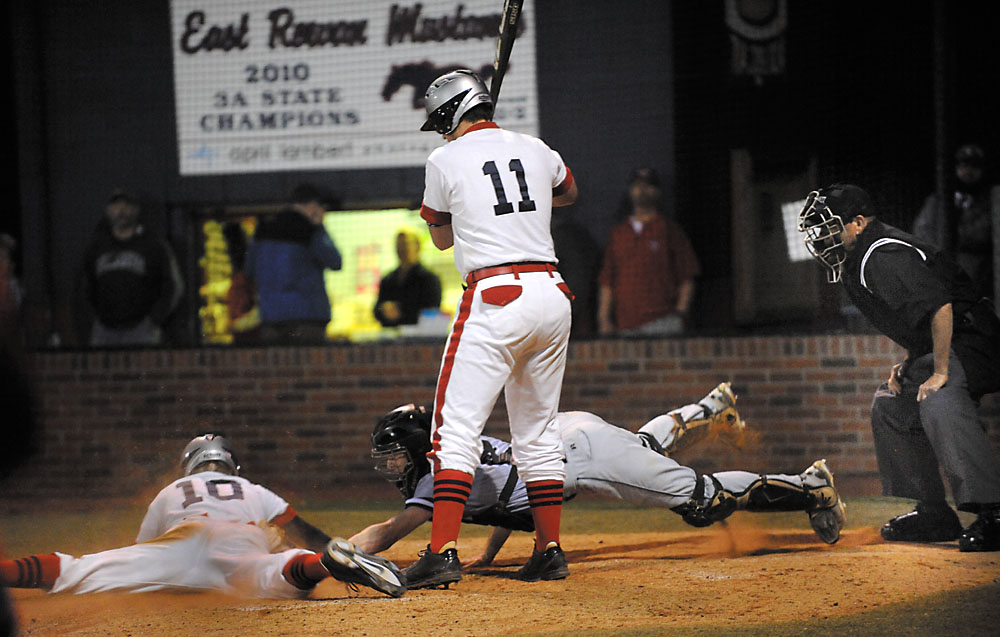 GRANITE QUARRY — It looks like the small crisis in Granite Quarry is over.

East Rowan put Tuesday’s disheartening loss at Concord in the rearview mirror with a much-needed 6-3 South Piedmont Conference victory against visiting Hickory Ridge on Thursday. The Mustangs (4-2, 3-1) snapped a two-game skid and moved into a three-way tie for the league lead.

“We were trying to get our feet back underneath us,” coach Brian Hightower said. “The best thing about this was we got to move it up a day. It was one less day we had to wait to get back out here and play.”

The Mustangs didn’t play a perfect game, but they packaged timely hits with another strong performance by senior right-hander Logan Towne. Third-baseman Jackson Justus made a pair of errors, but he went 3-for-3 at the plate, scored twice, stole a base and drove in the game-tying run in the bottom of the third inning.

Outfielders Sam and Seth Wyrick each crushed triples into the far reaches of Staton Field. And shortstop Ike Freeman stole home in the fourth, producing a run that assuredly deflated the Ragin’ Bulls (1-3, 1-3).

“That last game was a reality check,” said Freeman. “We lost a six-run lead. It made us realize no team is going to lay down and just say the game is over. We had to find a way to win tonight.”

This one turned in the bottom of the third inning. Trailing 2-1, East Rowan’s Sam Wyrick drove a John-Riley Hathcock offering over center fielder Dan Grochmal for a leadoff triple. Freeman followed with a flyout to shallow right before DH Tyler Scruggs bounced out to third. With two away Justus lined an 0-2 curveball into center field to tie the score.

“(Hathcock) threw mostly curveballs,” Justus said. “I took the first two and just sat on the curve. That’s all you had to do — sit on the curve and adjust to the fastball.”

Hathcock’s approach may have been to pitch backwards, but his strategy quickly unraveled. Before the inning was over Hickory Ridge committed two errors in less than a minute and East Rowan’s Jordan Wise cashed in with a two-out, two-run single, providing a 4-2 lead.

“Mistakes and errors,” Hickory Ridge coach Branden Knapp said. “We’re working on getting the kids to move past it when they make a mistake.”

An inning later Freeman stroked a two-out double to right-center, took third on a passed ball and stole home on Hathcock’s second pitch to Scruggs.

“His windup was so slow,” Freeman said. “I walked halfway down the line on the first pitch, but had trouble getting it timed up. Then I looked at (Hightower) and all he said was ‘steal home.’ I thought it was kind of risky, but that’s what we do here.”

The rest was up to Towne (2-0), who needed just 89 pitches to toss a complete-game. Mixing speeds, he yielded only one earned run on six hits, struck out five and walked none. He threw 22 first-pitch strikes to the 31 hitters he faced.

“I definitely felt in control,” he said. “Whenever you’re getting ahead like that it’s easier to be in command and stay one step ahead of the batter.”