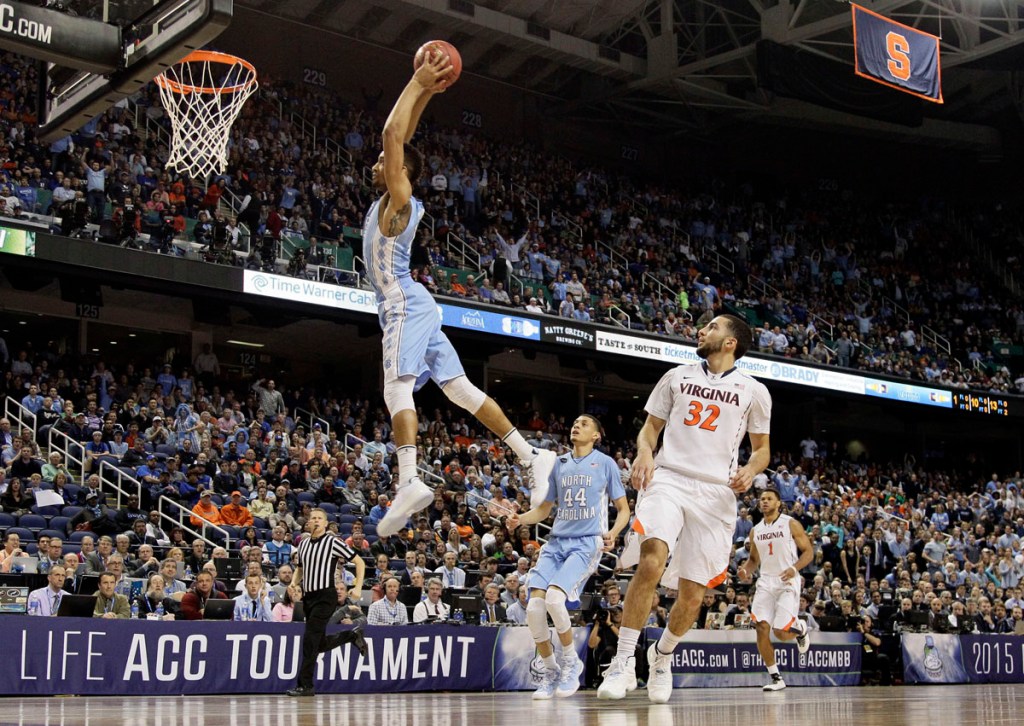 The Associated Press North Carolina's J.P. Tokoto, left, goes up to dunk against Virginia during the first half in Friday's semifinals of the Atlantic Coast Conference tournament in Greensboro.

They’ve picked the right time to do it.

Paige also hit a huge shot to beat the clock in the final minute, helping the fifth-seeded Tar Heels (24-10) hold off the top seed and reigning champion in a tense finish.

It came one day after they pushed their way past No. 14 Louisville in the second half, a two-game stretch that validates Williams’ belief that his team can beat anybody when it plays tough enough.

“Teams talk about us being soft and all that kind of stuff,” Williams said, “but I liked our toughness down the stretch yesterday and today both.”

Freshman Justin Jackson scored a season-high 22 points to lead the Tar Heels, who never trailed and led by 13 points in the second half before all-ACC guard Malcolm Brogdon singlehandedly brought the Cavaliers (29-3) back.

Brogdon scored 22 of his 25 points after halftime, including a run of eight straight shots that twice pulled Virginia to within one — the last coming on his drive with 1:16 left.

But Paige answered with an up-and-under move in the lane against Brogdon to beat the shot clock with 41.6 seconds left and push the margin to 65-62.

Justin Anderson — in his second game back after missing eight games due to a finger injury and an appendectomy — and Brogdon both missed tying 3s, and UNC went 6 for 6 at the line in the final 16 seconds to hang on.

The Tar Heels shot 55 percent against Virginia’s tough defense, controlled the boards and played solid defense of their own for much of the night to earn their fourth trip to the final in five years.

“We competed at the highest level we’ve competed all year,” Paige said.

“They showed great heart and fight to claw their way back into it, to have a chance to maybe tie it or extend the game,” Virginia coach Tony Bennett said. “So I like that. But what we try to hang our hat on was really porous.”

UNC: Paige finished with 14 points. … The Tar Heels have now beaten two higher-seeded teams in the tournament for the first time in their history. … UNC went 7 for 14 from 3-point range. … UNC survived 18 turnovers that led to 24 points for Virginia. … J.P. Tokoto left late after taking a blow to the head. … Freshman Theo Pinson missed his third straight game due to foot soreness.

Virginia: Anthony Gill and London Perrantes each scored 12. … Virginia shot 38 percent in the first half but improved to 50 percent after halftime to cut into UNC’s lead. … The Cavaliers fell to 0-6 against UNC in the league tournament in Greensboro.

UNC’s 54.8-percent shooting was the highest against Virginia in 163 games going back to November 2010.

“I always knew I was a shooter,” Jackson said. “Obviously the numbers didn’t show it. But for me, I knew it would come around sooner or later.”

Anderson was averaging 13.4 points and shooting a league-best 48 percent from behind the arc before suffering a finger injury in early February. He hasn’t scored in the two games since his return and missed all six shots while playing with a bandage on his shooting hand, but said he feels fine physically and “great” about his shot.