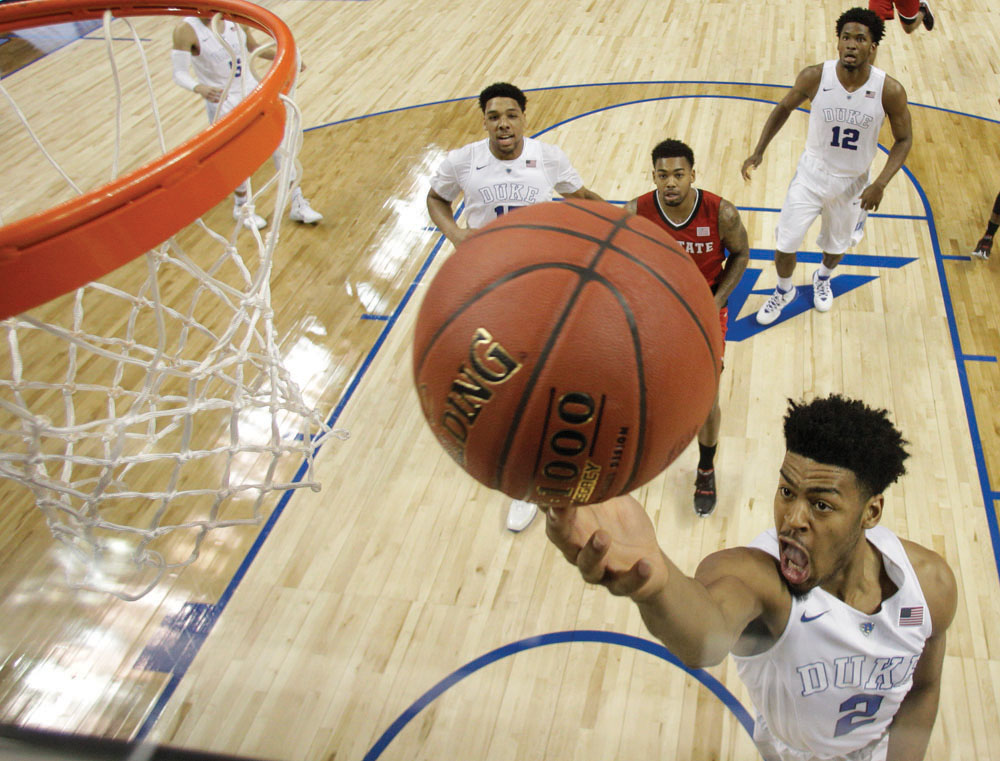 The Associated Press Duke's Quinn Cook (2) drives to the basket against N.C. State during the first half Thursday in the quarterfinals of the ACC Tournament at the Greensboro Coliseum. Duke defeated N.C. State 77-53.

GREENSBORO, N.C. (AP) — No. 2 Duke turned another chance for revenge into a rout.

They never trailed, scored on 22 of their first 26 possessions, led by 30 and cruised into the semifinals by avenging their first loss this season.

Ralston Turner had 16 points and Abdul-Malik Abu added 10 for the seventh-seeded Wolfpack (20-13).

One night earlier, they beat Pittsburgh in the second round for their third straight win.

But key guard Anthony “Cat” Barber — who had 34 points against Pitt — was scoreless, missed seven shots and never returned after he was shaken up in a collision with Amile Jefferson with 13:26 left.

Coach Mark Gottfried said he didn’t have any updates on Barber’s condition, did not specify the nature of the injury and said he was being evaluated by the team’s medical staff.

Trevor Lacey, who had 21 points last time against Duke, managed just four on 2-of-7 shooting.

Justise Winslow, Matt Jones and Grayson Allen had 11 points each while ACC player of the year Jahlil Okafor added 10 for Duke, which will play either No. 11 Notre Dame or Miami on Friday night in the semifinals.

The Blue Devils last played as the nation’s second-ranked team on Jan. 11 — when they limped out of Raleigh with an 87-75 loss to N.C. State.

“I think if you asked anybody on our team,” Turner said, “they’d tell you (the Blue Devils) would be ready for us.”

And with Duke clicking like this, there was no chance of that happening again.

There was no shortage of highlights for the Blue Devils during a stretch of 18½ minutes in which N.C. State managed just four defensive stops.

Plumlee had two alley-oop dunks. Jones buried a corner 3 with a hand in his face. Cook fumbled the ball while on the run, but recovered in time to bury a 3 of his own in the other corner.

By the time Allen swished a 3 with 90 seconds left, Duke led 49-20 and it was effectively over.

“We couldn’t get stops,” Turner said. “That was the game.”

Duke threw some new wrinkles into its defensive game plan to slow down the Wolfpack’s guards and keep Barber from penetrating. The Blue Devils used three-quarter-court pressure, mixed in some 1-3-1 zone defense and defended N.C. State’s three perimeter players with four Duke players while leaving either Okafor or Plumlee to control the paint. Lacey admitted afterward that at times he had trouble recognizing Duke’s defense.

N.C. State: This was easily the most lopsided loss of the season for Wolfpack, who hadn’t been beaten by more than 16 points (Cincinnati, Boston College).

Duke: Tyus Jones had eight assists. … The Blue Devils’ current winning streak is their fifth of at least 10 games during this decade.