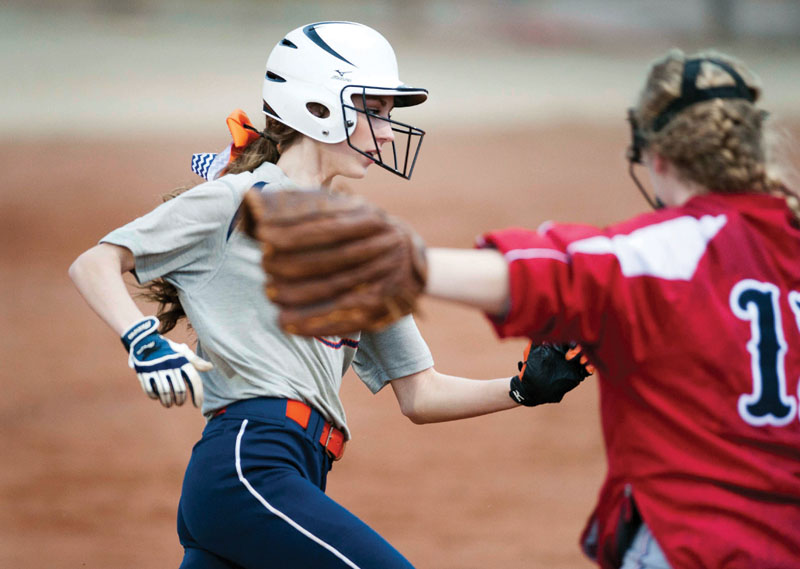 Bauer’s two-out, tiebreaking single in the bottom of the sixth lifted the Cougars to a 4-3 South Piedmont Conference win against East Rowan on Wednesday.

“For a sophomore, she’s playing big,” Carson coach Dee Miller said. “I hope she can keep it up.”

Rain was on-and-off at the Carson diamond, and the game was back-and-forth.

East Rowan didn’t get a hit against Carson pitcher Lacee Hunsucker the first three innings, but a walk and Kaleigh Troutman’s two-run homer to center gave the Mustangs a 2-0 lead.

“She hit a curveball that slipped a little bit,” Hunsucker said. “It was supposed to go outside, but it went right down the middle.”

The Mustangs made it 3-1 in the top of the fifth. A two-out run scored from third when Medlin hustled down the line and beat out a slow infield roller.

“We were all a little bit nervous, but we didn’t get frustrated,” Bauer said. “What we’ve found out in these first two games is we can depend on our teammates even when we get behind.”

Bauer whacked a fifth-inning shot down the left-field line to drive in the run that cut Carson’s deficit to 3-2.

The decisive inning was the Carson sixth. Krista Peninger doubled with one out. Micah Furr’s groundout moved Peninger to third and brought No. 9 hitter McKenna Moose to the plate.

Moose drew a walk that extended the inning. That gave Carson’s best hitters a chance to swing, and they came through. Kaycee Kennedy’s single tied the game. Then Bauer’s third hit brought home Moose and put the Cougars (2-0, 2-0 SPC) on top for the first time. Bauer said she was looking for an inside pitch and she got one.

“It was a typical early-season game with both pitchers in control for the most part,” East Rowan coach Mike Waddell. “It could’ve gone either way. They won because they had more timely hits.”

East Rowan (1-1, 1-1 SPC) put two runners on base in the seventh, but Hunsucker got Medlin to pop up, and shortstop Adison Collins made a sprinting catch to end the game.

Hunsucker was dominant two years ago, but she tore an ACL as a junior. Her comeback as a senior is under way.

“She’s not 100 percent yet, but she’s working hard and her endurance is improving,” Miller said.

Hunsucker struck out 10, walked one and limited the Mustangs to four hits.

“It just feels good to be back,” she said.