New coffee shop has a story behind it 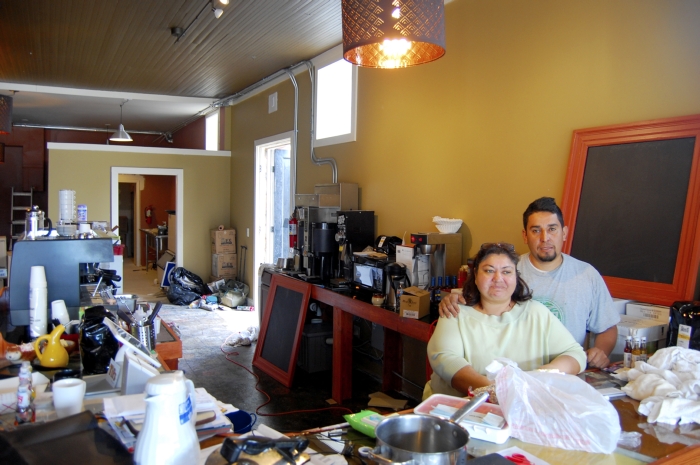 Many stories have been told over a hot mug of fresh-brewed coffee.

And with the grand opening of Mean Mug Coffee Company Friday in Salisbury, people have a new place to share their stories over a cup of joe.

Owned by Guatemalan natives Evelyn and Rigo Medina, Mean Mug has been in the works since last year. It’s located on South Fulton Street next to Mambo Grill and Tapas, between Ridge Avenue and Elm Street.

Sitting inside the shop Wednesday, Evelyn told her and her husband’s story. Rigo knelt down behind the cashier counter finishing up some work, the occasional noise of his drill piercing the air.

“I always had a fire in my belly about a coffee shop,” Evelyn said.

She and Rigo married in 2002 and have been running a successful construction business, Medina Construction, for around eight years now.

But being from Guatemala, coffee has always been in their blood, Evelyn said. And since there is a small number of immigrant-owned businesses in the county, she wants Mean Mug to be place where people from all walks of life can come together as a community and share their stories.

She wants to hold “storytelling” nights at the coffee shop so people can listen to and share stories.

The Medinas have two children, 11-year-old Sascha and 10-year-old Samuel.

Evelyn came to America in the summer of 1976 when she was 7 years old. In Los Angeles, she reunited with her mother, Maria Guzman, who had come to the country in 1970.

Guzman worked as a single mother raising five kids, of which Evelyn was the youngest, in California. Her mother, now retired, lives next to the Medinas at their home on Faith Road.

Evelyn came to Salisbury in 2001 on a business venture that didn’t pan out. But she fell in love with the area.

“I remember the first fall I was here I was mailing leaves to family in California to show them the different variety of colors on the trees,” she said. Being able to experience all the seasons of the year still fascinates her.

The community has embraced her and her family, she said. Her children were born at Rowan Medical Center. The family’s construction company helps out with Salisbury’s Block Work program each year.

Evelyn’s brother, Harold Mollinedo, has a mental disability and is heavily involved with Special Olympics in Rowan County.

At the coffee shop, people stop by every day, Evelyn said, asking when it will open. “It takes away the scary part,” of opening a business when people are supportive, she said.

She said the family goes back to Guatemala, in Central America, at least once a year, recently on mission trips through their church, St. John’s Lutheran.

Guatemala is her roots, Evelyn said, but America is her home. “I’ve been here all my life … this is my country,” she said. It’s the best of both worlds, she said about being an American and having the Guatemalan culture.

The coffee served at Mean Mug is roasted by Black Powder Roasting Company of Mooresville, which gets coffee beans from a grower in Guatemala that the Medina’s know personally.

The coffee at Mean Mug will be single-origin and fair trade, she said. “I want to make sure that we’re purchasing our coffee in a way that compensates them properly,” she said about farmers who grow coffee.

Mean Mug will have a variety of brews: coffee, mochas, expressos, etc. There will also be locally baked pastries available.

The free Wi-Fi, a must have for any coffee shop, at Mean Mug is Fibrant operated.

The shop’s manager is Jenny Mead, formerly of TasteBuds Coffee and Tea, which closed in 2013.

The shop has earthy colors, which Evelyn said come from her personality. “They make you feel comfortable and at home,” she said.

One wall in the shop is currently decorated with works by a local artist. And Evelyn said she wants the shop to be a place where artists can display their work.

Mean Mug is the name of a coffeehouse  in Chattanooga, Tenn., that Evelyn’s friend, Paula Bohland with Downtown Salisbury Inc., visited. Bohland, who co-owns the building Mean Mug is in, suggested the name to Evelyn. They thought the name was “cute” and “playful.” And once she found that it wasn’t registered in North Carolina, Evelyn decided to use it.

Mayan culture, which was centered in northern Central America, is also on display at the coffee shop, such as the symbol in the company’s logo. It’s a Mayan sun calendar with a Mayan coffee bean.

Evelyn also wants to host jazz musicians at the shop on Sunday evenings, and show independent movies there.

The wood counter was made by a third generation carpenter from Mexico. The metal on the countertops was left over from the renovation of the historic Flowers Bakery on Main Street.

Evelyn said she is excited, anxious and nervous about opening the shop. “All of the above,” she said about her emotions

Only time will tell what stories are told at Mean Mug, but it’s certain that plenty of people will hear the Medinas’ tale.

“It’s an immigrant story,” Evelyn said, “Small little family from Guatemala, and here we are so many years later running two businesses and successfully raising our two little kids.”