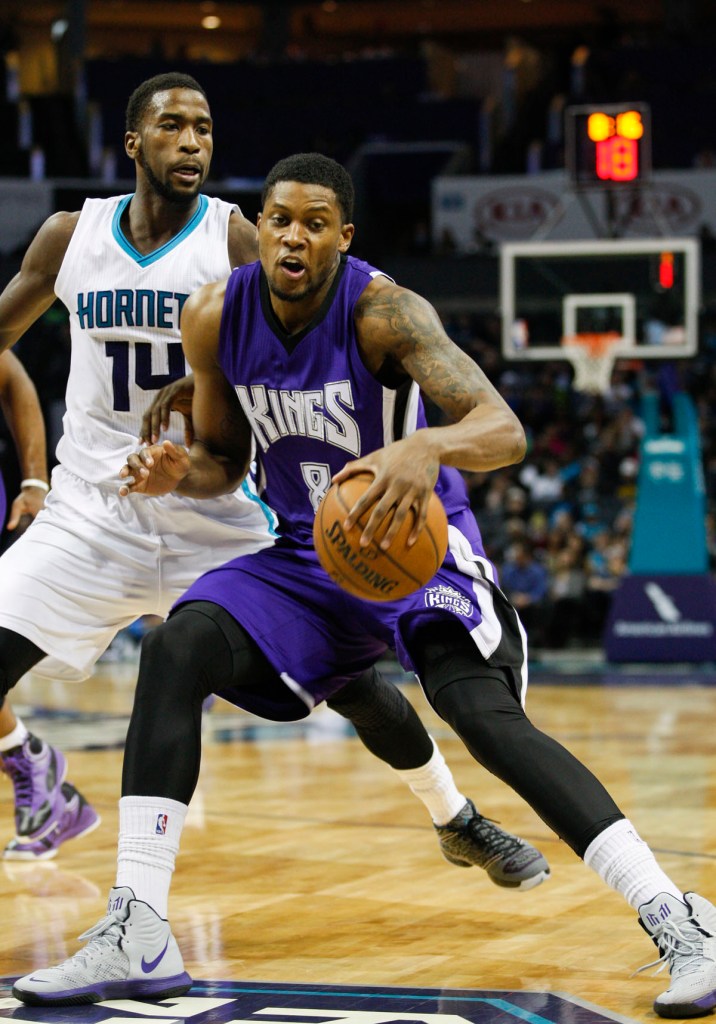 CHARLOTTE, N.C. (AP) — DeMarcus Cousins opened the door to the standup cooler in the locker room and tried to stuff as much of his 6-foot-11, 270-pound body as he could inside to cool down.

Perhaps he was still hot from the fourth quarter.

Cousins was 4 for 4 from the field in the period and finished with 20 points and 14 rebounds, helping the Sacramento Kings snap a four-game losing streak with a 113-106 victory over the Charlotte Hornets on Wednesday night.

He got plenty of help from Ben McLemore, who scored 27 points, and Rudy Gay, who added 26, including several big shots down the stretch.

“We made some good plays down the stretch,” Cousins said. “We did a good job of reading their defense and making plays.”

Cousins and Gay combined for 18 points on 6-of-6 shooting in the fourth quarter to squash the Hornets’ comeback bid.

“When Ben is clicking, myself and Rudy, we’re a good team,” Cousins said.

“He was making some jump shots and ran the court pretty well,” coach George Karl said. “He has been getting some good looks but has been hitting the front of the rim. He’s working on his game, the confidence is coming and tonight he was a guy who I couldn’t take off the floor.”

The loss proved costly to the Hornets — and not just because they entered the night clinging to the eighth-best record in the Eastern Conference.

Just as Charlotte was getting one star player back, another left with an injury.

Kemba Walker had six points in 16 minutes off the bench after missing 18 games following knee surgery, but Charlotte lost center Al Jefferson to a strained right calf late in the third quarter.

Michael Kidd-Gilchrist had 23 points on 9-of-12 shooting for the Hornets. Mo Williams added 20 points and eight assists, and Gerald Henderson had 17 points and a career-high 11 assists for Charlotte.

The Kings took control with about 5 minutes remaining in the game.

Every time the Hornets tried to make a run, Cousins or Gay seemed to have an answer.

Kings: Cousins has scored in double digits in all 49 games he’s played this season.

Hornets: Forward Cody Zeller missed the game with a shoulder injury and is expected to sit Friday against the Bulls. … Walker said he felt “confident” in his knee after the game and hopes to see more minutes moving forward.

A woman sitting behind the Hornets bench suffered a bloody nose when the ball hit her directly in the face off a tipped pass, knocking the glasses off her head. She needed a few tissues to stop the bleeding, but was a trooper and stayed in her seat to watch the rest of the game. Replays showed she was talking to the person next her as the play was developing and was unaware of the ball coming her way.