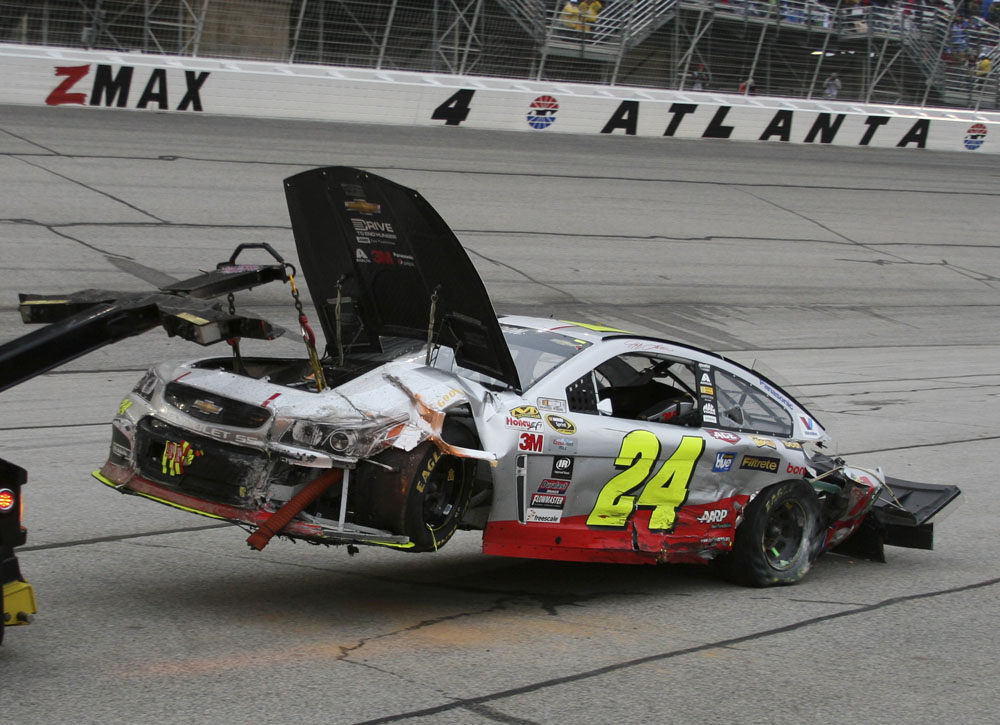 The Associated Press Jeff Gordon's car is towed to the garage after he was involved in an accident March 1 during the Sprint Cup race at Atlanta Motor Speedway.

Gordon said Thursday he may have prematurely questioned NASCAR’s plans for installations of SAFER barriers after hitting a concrete wall two weekends ago in Atlanta. The energy-absorbing walls are common at tracks, but not installed in every place a car might crash.

“Maybe that was me getting a little bit ahead of myself as far as what the phased plan was,” Gordon said. “All I can tell you is that everybody is doing everything they possibly can right now to speed that process up and get these walls covered. And that’s what I’m most happy about right now.”

The popular driver of the No. 24 Chevrolet said Tuesday’s meeting with officials was “informative.”

Gordon spoke at an event in downtown Dallas honoring Gordon during his final full season as a Sprint Cup driver. The first of two Texas races in NASCAR’s top series is April 11 in north Fort Worth, about 35 miles from the Dallas street where Gordon left a few tire marks in some burnouts during a grand entrance.

SAFER barriers were one of the many safety initiatives that came about after Dale Earnhardt’s death in 2001 in an accident on the last lap of the Daytona 500.

The soft walls, a combination of steel and foam, debuted in 2002 at Indianapolis Motor Speedway, and were gradually added to tracks the next year and are currently installed in some form at every track used by NASCAR’s top series.

There’s been increased scrutiny on the absence of SAFER barriers since Kyle Busch broke his right leg and left foot at Daytona last month.

Gordon said the focus of his meeting this week was about plans at Daytona and other tracks to get SAFER barriers in all the spots that NASCAR engineers believe they’re needed.

“It’s a time-consuming thing. It doesn’t happen overnight,” said Gordon, who had a hard hit into an unprotected wall in 2008 at Las Vegas that led track officials to install a SAFER barrier in that spot. “It’s a top priority to really make the tracks even safer than they are today and do it in as timely a fashion as what’s possible from their suppliers.”

Steve O’Donnell, NASCAR’s top racing development officer, was part of the meeting and has said in the past that the series “will continue to collaborate with all of our track partners to find the best safety solutions.”

Texas Motor Speedway president Eddie Gossage said slightly less than half of the outside wall has the SAFER barrier on the 1 1/2-mile high-banked track. He said Texas hasn’t been part of the discussion for more barriers.

“The last thing you want to do is have anybody get hurt, particularly a guy like Jeff who’s so important to you,” Gossage said. “He’s been finding walls that nobody’s ever found in their history of these places.”

Gordon has been on the pole twice in the first three races this season but hasn’t finished higher than 18th. He wrecked at Daytona and Atlanta, and was forced to the back of the field in a backup car in Las Vegas after an accident in the closing minutes of the final practice session.

“It’s not fun to start out like this,” Gordon said. “Luckily we’ve gotten those two poles because the poles have kept the confidence there. We’ve had some good moments throughout the races, but we’re going to have to follow those up with results to keep that confidence high.”