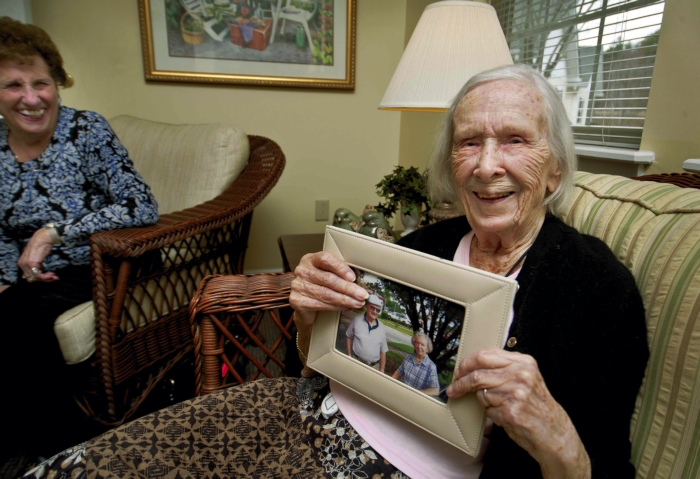 JON C. LAKEY / SALISBURY POST Jessie Kay Jackson is preparing herself for an upcoming birthday party in her honor that she is both looking forward to and dreading. Jackson will turn 100 on Friday and a party by her friends in her neighborhood is expecting to draw over 100 people. Jackson flashes a smile as she holds one of the last photos of her and her late husband, Sherman. Monday, March 9, 2015, in Salisbury, N.C.

SALISBURY — After Jessie Kay Jackson and her husband, Sherman, moved into the Gables subdivision in the fall of 2006, it didn’t take long for the smells of Jessie Kay’s bread-making to spread to her neighbors.

She especially became known for her raisin bread.

“Sherman always said it was all in the slicing,” Jessie Kay recalls because, of course, he did the slicing.

Jessie Kay also proved to have a way with croissants, biscuits and, around the holidays, fruitcake. The native Brit, who despite 69 years of living in the United States has never lost her lovely accent, fell into the habit of having afternoon tea with neighbor Debbie Fowler.

Jessie Kay took her tea the English way, with milk and sugar. The girls talked about everything, and Fowler learned some good Jessie Kay sayings such as, “He doesn’t know an ‘A’ from a bull’s foot,” or “You’re in and out like a dog at the fair.”

“She is a trusted friend,” Fowler says. “I would just open up with her about what was going on in my life.”

Fowler also might discuss her own English heritage, while Jessie Kay says, “I would complain about my husband.” But if she ever did complain about Sherman, whom she loved dearly, it was usually to note how spoiled he was.

“I waited on him hand and foot, didn’t I?” Jessie Kay asks Fowler, before quietly adding for a visitor, “But he was worth it.”

The afternoon teas at the Gables have gone by the wayside since last November, when Jessie Kay became a resident at Carillon Assisted Living. Sherman died about four years ago. More than anyone else, he would have loved the party planned Friday evening at the Gables’ clubhouse.

It will be Jessie Kay Jackson’s 100th birthday, and fittingly, about 100 people are expected to attend.

“It’s not my idea,” she says in protest. “They insisted on giving me a party. I hope I’m worth all of this.”

“Jessie K, you know you are,” says Dot Gandy, a friend from the Gables.

Spend any time with Jessie Kay, and the conversation eventually returns to Sherman, whom she met while waitressing on a second job in Arlington, Va. They would be devoted to each other for 55 years, 44 of which they were married.

Once retired, they did everything together, except bowl. Jessie Kay did not share Sherman’s passion for bowling. Their extensive travels took them all over Europe, to Alaska twice, and they visited all the national parks, as Sherman put his bachelor’s degree in geography from The Ohio State University to good use.

A Columbus, Ohio, native, Sherman always made sure you said the “The” when you mentioned his alma mater, Jessie Kay explains.

When Ohio State’s football team played for the national championship in January, Jessie Kay positioned his picture in front of the television so he could watch the whole game.

Jessie Kay grew up in England’s midlands near Birmingham. Her father died when she was 4, and her mother later remarried, though Jessie Kay wasn’t a big fan of the stepfather.

During World War II, when German bombs were terrorizing England, she remembers her mother fixing raggedy blackout curtains and cursing at the same time. “Damn, that bloody Hitler,”  she would say.

Jessie Kay enlisted with the women’s section of the Royal Air Force and would serve three years, She had post office duties and knew the seriousness of making sure the British airmen received their letters from loved ones back home.

“The mail’s got to go through,” she says.

When Jessie Kay thinks of the dangers she personally faced during World War II, she talks of the Germans’ V-1 buzz bombs and V-2 rockets launched against her country and others.

“I shouldn’t say I was scared to death, because I wasn’t,” Jessie Kay says. “I was young and didn’t know better.”

Her other RAF assignments would take her to Belgium and, by war’s end, Germany.

Jessie Kay met an American soldier from Rowan County while they were both stationed in Gloucester. He would become her first husband, and in 1946, she sailed to the United States on the Queen Mary and settled in Salisbury.

Jessie Kay arrived on the Saturday before Easter 1946. Her first impression?

“I thought it was hot,”‘ she says. “But I got used to that, and I met some lovely people here.”

Her first husband’s family members treated Jessie Kay like one of their own. Despite their support, her marriage didn’t last, and Jessie Kay prefers not to mention his name.

After her marriage dissolved, she traveled with a girlfriend to Washington, D.C., to visit the woman’s sister. She decided to stay, settling into various jobs and living in Arlington, Va.

She worked several years for Victor, an adding machine company, as an office manager, helping a lot of people over the telephone. When she met Sherman Jackson, he was working for the Department of Defense in Washington.

Fowler says Sherman had one of those important  jobs at the Pentagon for which he sometimes had to handcuff a briefcase to his wrist. He proved to be a perfect match for Jessie Kay.

“They threw away the mold, didn’t they, Debbie?” Jessie Kay says.

Their courtship lasted 11 years before they married in 1967. Fowler and Gandy describe Sherman as genuine and kind and agree with Jessie Kay that the mold was broken with him.

“He was just different,” Jessie Kay says. “My second husband was the best thing to ever happen to me.”

Sherman Jackson suffered from a rare blood disease, and he became a “lifetime patient” at the National Institute of Health in Washington.

“They helped him, and he helped them,” Jessie Kay says.

At the recommendation of his doctors, the couple retired to the warmer climes of Sarasota, Fla. Sherman would return to the NIH in Washington for treatment three to four times a year and stay up to three weeks at a time, Jessie Kay says.

“Then we came back here,” Jessie Kay says, “because I remembered what a nice little town it was.”

The small Gables community was a good place to make fast friends, who learned quickly to include her middle name of “Kay” when addressing her or talking about her with others. Long ago, Jessie Kay tired of people making obvious references to her name’s being the same as civil rights leader Jessie Jackson, so the “Kay” has to be included.

She anticipates the obvious question of any 100-year-old and says there’s no secret to her longevity. It’s not genetics. There’s no special potion. She simply likes her tea nice and hot.

Fowler and Gandy say Jessie Kay has never been a lover of processed food and made it a point to cook for herself and Sherman. Otherwise, she’s just a tenacious person, full of spunk.

“She doesn’t let anything stop her,” Gandy says.

Today, there are only second cousins left in England, and they keep in contact with Jessie Kay regularly — often through calls or emails to Fowler. They won’t be able to attend Friday’s 100th birthday party.

Jessie Kay says she is looking forward to her party — and dreading it at the same time.

One thing’s for sure, her old neighbors at the Gables will be ecstatic to see her.

“We miss the bread,” Fowler says.

“I miss it, too.” Jessie Kay answers.