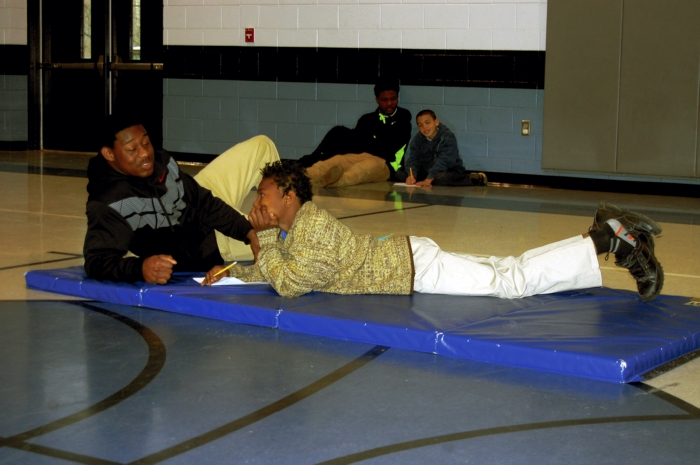 For most high school students, it’s nearly impossible to get out of bed and make it to school on time, but a group of A.L. Brown students voluntarily show up early week after week to mentor elementary, intermediate and middle school students.

On Tuesday mornings, you can find some of these high schoolers at Fred L. Wilson Elementary School scattered around the gym talking, playing games or even competing in a game of basketball with the elementary students.

The mentoring program runs from September until mid-May, and the mentors work one-on-one with the same mentees all school year long.

“The Brown students have really made a connection with them,” said Fred L. Wilson guidance counselor Jessica Patton.

Herman Freeman, a senior at A.L. Brown, volunteered as a mentor for the first time last week. He was paired with fellow newcomer Marquis Parker, a third-grade student.

Freeman was warm and welcoming from the start.

“Hey, Marquis, my name is Herman,” he said as he greeted Parker.

The two settled down on the floor on the opposite side of the gym with another mentor-mentee pair – third-grader Zane Sanguianba and 12th grader Cameron McKnight.

“We’re making goals,” Freeman explained as they went over the sheet they were working on.

Parker said his goals were to get better at reading and to pay better attention in class. He plans to accomplish those goals by finding more books and reading more.

Sanguianba said he enjoyed the time because sometimes they get to play basketball.

McKnight said he got involved when his guidance counselor told him about the mentoring program.

“I like being a positive factor in kids younger than me’s life,” he said.

Patton said the elementary students get “so excited” about their mentoring sessions. “Every day they come in and ask, ‘Is it Tuesday?’”

According to their teachers, she added, almost all the students have seen positive change over the course of the school year.

“This time has an effect,” Patton said.

Not only do all the students love it, but they also want to keep doing it, she added.

“Hopefully we’ll get to all of them,” said program coordinator and A.L. Brown teacher Michele Pitts.

“We have seen great growth,” Pitts said, adding that what started as a small group about five years ago has blossomed into a program with roughly 100 mentors.

The level of time invested in the program varies from mentor to mentor. While some volunteer one morning each week, others volunteer several mornings at different schools.

“They’re awesome making sure they’re here,” Pitts said. “They see the value in helping others.”

At the beginning of the school year, the mentors take an inventory and the elementary, intermediate and middle school guidance counselors then pair their students with the best mentor to fit with their needs and interest.

Those guidance counselors also choose the activity for each week, which typically includes reading and guided conversation of some sort.