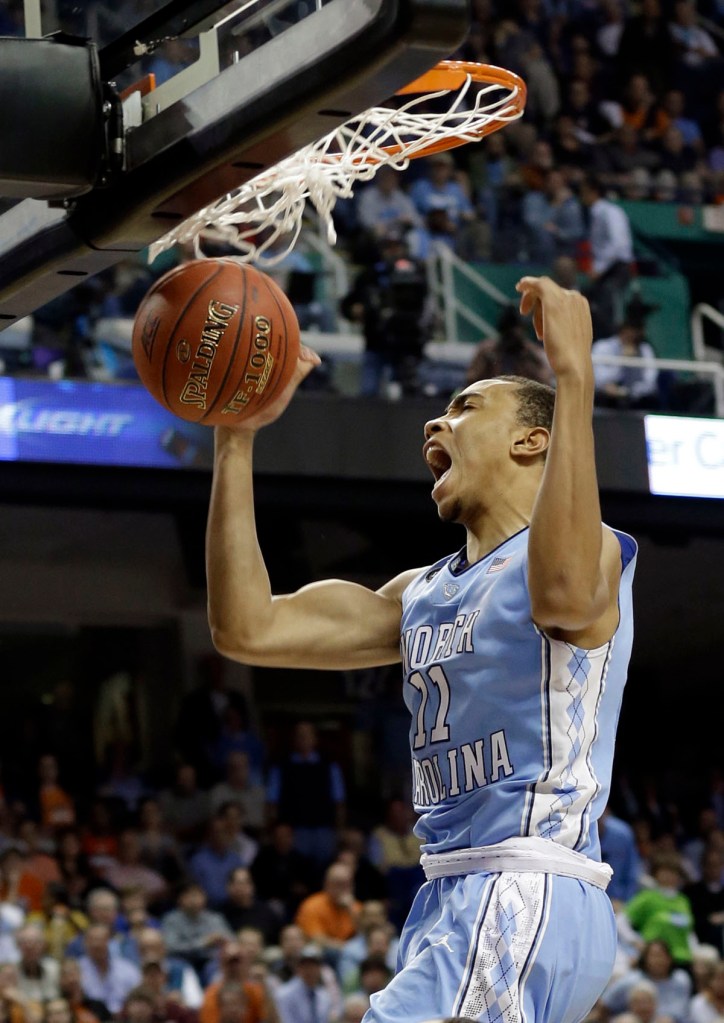 The Associated Press North Carolina's Brice Johnson dunks against Louisville during the second half Thursday in the quarterfinals of the Atlantic Coast Conference tournament in Greensboro. The Tar Heels defeated the Cardinals and will play Virginia in Friday's semifinals.

GREENSBORO, N.C. (AP) — Roy Williams was fuming. The North Carolina coach ripped off his jacket and flung it into a chair in disgust. He stomped around his players during a first-half timeout, screaming for them to play tougher or watch Louisville run away with their Atlantic Coast Conference tournament matchup.

“My manhood was definitely challenged,” he said.

Johnson responded by scoring 18 of his 22 points after halftime to help the 19th-ranked Tar Heels outlast the 14th-ranked Cardinals 70-60 on Thursday in the quarterfinals.

Marcus Paige added 13 points for the fifth-seeded Tar Heels (23-10), who took control in the final 7 minutes to take the third tough matchup between the teams this season.

UNC used an 8-0 run to finally push ahead for good, with Kennedy Meeks coming up with some key plays despite being limited by a recent illness. The Tar Heels then went 6-for-6 at the line in the final minute to seal it and earn a semifinal date with No. 3 Virginia.

To listen to Williams, though, the reason for UNC’s first win against a higher-seeded team in a dozen years was more effort than Xs and Os.

“They manned up and decided to play better in the second half,” Williams said.

Terry Rozier scored 20 to lead the fourth-seeded Cardinals (24-8), who shot just 8 for 36 (22 percent) after halftime — including a 5 1/2-minute drought that tipped a tight contest toward UNC.

Louisville missed 15 of its last 17 shots, a remarkable turnaround considering the Cardinals shot 52 percent in the first half and appeared to have early control. And the Cardinals finished just 4 for 22 from 3-point range in its ACC tournament debut.

“We had our way against man-to-man,” Louisville coach Rick Pitino said. “They switched to zone and we went cold. We had a lot of good looks but we just couldn’t put the shots down.”

Just as with the previous matchups, this one was another fight — and in all three games, the winning team overcame a double-figure deficit.

Meeks played a big role in that. The 6-foot-9 sophomore had missed the UNC’s ACC tournament opener because of illness and a fever, which caused him to miss two practices. He looked as if he was laboring through much of his court time, only to knock over Mangok Mathiang to muscle in a shot inside then follow with a stickback to cap UNC’s 8-0 run to a 64-57 lead with just under 4 minutes left.

He followed that by blocking a baseline drive by Rozier.

“I think it was important,” Meeks said of his play. “But at the same time, I think the team effort was there for us, at all times.”

UNC: Justin Jackson added 10 points. … UNC shot 50 percent after halftime. … Freshman Theo Pinson missed his second straight game due to soreness in his left foot. He had recently returned from a monthlong absence after breaking that foot in late January.

No big lead was safe in this three-game series.

Louisville led 30-20 on Blackshear’s 3-pointer with 5:18 left in the first half Thursday.

Williams earned his 747th career win to pass former Kansas coach Phog Allen for 15th on the Division I wins list. Allen’s name is on the home arena for Kansas, where Williams earned 418 of his wins over 15 years.

“I’ve been very fortunate, had big-time players that were willing to take all my antics and screaming at them and then turn around and play better basketball like Brice did today,” Williams said. “I didn’t realize that. That’s pretty neat.”