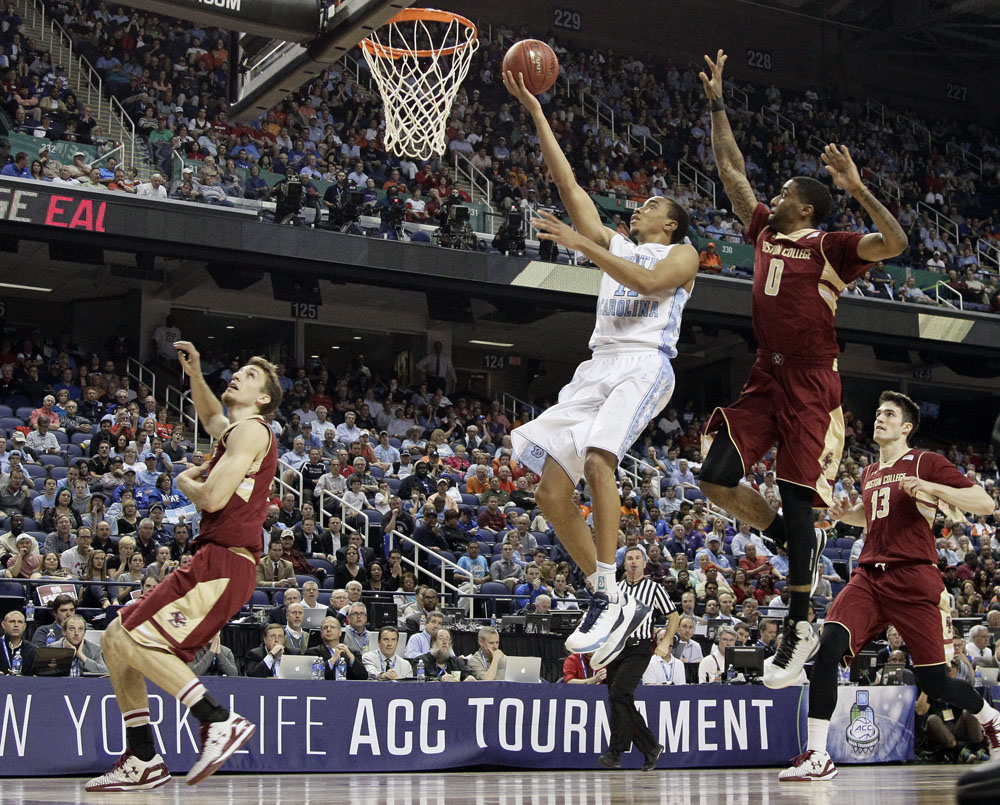 The Associated Press North Carolina's Brice Johnson (11) drives past Boston College's Garland Owens (0) during the first half Wednesday in the second round of the Atlantic Coast Conference tournament in Greensboro.

GREENSBORO, N.C. (AP) — North Carolina’s players were in no mood for a repeat of last year’s brief stay at the Atlantic Coast Conference, and they didn’t want to watch Boston College’s Olivier Hanlan have another big game against them.

Instead, the No. 19 Tar Heels slowed Hanlan and led most of the day to beat the Eagles 81-63 on Wednesday in the second round of the tournament, a much better debut in Greensboro than the one-and-done exit of a year earlier.

“Coach (Roy Williams) didn’t talk about it a lot but I brought it up today as we coming to the gym, that we lost the first day we played last year,” junior Marcus Paige said. “That it was bad and we went straight back home. I was telling the guys, ‘You don’t want that feeling.’”

Paige and Brice Johnson each scored 17 points to lead the fifth-seeded Tar Heels (22-10), who played without forward Kennedy Meeks. UNC had trouble putting away the 12th-seeded Eagles (13-19) for much of the second half, but pulled away late and won its seventh straight meeting to set up a matchup with No. 14 Louisville.

Among the biggest keys for that success: making Hanlan — an all-ACC guard who scored 30 in the only regular-season meeting between the teams — work for his points.

Hanlan scored 18 points, but went just 5 for 19 from the field, including 1 for 5 from 3-point range. The Tar Heels rotated several defenders, though Williams credited J.P. Tokoto’s work on him in particular.

“He’s big time, a big-time player, and our goal was to try to make sure he didn’t shoot a great percentage,” Williams said.

UNC led by 13 at half and never by fewer than eight from there, shaking off a cold start to the half and finishing at 52 percent shooting after the break.

Boston College: Aaron Brown scored 20 points to lead BC. … The Eagles shot 40 percent, including 6 for 21 from 3-point range. … Hanlan wouldn’t comment on whether he would return for his senior season.

Paige again looked healthier after battling a foot injury and had playing through pain since at least January, finishing with nine assists, six rebounds and two steals.

Meeks has an illness that includes a fever, keeping him sidelined for two recent practices. Williams said he doesn’t expect Meeks to play, while Meeks said he felt close and “hopefully” could play Thursday.

In addition, UNC also played without freshman guard Theo Pinson, who was a game-time decision due to a sore left foot. He had recently returned from a monthlong absence after breaking that foot in January. Pinson was noncommittal about his status, saying he is going to “go day by day.”