We can all stand to learn from OU video 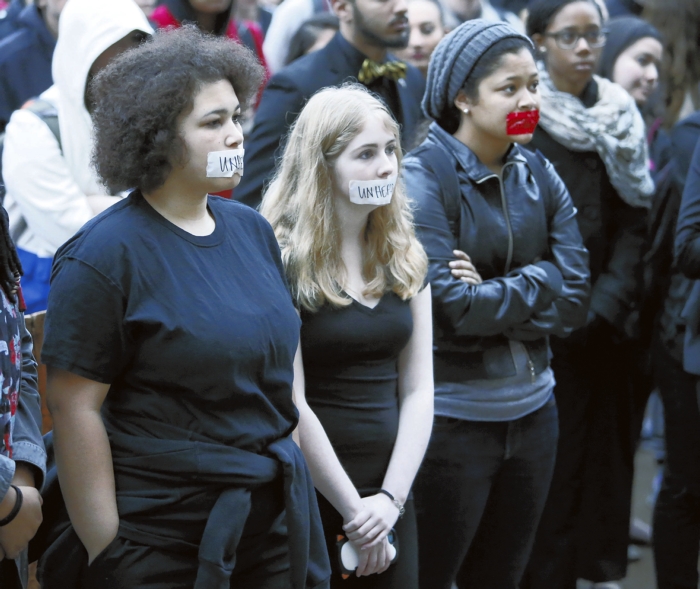 Students at the University of Oklahoma protest racist comments made by a fraternity on Monday, March 9, 2015 in Norman, Okla. University President David Boren lambasted members of Sigma Alpha Epsilon fraternity on Monday who participated in a racist chant caught on video, calling them disgraceful and their behavior reprehensible, and ordered that their house be vacated by midnight Tuesday. (AP Photo/The Oklahoman, Steve Sisney)

University of Oklahoma President David Boren summed it up pretty well Monday morning in his remarks at a protest and rally on campus following the release of a racist video involving OU students. Disgraceful, indeed.

The cellphone video was made aboard a bus that carried members of the Sigma Alpha Epsilon fraternity to a weekend event. The video, in which several young men take part in a truly vile song aimed at blacks, was released anonymously Sunday to The OU Daily, the university’s student newspaper, and quickly went viral.

The video captures many of those on the bus singing, to the tune of “If You’re Happy and You Know It.” Instead they sing, “There will never be a (N-word) in SAE,” and include a line about lynching. It reflects a mindset from the 1960s.

Reaction was swift, as it should have been.

Sunday night, the fraternity’s national office ordered the Norman chapter disbanded. (The OU Daily reported that individuals were seen exiting the fraternity house with suitcases about 11:30 p.m.) Boren on Monday said all ties between the university and the local SAE chapter had been severed. He ordered the house closed, and said members had until midnight Tuesday to move out.

In addition, an investigation was underway to see whether further sanctions could be applied to individuals who took a leadership role in the incident, Boren said. “We will look at all possible punishment and what is available under the law.”

Meantime it would be interesting to know the genesis of this chant. Washington Post reporter Terrence McCoy noted that the fraternity had come under scrutiny on several occasions through the years, including in 2013 when the chapter of Washington University in St. Louis was suspended for allegedly photographing black students “while pledges recited rap lyrics laced with racial slurs.”

Yet this episode has cast a poor light on more than just the SAE fraternity at OU. Although Boren said “these values (reflected in the video) are not our values,” the fallout also attaches to the university and the state as a whole. Fair or not, Oklahoma is what many around the country will most remember after watching reports about this story. That’s among the many truly unfortunate aspects to this story.

Boren said the best way to send a message to the campus and indeed the country is to make it clear that “there is zero tolerance for this kind of racist and bigoted behavior.” The actions taken against SAE make that clear.

We’ll add our own: That these disgraced college students — and all of us — manage to learn from this awful event something about decency and kindness and the consequences of our actions.