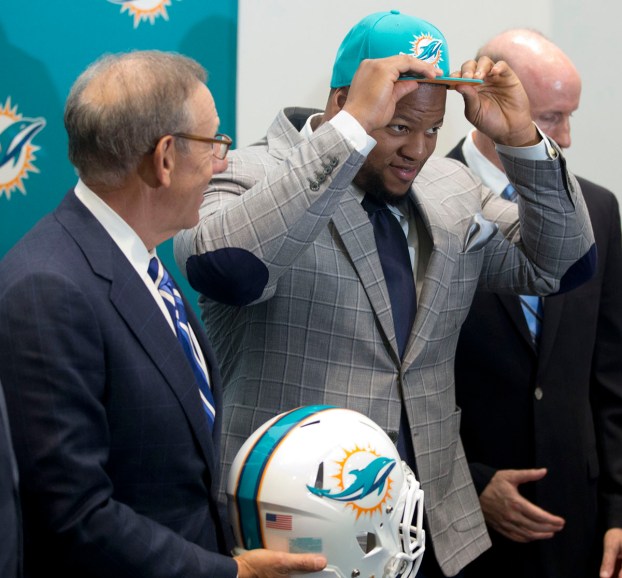 The Associated Press Miami owner Stephen Ross, left, talks to his newest player Ndamukong Suh on Wednesday as Suh puts on a Dolphins cap during a news conference in Davie, Fla. Suh signed a $114 million, six-year deal with the Dolphins on Wednesday.

The free agency frenzy, trading outbreak and stunning retirements of the first day of the NFL’s business year gave way to one headliner Wednesday: Ndamukong Suh.

They expect him to plug the line against the run, and threaten — and sack — quarterbacks.

“I’m excited about the pressure,” Suh said, referring not to the pass rush but to the expectations that come with such a contract. “I don’t necessarily look at it as pressure. I look at it as something I’m built for.”

Suh, the second overall pick in 2010, had 36 sacks in five seasons in Detroit, including 8½ in 2014. His presence should boost the performances of ends Cameron Wake and Olivier Vernon, who have combined for 38 sacks in the past two seasons.

While Suh was leaving the NFC North, one of the prime offensive tackles on the market was staying there.

Green Bay re-signed right tackle Bryan Bulaga, ensuring that the NFL’s highest-scoring team will keep its entire offense intact for 2015. The deal is believed to be for five years and $34 million, with an $8 million signing bonus.

Some second-tier quarterbacks were on the move Wednesday.

The Jets acquired Ryan Fitzpatrick from Houston, and he was replaced there by Brian Hoyer.

Fitzpatrick, 32, is expected to push Geno Smith for the starting job with New York. He reunites with Chan Gailey, who coached Fitzpatrick in Buffalo and is the Jets’ new offensive coordinator.

Hoyer, formerly of the Browns, will compete with Ryan Mallett with the Texans. Mallett was re-signed earlier this week.

“When you look at the offensive side of the ball — Arian Foster, (DeAndre) Hopkins — those types of guys, the offensive line, I’m excited to get a chance to be a part of this,” Hoyer said.

There was one retirement, by cornerback Cortland Finnegan, which was expected — as opposed to Tuesday’s retirements of three players in their primes: Patrick Willis, Jake Locker and Jason Worilds.

In other moves Wednesday:

—Chicago agreed to terms with LB Pernell McPhee on a five-year contract.

—Cincinnati refortified its offensive line be re-signing G Clint Boling and OT Eric Winston, the president of the players’ union.

—Minnesota re-signed DT Tom Johnson, who had 6 1-2 sacks in 2014, and added QB Shaun Hill to back up Teddy Bridgewater.

—Oakland bulked up its defense with DT Dan Williams and LB Curtis Lofton.

College basketball: At Wake, it was the season of ‘what if?’