NASCAR: Kurt Busch reinstated by NASCAR, will race in Phoenix 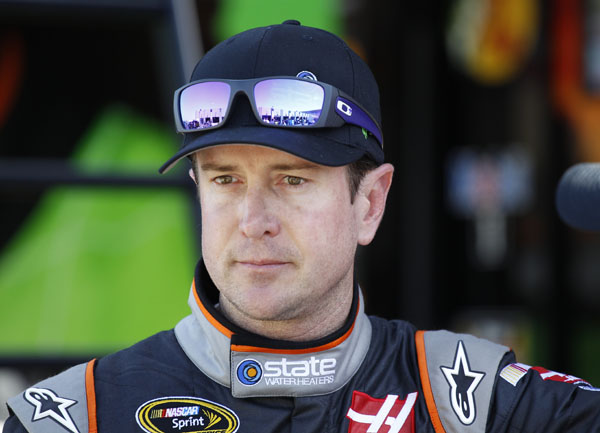 The Associated Press In this Oct. 9, 2014, file photo, Kurt Busch looks from the garage after practice for the NASCAR Bank of America Sprint Cup series auto race at Charlotte Motor Speedway in Concord, N.C. NASCAR lifted its suspension of Kurt Busch on Wednesday, March 11, 2015, and ruled the former champion can compete in the title Chase should he qualify. Busch missed the first three races of the season when NASCAR suspended him for an alleged domestic assault on his ex-girlfriend.

CHARLOTTE, N.C. (AP) — Kurt Busch was cleared Wednesday to get back in his race car and attempt to rebuild a career that was halted two days before the Daytona 500 when NASCAR suspended him for allegedly assaulting his ex-girlfriend.

“It’s been torture sitting out of the car,” Busch said in a conference call. He called the allegations against him “a complete fabrication.”

“I never did anything of the things I was accused of,” he added. “I never wavered in this whole process because of the confidence in the truth.”

Busch missed the season’s first three races during the suspension, the third of his career. In reinstating the 2004 champion, NASCAR ruled he will be eligible for the title-deciding Chase should he qualify. He will return to competition this weekend at Phoenix International Raceway in the No. 41 Chevrolet for Stewart-Haas Racing.

He said he will replace his longtime nickname “The Outlaw” with his signature above the door of his car.

“We have made it very clear to Kurt Busch our expectations for him moving forward, which includes participation in a treatment program and full compliance with all judicial requirements as a result of his off-track behavior,” NASCAR executive vice president Steve O’Donnell said.

Busch was suspended Feb. 20 when a Delaware judge ruled he likely assaulted ex-girlfriend Patricia Driscoll in his motorhome in September at Dover International Speedway. He lost two rounds of appeals on the eve of the season-opening Daytona 500.

Last week, the Delaware attorney general declined to charge Busch for the incident with Driscoll — a move O’Donnell said “removed a significant impediment” to reinstatement.

Busch said he had been led to believe that criminal charges would be the determining factor in NASCAR taking action, and was surprised when he was suspended before the attorney general made its decision.

“The way that NASCAR reacted, it was different than what we had been told,” Busch said. “They were more focused on the criminal side, as were we. But the commissioner’s ruling was not necessarily what was the important factor here. The important factor is that what I was accused of was a complete fabrication.”

Busch has also complied with NASCAR’s reinstatement requirements, the terms of which have not been disclosed. O’Donnell said a health care expert recommended Busch’s immediate return.

“I’m deeply concerned about the message NASCAR is sending by letting him compete for the championship after he was found by a judge to have committed an act of domestic violence,” Driscoll said in a statement. “But I am gratified, at least, that NASCAR’s decision comes with the mandatory condition that he follow through on the treatment he so clearly needs.”

Busch did not reveal what he did to satisfy NASCAR, but indicated he wished he had participated in such a program earlier in his career. He also said he had been encouraged by NASCAR chairman Brian France, who urged him not to change as a driver.

“It’s a road map that they laid out that I am respecting, and it’s created such a good foundation to utilize that I wish I had done it sooner,” Busch said. “Talking with Brian France and going through this road, he told me, ‘Don’t change. Don’t be the person that is different in the car. Be a person that’s different outside the car.’

“So Brian said, ‘Go be yourself in that car, that’s what we really love. We love Kurt Busch behind the wheel.’ That’s my focus, to be humble throughout this whole process and let actions speak louder than words.”

Busch’s return was also cleared by Chevrolet, which had suspended its relationship with Busch. SHR is a Chevrolet team.

The new Chase for the Sprint Cup championship format introduced last season gives drivers an automatic berth into the 16-driver field with a victory during the regular season. But, a driver must be ranked inside the top 30 in points to use that automatic berth.

Busch currently has no points in the No. 41 Chevrolet, a car Haas pays for out of pocket specifically for Busch.

It was Haas who gave Busch the opportunity to resurrect his career as one of the most talented drivers in NASCAR. The 36-year-old has a history of blowups on and off the track that date back to his rookie season. He was suspended in 2012 by NASCAR for threatening a reporter, and parked for the final two races of the 2005 season by Roush-Fenway Racing after he was pulled over by police in Arizona.

Haas, wanting a driver who could take his machine tool manufacturing company to victory lane, offered Busch a ride in a new fourth car at SHR when Busch found himself driving for low-budget teams. Busch was fired at the end of 2011 by Roger Penske for a series of on- and off-track incidents, and he spent two seasons driving for low-budget teams before Haas extended the olive branch.

Busch has 25 career wins, but only one since 2011. It came last year, his first season with SHR, and qualified him for the Chase. Driscoll alleged the assault occurred two days before the third Chase race, when Busch was in danger of being eliminated from the field. He was indeed knocked out of the Chase that weekend.

Busch still must comply with guidelines set by Family Court Commissioner David Jones, who granted the no-contact order for Driscoll that led to his Feb. 20 suspension, two days before the season-opening race at Daytona. Jones wrote in his opinion that he believed Busch could lash out again and has a propensity to lose control in response to disappointing or frustrating situations involving racing.

Jones ordered Busch to be evaluated to see if there is a “treatable mental health condition.” He also said Busch must follow any suggested treatment plans. Busch is appealing Jones’ ruling.