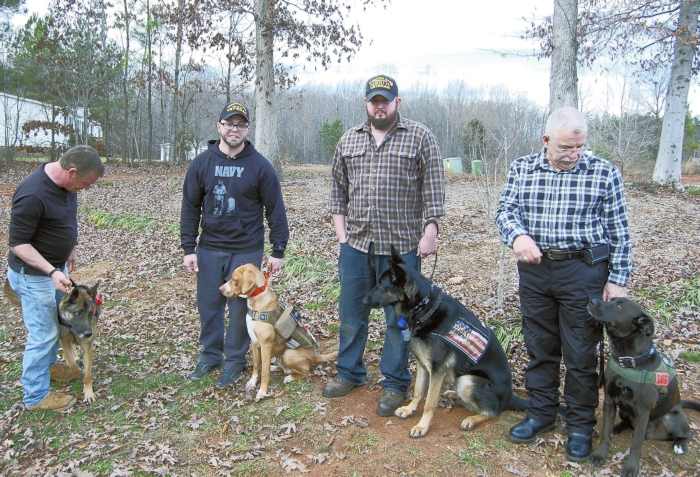 Andy Eury is worried he’ll revert back to self-medicating with alcohol now that his beloved service dog, Briggs, was killed Monday night following a hit and run on Mahaley Avenue.

Eury and Briggs, a black and brown German Shepherd he’s had since October, went to Food Lion. The two were about to cross the street just before the crash when Eury had Briggs stop and sit. Eury checked both ways, but then stopped when he saw a vehicle flying down the road.

“They hit him, dragged him 20 to 30 yards,” Eury said, overcome with emotion.

He saw no brake lights and the vehicle swerved, Eury said, as if to shake the dog free of the vehicle and continued. At that moment Eury knew he just had to get Briggs out of the middle of the road.

Police said the vehicle was a dark-colored Toyota, but Eury said, it happened so quickly that he believes it may have been silver.

Briggs, broken and afraid, nipped at Eury and even bit him on the hand as Eury tried to pull him to safety. He didn’t care — he just had to keep his best friend calm.

Eury said two women stopped to help him. One woman gave him a mat she had in her car, which he tried to roll the dog onto, but it didn’t work. His roommate heard the crash and ran outside since the accident happened in their driveway.

Salisbury Police officers J.J. Scrip and J.S. Lakey responded, placed Briggs inside a K-9 unit, along with Eury and went to the Cabarrus Emergency Veterinary Clinic in Kannapolis. Medical personnel said Briggs’ back was broken and Eury had no choice but to put the dog to sleep.

Eury received Briggs with the help of Paws 4 Soldiers, a nonprofit that helps veterans find suitable dogs to help them cope with disabilities. Eury, who served two tours in Iraq, has post-traumatic stress disorder, or PTSD.

The two went everywhere together, Eury said. Even getting on the bus Tuesday morning, the bus driver asked about Briggs.

Eury said he’s very grateful to the Salisbury Police officers who drove him to the emergency clinic.

“I was surprised. But they knew this dog was no household pet. He was my best friend,” Eury said.

Eury has found it hard to sleep and has had haunting dreams about Briggs’ death and his time in Iraq.

“I’m lost. I don’t want to go home. His toys are there. His bed beside my bed is there,” he said.

“That dog was really everything to me,” Eury said.

He’d quit drinking since Briggs came into his life. He admits he was self-medicating with alcohol and fears he may revert back to old habits. He knows he can’t drink because it won’t do Briggs justice, Eury said.

“He never left my side. He watched my back. He helped me readjust to civilian life,” Eury said.

Being in the military, he was somewhat numb to death, but Briggs’ death has affected him like losing a fellow Marine.

Police said no law has been broken, but in most cases people usually stop out of common courtesy.

He doesn’t want the driver to be charged and doesn’t know what he’d say to them if he ever had the opportunity.

“I hated that he suffered and that there’s no emergency vet here in Salisbury,” Eury said.

Although with Briggs’ injury, even if there were a closer emergency vet clinic, the result would’ve been the same.

This isn’t the first loss of a animal companion that Eury has endured. While at Camp Lejeune, Eury had a German Shepherd named Rowdy. Rowdy one day broke off his chain and was hit and killed by a car.

Briggs’ trainer, Barbara Earnhardt, founder of Paws 4 Soldiers, said she’s hoping to get Eury another dog as soon as possible.

Eury is reluctant to take on another dog, but Earnhardt insists he needs one.

She said a fundraiser is in the works via the Paws 4 Soldiers website. The majority of the cost comes from training.

“It’s a sad situation. Briggs was taken way too soon. He was a huge part of Paws 4 Soldiers and we’ll really miss him,” Earnhardt said.