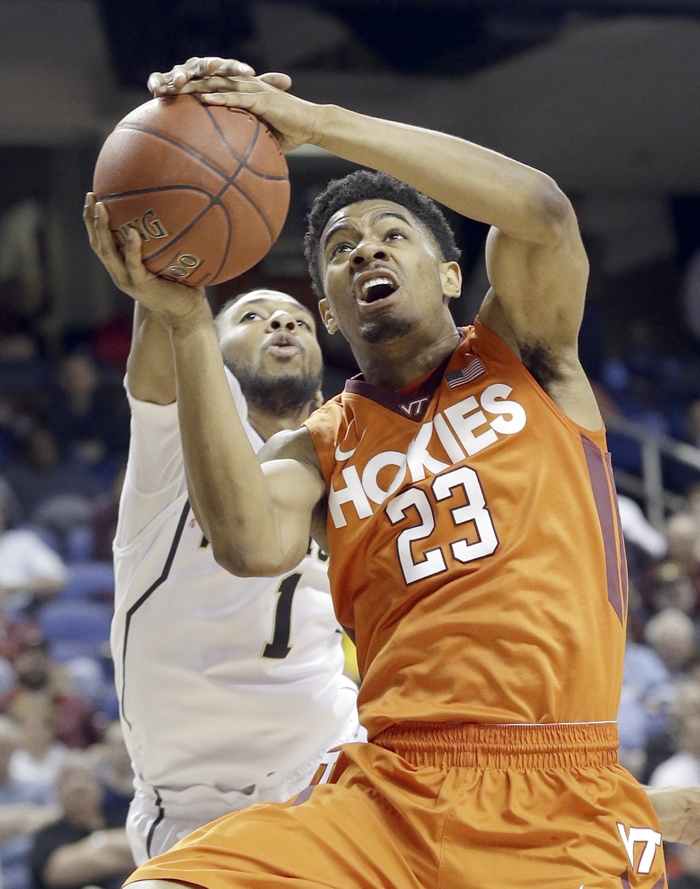 Virginia Tech's Jalen Hudson (23) drives past Wake Forest's Madison Jones (1) during the first half of an NCAA college basketball game in the first round of the Atlantic Coast Conference tournament in Greensboro, N.C., Tuesday, March 10, 2015. (AP Photo/Gerry Broome)

GREENSBORO (AP) — Jalen Hudson is playing hard — and that earned Virginia Tech at least one more day at the Atlantic Coast Conference tournament.

The freshman hit a jumper with 11.7 seconds left and the Hokies followed that with a defensive stop to seal an 81-80 victory over Wake Forest on Tuesday in the first round.

Hudson finished with a season-best 32 points — the most by a Virginia Tech player in an ACC tournament game — for the 14th-seeded and freshman-dominated Hokies (11-21).

“I’ve said since Thanksgiving that Jalen was our most talented player, but he didn’t play hard enough to be that every game,” first-year Tech coach Buzz Williams said. “When he plays hard, he’s really good, and when he doesn’t play hard, he’s just a 6-foot-4 guard (who) doesn’t play hard. He’s growing up like the rest of the freshmen are.”

They shot 48 percent, committed a season-best four turnovers and withstood a final-seconds flurry from Wake Forest to snap a seven-game losing streak and earn their first ACC tournament win in three years.

Virginia Tech called timeout and got the ball to Hudson, who drove the lane and banked in the go-ahead jumper in traffic.

“It wasn’t really a play,” Hudson said. “It was our mentality.”

Miller-McIntyre raced downcourt but lost the ball out of bounds as he was stripped by Hudson with 6.1 seconds left, and Wake Forest kept the ball after the officials reviewed the play.

Mitchell Wilbekin inbounded it to Mitoglou, whose jumper went off the rim. Thomas’ putback attempt caromed off the iron and so did Miller-McIntyre’s tip-in attempt as the horn sounded.

“I guess it wasn’t meant to happen,” Miller-McIntyre said. “I was in the right position and got a hand on the ball, but it just rolled out.”

Ahmed Hill added 12 points for the Hokies, who let an 11-point lead slip away in the second half before recovering.

They will play sixth-seeded Miami (20-11) on Wednesday night in the second round, with that winner drawing third-seeded Notre Dame (26-5) in the quarterfinals Thursday night.

Cornelius Hudson had 14 points and hit four 3s while Mitoglou finished with 11 points and three 3s for Wake Forest, which trailed by five with less than a minute to play. Hudson’s 3 with 54.9 seconds remaining started that rally.

Wake Forest: For the third time in five years, the Demon Deacons finished winless away from Winston-Salem against ACC teams. … They ended coach Danny Manning’s first season with three straight losses and their only one ACC tournament win since 2007 came last year.

This was the second time in 15 days that the Hokies put the ball in Hudson’s hands with the game on the line. Virginia Tech had a chance to beat then-No. 4 Duke on Feb. 25 but Hudson missed a layup at the end of regulation — the Hokies insist he was fouled — and the Blue Devils won 91-86 in overtime. The winning bucket in this game came on a similar play: “I kind of learned from the Duke game because I know in the last seconds like that, refs don’t want to put the game in their hands,” Hudson said. “I tried to finish by avoiding contact.”

Virginia Tech: Plays Miami on Wednesday night in the second round of the ACC tournament.