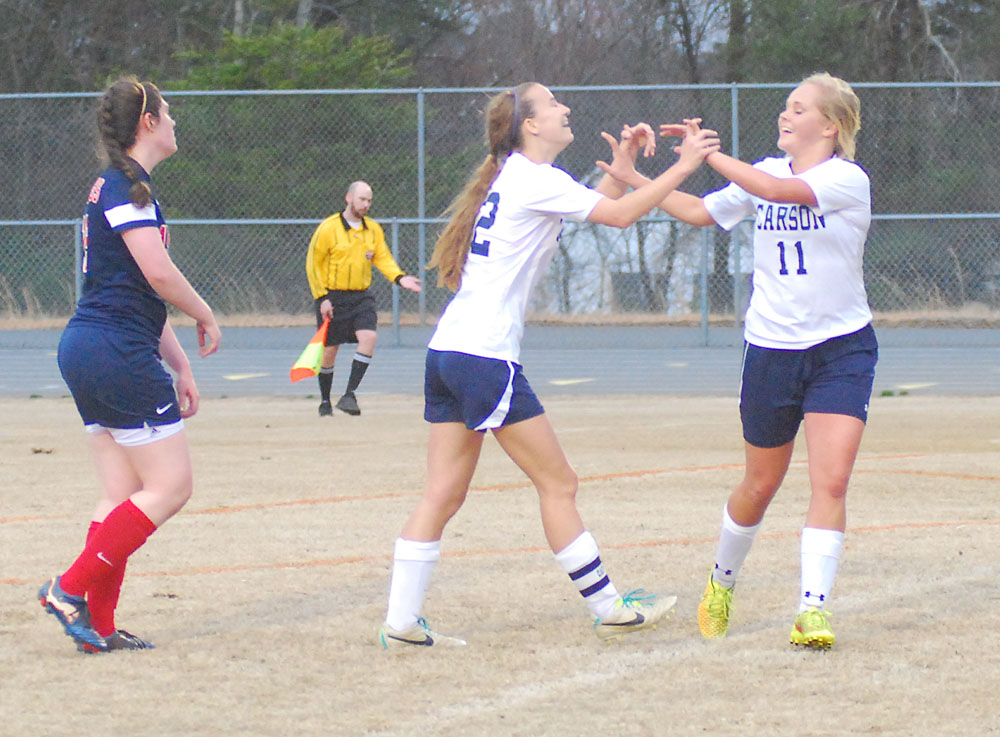 ADAM HOUSTON/THE SALISBURY POST Carson's Sarah Safrit (12) and Hannah Smith (11) celebrate Safrit's goal late in the first half Wednesday of the Cougars' 7-0 win over the Mustangs in a South Piedmont Conference game.

CHINA GROVE — Carson broke its huddle at the start of the second half chanting, “1-2-3. Finish it.” Already ahead 4-0, Cierra Josey needed only 18 seconds to score her second goal of the game for a 5-0 Carson lead.

Sarah Safrit, Cassie Howard and Josey all scored two goals and Mia Trexler contributed one in the Cougars’ 7-0 shutout of the Mustangs. It was the second shutout in as many days for Carson (2-0, 2-0 SPC), which defeated Central Cabarrus 4-0 on Tuesday in the season opener.

“I’d say the first five minutes we were hanging back a bit, and I’m not sure if it’s because it’s the beginning of the season and we’re a little fatigued or we’re just trying to figure out the pace of the game,” Carson head coach Lauren West said. “But then after that first five minutes, we kind of took it to them and we kept moving around.”

Safrit scored her second goal of the game with 1:32 left in the half on a shot from outside the box toward the right post.

A minute later, Howard broke up an East Rowan possession and centered the ball for Josey. The shot made it just over East Rowan goalkeeper Kennedy Lambert with 16.5 seconds left in the first half.

It was the type of play West expects from Howard, a senior midfielder.

“Cassie is the one who just kind of sets the pace for the game,” West said. “She is the person we look for. We have several people we put it to, but she just takes control of the center midfield and just dominates.”

Carson has an influx of youth on its roster. Eleven of Carson’s 22 players are freshmen. Five of those — Hayat Myers, Hannah Smith, Alisia Lopez-Lara, Sarah Musselwhite and Rebekah Lippard — started the first two games.

“We have a lot of talent,” West said. “We’re very fortunate. The ones we have, we’re getting them some experience and it’s just going to keep getting better.”

East Rowan (1-1, 1-1 SPC) went into Wednesday’s game on the heels of a 2-0 shutout of Concord on Tuesday. The Mustangs, like every spring sports team, had a limited amount of practice days before the start of the season and are still learning which formations work best and which players fit best where.

“We’re definitely still figuring it out. We’re kind of young this year,” East Rowan head coach Megan Smith said. “We’re definitely moving some things around with different formations. Definitely, they were the better team today. We just have a lot of things to figure out still.”

Lambert made a few aggressive plays in the net. With 28 minutes left in the game, Safrit made a run to the goal. Lambert made a save from point-blank range to stop what looked like a sure goal.

“She made a couple of great saves, but she still has some work to do,” Smith said.

Lambert was also whistled for a foul on Josey as she dove to the ground to break up a scoring chance. That set up a penalty kick by Safrit with 27 minutes left that put Carson ahead 6-0.

NASCAR: Kurt Busch reinstated by NASCAR, will race in…