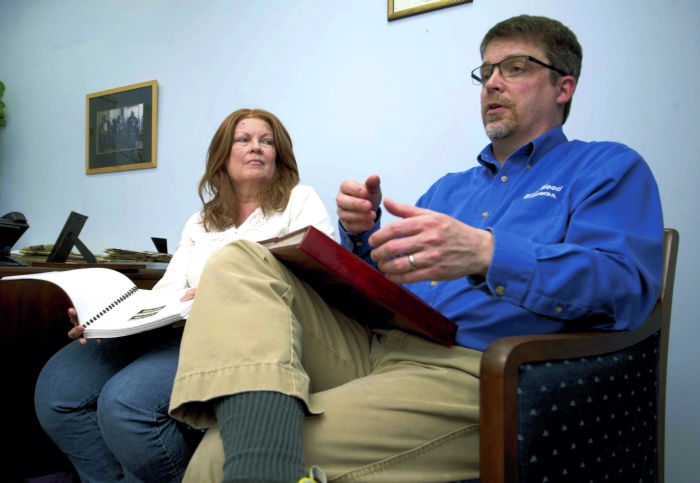 JON C. LAKEY / SALISBURY POST Frances Morgan Morris and her brother Eddie Morgan talk about the recent information they received from the US Air Force about the discovery of human remains for their father, US Air Force Master Sergeant Edwin Morgan.

SALISBURY — After a months-long regimen of chemotherapy, Frances Morgan Morris received news Feb. 16 that every cancer patient wants to hear: Her blood count was good and her CT scan was clean.

She looked to have beaten the lymphoma first diagnosed last September.

News of a completely different kind came in a telephone call later that same week. Remains of her father, whose Air Force plane went down over Laos 49 years earlier, had been recovered and verified.

Chief Master Sgt. Edwin Everton Morgan could come home, and if she wanted, Frances Morris was invited to fly to Hawaii and accompany his flag-draped coffin to its final resting place back in Rowan County.

Sometime in June, Morris plans to do just that.

“I finally had a piece of my dad,” she says.

Morris received the emotional call Feb. 20 from Danielle Van Orden, a funeral director with the Air Force mortuary. Still at work that day in the accounts receivable department at Food Lion, Morris sent a text to her brother, Edwin “Eddie” Morgan Jr., that said only, “I need to talk to you.”

Morgan, an employee in the parts department at Gerry Wood Honda, was concerned. Had there been a mistake and his sister’s cancer was back?  “Surely, this can’t be anything bad,” Eddie says he told himself.

The siblings agreed later the word about their father — a man who will always be a mystery to them — was actually reason to celebrate his life, a soldier’s sacrifice and the repatriation of his remains.

“It’s been kind of bittersweet,” Morris says. “All of these years, I had hoped for a different outcome.”

Over almost half a century, Morris had secretly prayed for a fairytale ending — that the father she never really knew was alive, but lost, and would miraculously walk through her door someday. Knowing for sure that he is gone is a kind of closure both she and Eddie Morgan needed.

Morris was 6 years old and living in Charlotte when her father left for Vietnam Jan. 22, 1966. Just prior to his departure, he had picked up a kitten at the county animal shelter and presented it to his daughter as a gift.

She named it “Tabby.” There’s a grainy photograph of Edwin Morgan Sr. standing behind his curly haired daughter on the day he left.

“It’s one of my prized possessions,” Frances says.

At the time, Frances’ mother, Beth, was two months pregnant with Eddie Jr.

Morgan would never know he had a son. He was a load master and part of a seven-member crew on an AC-47D that left the Da Nang, South Vietnam, air base on an armed nighttime reconnaissance mission March 13, 1966.

They were flying over the Quang Nam Province near the Laotian border on what was supposed to be a three-hour mission. Weather conditions were good on a moonlit night.

Shortly after the plane’s departure, the air base lost radio contact. Search parties turned up nothing, and for the next 12 years, the crew members were listed as missing in action.

The Air Force officially changed Edwin Morgan’s status from missing to a presumptive finding of death on Jan. 9, 1978. Beth Morgan and her children, Frances and Eddie, attended a solemn service for their father at Brookhill Memorial Gardens in Rockwell Jan. 21, 1978.

The day included a four-man color guard and bugler from Pope Air Force Base. A seven-member firing line gave the traditional three volleys, representing a 21-gun salute, and Morgan’s mother and wife each received a folded American flag.

Beth Morgan erected a marker for her husband in the Rockwell cemetery. She was buried there five years later when she died of a heart attack at age 49. She had never remarried, or even dated again, her children say.

The Air Force did not stop looking for Morgan and the rest of the crew lost on the plane whose call sign was  “Spooky 73.”

For decades, news about the search for the plane trickled back to Frances and Eddie from the Air Force. Meanwhile, Morris and others still wore on occasion their POW/MIA bracelets with her father’s name on it.

In 1997, the Air Force notified Morris and Morgan that remnants of the AC 47 had been found in a remote, mountainous area of Laos, not far from the Vietnamese border. The site was about 32 kilometers east of the town of Laman.

A piece of the landing gear was the biggest thing left, Eddie recalls. Frances remembers the day she heard about the Air Force’s locating the plane because it was Feb. 9, her daughter Lisa’s birthday.

“The site was extremely overgrown at the outset of the recovery operations,” an Air Force report recently given to the family says. The report adds that the vegetation included palms, hardwood trees and dense low-lying vines and brush.

In the years to come, the siblings would receive updates from the Air Force every time excavations were done. The reports had certain things blacked out because it was still classified information at the time, but they included details on areas being explored and interviews being conducted with locals who might know or remember something about the plane’s going down.

Frances and Eddie would find out later how difficult finding any evidence of the crew and their effects was. The soil was highly acidic. A crash might have included an explosion and fire, given how much fuel the plane was carrying. No one knew what villagers in the area might have taken from the wreckage over the decades or what havoc wild animals could have caused. There apparently was a well-traveled trail near the site.

Some small bits of human remains were unearthed in 2010, and the painstaking process started in trying to verify whose remains they might possibly be. Meanwhile, the biggest excavation find came to Frances and Eddie in May 2014, when Van Doren delivered Edwin Morgan Sr.’s dog tags in person.

The tags — one for Frances, one for Edwin Jr. —  had been found in exceptionally good condition, though a bit bent. Then came Van Doren’s call Feb. 20, and she arranged to meet Frances and Eddie in person March 2 at a Mexican restaurant in Salisbury.

This Friday will mark the 49th anniversary of their father’s mission.  Frances and Eddie learned that remains belonging to Edwin Morgan Sr. and flight engineer Davis were the only ones that could be verified.

What the Air Force found of her father’s remains could fit in the palm of her hand, Frances says. The excavations had uncovered some teeth and partial bridgework which matched Morgan’s dental records, plus DNA tests also gave the government 100 percent confidence they belonged to Morgan.

“It matched perfect,” Frances says of the partial plate. “They knew without a doubt it was his.”

Edwin Morgan was 38 when he died.

Van Doren explained the Air Force would pay for one roundtrip to Hawaii to its Central Identification Laboratory at the Joint Base Pearl Harbor-Hickam, where what was found of Edwin Morgan now resides temporarily.

Frances and Eddie decided together that she should be the one flying to Hawaii in June. The whole process — from the trip out and back to a final burial for Edwin Morgan Sr. in Brookhill Memorial Gardens — will take a whole week.

At the Hickam base, Morris will be the person placing her father’s small bag of remains into the coffin, a wooden model she and Eddie selected when they met with Van Doren.

Morris already has spoken with local Patriot Guard members about providing a motorcycle escort for her father’s coffin from the Charlotte airport to Rockwell.

Eddie Morgan never met his father, of course, and Frances’ memories of him are pretty much limited to the day he left for Vietnam. Beth and Edwin Morgan had divorced when Frances was an infant, and they only remarried in the November before he left for the war zone two months later.

After both of Beth’s parents died, she and her young children moved to Rowan County to be close to Edwin’s family. Today, he has two surviving sisters in Rowan County, Lena Morgan and Wanda Leonard.

Relatives have told Frances and Eddie that their father was a quiet man, devoted to his military career and head over heels for his young daughter. Beyond that, they know little except for his time in the service.

Edwin Morgan served a stint in the Navy before joining the Air Force. He had served briefly at the end of World War II then reentered the military in 1948. His military postings included many different bases in the States, besides stops in Bermuda, Germany, France and Vietnam.

He was trained initially in personnel and worked out of the Charlotte recruiting office before going to his first combat assignment. He actually received his promotion from tech sergeant to chief master sergeant while he was classified as missing.

He has posthumously received the Purple Heart, and his name is on the wall of the Vietnam War Memorial in Washington, D.C.

Eddie Morgan says his mother rarely talked of their father and devoted herself to raising him and Frances. Questions about Edwin Sr. hardly ever came up. The pictures Frances still has of him never showed him smiling, and the children say they seldom heard anecdotes about him — maybe because he had been gone so much.

“For me, this makes me think more of my mother,” Edwin says of all that has happened in the past few weeks.

How would she have reacted? She didn’t live long enough to know her husband’s plane had been found nor that bits of him had been identified.

“She had a thing she couldn’t let go of,” Eddie Morgan says, “and she could never move forward.”

As evidence of how tight-lipped their mother could be, Frances and Eddie didn’t learn until nine years after her death that they had a half sister, Nancy Thornburg, who lived in Florida. Thornburg had been placed for adoption in 1956 when Beth Morgan had given birth out of wedlock.

Frances Morris graduated from East Rowan High School in 1977. Now 55, she has worked at the Food Lion headquarters for 23 years. She has two grown daughters,  Kim and Lisa, and three grandchildren.

Morris actually is a two-time cancer survivor, having beaten cervical cancer in 2001.

“Maybe this is my reward for what I’ve been through,” Morris says. “All I know is God’s been good to me.”

Eddie Morgan graduated from East Rowan High in 1984. Now 48, he has a son, 16, and a daughter, 1. He laughs, noting how one child is learning to drive, while the other is learning to walk.

Morgan says growing up without a father has made him “bound and determined to be the best dad I can be.”

When a burial ceremony for Edwin Morgan Sr. is conducted this June at Brookhill Memorial Gardens, it will mark 37 years between services for the airman.

Again, the military honor guard on hand will present two folded U.S. flags. This time, they will go to Frances and Eddie.

“It’s going to be a big homecoming for him,” Frances says.

And one more day of good news.