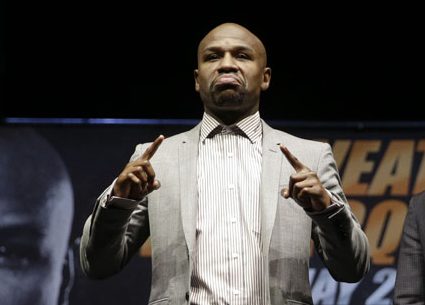 Floyd Mayweather Jr. is jumping from boxing to racing as he become a NASCAR team owner. (Associated Press file photo)

LOS ANGELES (AP) — Manny Pacquiao was out walking the red carpet by the time Floyd Mayweather Jr. arrived, fashionably late for their first appearance together to promote a fight that really needs no promoting.

But it didn’t take long Wednesday for Mayweather to put the fight into perspective in a way that only a fighter nicknamed “Money” can.

“You get to this level where you’re making nine figures in 36 minutes,” Mayweather said, “and you have to be a winner.”

Mayweather had the math right, though he declined to say just how much he will make in the May 2 fight that has stirred excitement far beyond the boxing community. He will get 60 percent of the purse in what is expected to be boxing’s richest fight ever, a haul that could exceed $120 million for Mayweather alone.

Pacquiao won’t do badly, either, in a fight that was five years in the making and will break records in another way — it will cost fans more than any other fight in history to watch both at the MGM Grand arena or in the comfort of their living rooms.

At the only press conference the fighters will do prior to the week of the fight, promoters announced that tickets would range from $1,500 in the upper reaches of the MGM Garden to $7,500 at ringside. The pay-per-view price wasn’t announced, but is expected to be in the $90-100 range.

They may have to reach deep into their pockets to afford it, but there’s little doubt that boxing fans will buy it. They want to see what Mayweather and Pacquiao say they are eager to show — the two biggest draws in boxing settling things between them once and for all in the ring.

“We don’t want to leave a question mark in the minds of fans of boxing,” said Pacquiao, from the Philippines. “It’s also very important this fight is for the honor of my country.”

If the interest in the press conference at a downtown theater was any indication, the fight is already on its way to record business. More than 700 credentials were issued for the event, and both fighters walked a red carpet lined by photographers and video cameras that was worthy of the Academy Awards.

Mayweather came late, though he could walk over from his condo next door. The pay-per-view king was businesslike and relatively subdued, with nothing bad to say about Pacquiao or anyone in his camp.

“It’s always good to have the best fight the best,” Mayweather said. “That’s what’s so intriguing about this match up.”

Mayweather said he was adamant about making the fight, pestering manager Al Haymon to get it done. But the biggest bout in recent history still may not have happened if not for a chance meeting between Mayweather and Pacquiao at a Miami Heat basketball game in January — a meeting that took place only because a big storm on the East Coast delayed Pacquiao’s flight.

Mayweather went to Pacquiao’s hotel suite afterward and the two talked and decided the fight had to be made.

“I didn’t say a lot of words because I didn’t want to say a mistake,” Pacquiao said. “He said there’s an A-side and a B-side and the purse would be 40-60. That’s enough to put me in the B-side.”

Mayweather said the fight reminded him of when he was young and Marvin Hagler and Sugar Ray Leonard fought in a huge middleweight title match in 1987. Mayweather said he wondered then how there could ever be a fight as big as that one.

Now he’s in a fight that will be bigger, if only because technology has advanced far enough to sell it to almost every home in the country.

“It’s all about timing and I think we couldn’t choose a better time,” Mayweather said. “This is a fight the world can’t miss. This is an unbelievable matchup.”

Both fighters went out of their way to be polite and respectful to each other. Mayweather also had good things to say about Pacquiao promoter Bob Arum, who he often said he would never work with again after being promoted early in his career by Arum.

About the only one not following the script was Pacquiao trainer Freddie Roach, who said his fighter will have an easier time against Mayweather than he would have if the fight was made five years ago because Mayweather’s legs are slowing and he can’t move as well as he used to.

“We have to dominate him in the first round and take him out of his comfort zone right away,” Roach said. “Our game plan is to win each round, one at a time.”

Like his fighter, Roach will earn some big money from the bout. He may need it, because Pacquiao is charging him $5 for using a certain swear word that the trainer can’t stop using.

Before the press conference began, Roach was already down $30.

“Salary reduction,” Pacquiao said, laughing as he patted Roach on the knee.