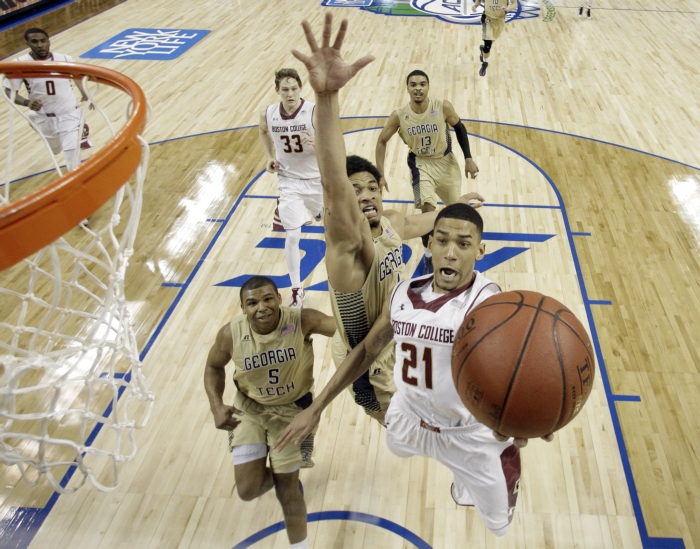 Boston College's Olivier Hanlan (21) drives to the basket past Georgia Tech's Tadric Jackson (1) during the second half of an NCAA college basketball game in the first round of the Atlantic Coast Conference tournament in Greensboro, N.C., Tuesday, March 10, 2015. Boston College won 66-65. (AP Photo/Bob Leverone)

Hanlan hit a jumper with 10.9 seconds left to help the Eagles beat the Yellow Jackets 66-65 on Tuesday in the tournament’s opening game.

Hanlan scored 25 points for the 12th-seeded Eagles (13-18), the last coming when he drove on Robert Sampson then stepped back to bury the go-ahead shot on the right side.

BC survived a strong showing from Georgia Tech on the boards and its own 36-percent shooting after halftime, advancing to face No. 19 North Carolina.

“Obviously at the end of the day, put the ball in the hands of a special player and he makes a play,” first-year BC coach Jim Christian said. “As I told the team, you don’t have to play great to advance in conference tournaments. You just have to advance.”

It was two years ago that Hanlan put on a 41-point show to set a tournament freshman scoring record in a first-round win against Georgia Tech.

Two years later in the same building, Hanlan — a first-team all-ACC performer despite playing on a team near the bottom of the league — punished the Yellow Jackets again.

“We set a double ball screen from the wing and the whole game the guard who was guarding me was staying with me, but for some reason they switched it and I had Sampson,” Hanlan said. “And I immediately recognized it and just tried to attack. I hit him with a stepback just to create space and shoot over him.”

The shot was part of a wild final minute with three lead changes and a final missed opportunity for the 13th-seeded Yellow Jackets (12-19). Corey Heyward missed in the lane on a drive, and the ball was batted wildly to the far corner and out of bounds as time expired to end it.

Only moments earlier, Georgia Tech had led by six — the biggest lead for either team after halftime — before a couple of turnovers opened the door for BC.

“Our guys competed throughout,” coach Brian Gregory said. “We just made a couple bad decisions there at the end with the ball in our hands, and unfortunately in this league against this type of competition, it’s going to come back to get you and it did today.”

Georgia Tech: Tadric Jackson scored a team-high 16 points. … Quinton Stephens went 1-for-12 from the field and missed all nine 3-point tries, scoring five points. … Sampson finished with 12 points, including a 3-pointer for the 63-57 lead with 1:51 left. … It was the Yellow Jackets’ first full game without leading scorer Marcus Georges-Hunt, who broke his right foot early in the regular-season finale against UNC.

Boston College: Patrick Heckmann scored 19 points, including three free throws with 1:10 left during the go-ahead push. … The Eagles went 12-for-15 from the foul line after halftime. … Hanlan also had eight rebounds and five assists.

In the wild finish, Hanlan scored on a runout for a 64-63 lead with 41.4 seconds left, which came after Demarco Cox threw away an offensive rebound. But Jackson answered in the lane with 26.8 seconds left, only to see Hanlan come through yet again.

Twelve of Georgia Tech’s 15 regular-season ACC losses came by seven or fewer points, and this was the fourth by a single point against league opponents. It added up to a miserable season that has left Gregory’s future uncertain.

The fourth-year coach entered with a record of 55-70 overall and a league mark of 19-51 with one ACC tournament win.