Bebop’s closing its doors Saturday; will reopen in Spencer 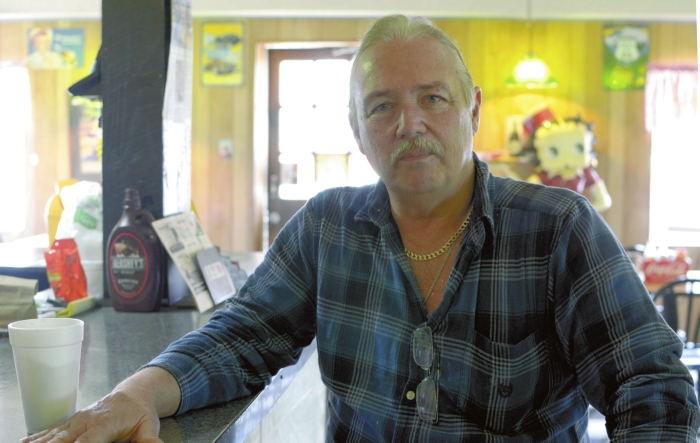 Hugh Fisher/For the Salisbury Post Wayne Bradshaw, owner of Bebop's Cruise-In, sits in the dining room after closing time Tuesday. Saturday is the diner's last day of business at its current location. The Bradshaws plan to reopen in Spencer by mid-April.

After 14 years of serving up burgers, hot dogs and more, Bebop’s Cruise-In at 5815 S. Main St. will close its doors Saturday.

Bradshaw said the move is due to the expansion of the Norfolk Southern railway line behind his family’s restaurant.

Last year, that expansion resulted in his Hot Rod Barn – an adjacent building that housed classic cars – being demolished to make way for new track.

As business wound down for the day, Bradshaw sat at the counter with a Cheerwine and a cheeseburger.

His children, Scott and Megan say the only people who hate the move more than they do are their longtime customers.

The new location in Spencer is a little over 11 miles from the current site.

The Bradshaws all live within a mile of the current site. Scott and Megan, who Wayne said “pretty much run Bebop’s” nowadays, say it’ll be inconvenient for them.

But the move also means a lot of their longtime customers can’t reach them easily.

“Some of them say it’s too far for them to drive,” Megan Bradshaw said.

Even so, Wayne said moving to Spencer was the best option, and a better choice than closing down for good.

And, up until few weeks ago, Wayne said that’s exactly what he thought would happen.

Bradshaw said construction on the Norfolk Southern line damaged the restaurant’s septic system, which he had previously attempted to locate for construction workers, but which turned out to be further out from the building.

In the weeks that followed, it became clear that moving the septic field wasn’t a cost-effective option, Bradshaw said.

Bradshaw said the railway has compensated him, and he’s keeping ownership of the land and building where Bebop’s is now.

Right now, Bradshaw plans to move his used car dealership from its current location across Webb Road and reopen it where the diner is now.

He said the larger parking lot will be good for the car business, and the increased traffic after nearby railroad crossings close won’t hurt, either.

Longtime customer Tim Miller is not happy about the move. At Bebop’s for lunch Tuesday, Miller said the entire railway expansion project is “a bad deal.”

“This is all about the government,” Miller said of the federally-backed project to create a high-speed rail corridor between Washington, D.C. and Charlotte.

Miller, who lives on Mt. Hope Church Road, is also angry about the permanent closure of the railroad crossing on his street, which has cut off residents’ access to South Main Street.

The same expansion project has led to other railroad crossing closures in Rowan County, including a multi-year closure of Klumac Road in Salisbury.

Only within the last few weeks did the Bradshaws find a restaurant space in a good location with reasonable rent, Wayne said.

Wayne said the family chose Spencer after looking at restaurant options in China Grove and Salisbury.

Those other towns have more restaurant options, while there aren’t as many in Spencer. “The odds are just better there,” Bradshaw said.

Megan Bradshaw said the new location in downtown Spencer has a bigger kitchen and an outdoor patio, which will be good for days when there are classic car events.

“We have a lot of customers in Lexington and Denton, and along the river, who’re glad to see us moving up there,” Megan said.

But the new location will require extensive remodeling and redecorating before it can open as the new Bebop’s, Wayne said.

Although the menu isn’t going to change, Scott Bradshaw said the new kitchen layout will take some getting used to.

“Of course, I was upset. I didn’t want to be relocated,” Wayne Bradshaw said. “I mean, over Christmas, I wasn’t fit for nobody.”

He said he’s feeling better, now that he knows Scott and Megan will have a chance to build the business and get new customers in Spencer.

For their last Saturday on South Main Street, the Bradshaws are planning one last treat for classic car lovers.

Anyone who comes to Bebop’s on Saturday in a classic car can buy hot dogs for 50 cents each – the price they were when the diner opened in 2001, Wayne Bradshaw said.

As for the coming move, Scott Bradshaw said, “I hope everything works out. I hope we get the business we have here.”

Wayne is more confident. “People are creatures of habit,” he said.

He’s betting that, within a month or so, the people who buy Bebop’s burgers now will take a ride up to Spencer to reconnect with their old favorite.