Baseball: Raiders rolling up the wins 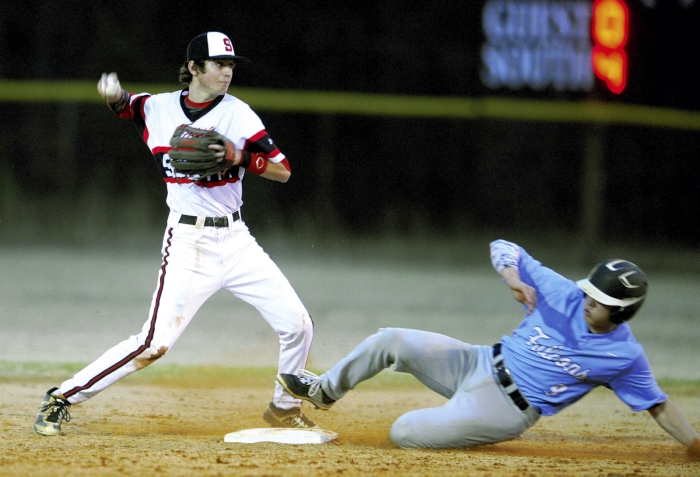 LANDIS — South Rowan’s baseball team gave the rest of the South Piedmont Conference something to worry about Tuesday night.

The Raiders used solid pitching and sound defense — the brick and mortar of all successful teams — to beat visiting West Rowan 7-1 and ascend into first place.

“It’s early,” junior shortstop Peyton Penninger warned after unbeaten South Rowan won its third league game. “But we seem to have good chemistry so far. We communicate and work together.”

South Rowan was sparked by winning pitcher Burke Fulcher, the senior right hander who bulldozed his way through five scoreless innings for his first win. He yielded four singles and a walk, faced only 17 batters and was aided by a pair of double plays in the first and second innings.

“I threw the ball low in the zone and threw strikes,” said Fulcher, who induced groundouts early and routine fly outs later. “I just let the defense make plays for me. They had my back. The double plays were huge, definite momentum boosters.”

West Rowan catcher Lee Poteat had a pair of singles against Fulcher, but watched his teammates struggle.

“He located well,” the junior said. “He kept the ball low and outside and made us hit a lot of ground balls up the middle.”

The Falcons (4-1, 1-1) threatened in the top of the first inning, collecting singles from Harrison Baucom and Jeremy Simpson. The rally fizzled when Baucom was caught trying to steal second base and Penninger initiated an inning-ending 6-4-3 double play.

Then in the second Poteat steered a one-out single to center field, only to be erased when West Rowan infielder Omar Bautista bounced into a twin-killing.

“I thought the one that Bautista hit was a tougher play,” said South Rowan coach Thad Chrismon. “It was softer-hit ball and took a really good turn by Chandler [Corriher, South Rowan’s second-baseman]. It was a beautiful double play.”

Sandwiched between those defensive gems was South Rowan’s four-run, first-inning outburst against West Rowan sophomore Austin Love. The Raiders sent 10 batters to the plate, scored two runs on wild pitches and two others on RBI-singles by Eric Stowe and Penninger.

“We had a bad first inning,” said first-year Falcons coach Seth Graham. “They’re a good team that capitalized on our mistakes. They did a lot of things right, we did a few things wrong and they took advantage of it.”

South Rowan extended its lead with three runs in the third against West Rowan reliever Brian Ketchie. First-baseman Bo Corriher pumped a two-out, two-run single into center to make it 6-0 before Hunter Travis scored on an infield error.

Fulcher, meanwhile, allowed three hits in the first two innings, yet faced only six batters. He set the Falcons down in order in the third and fourth innings before allowing Poteat’s second hit and issuing his only walk in the top of the fifth.

South Rowan right-hander Walker Joyce made his varsity debut. He allowed one hit and an unearned run in two innings of relief.

“I love where this team is right now,” Fulcher said. “We just do our best and leave it on the field.”

For previously unbeaten West Rowan, it was a loss that set off some alarms.

“It opened our eyes,” said Poteat. “It let us see that we aren’t invincible.”