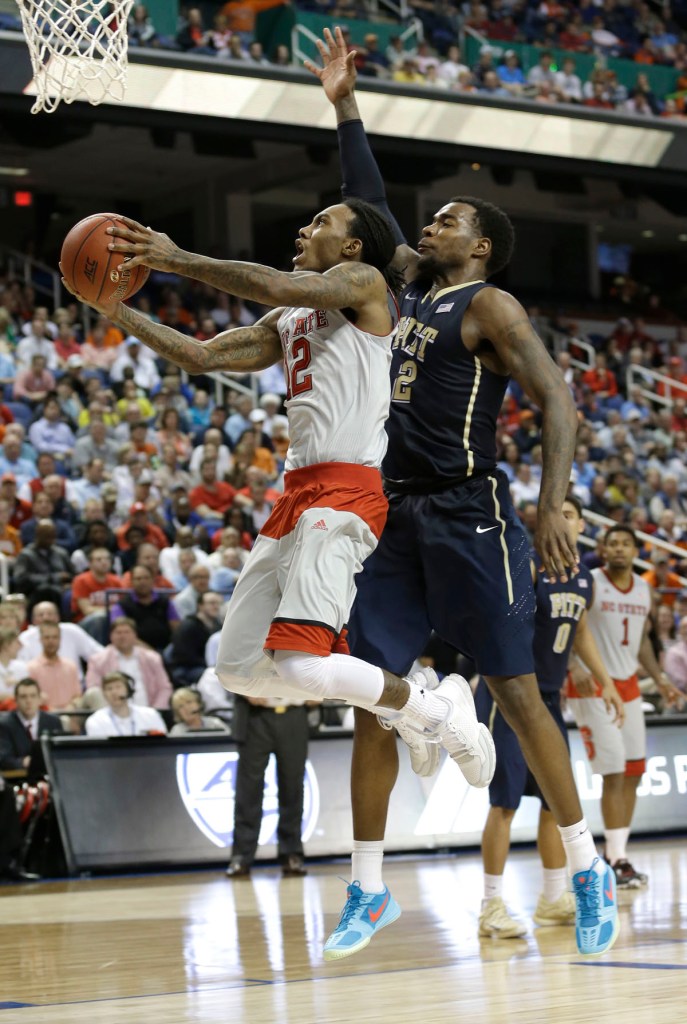 The Associated Press N.C. State's Anthony Barber (12) drives past Pittsburgh's Michael Young (2) during the second half Wednesday in the second round of the ACC Tournament at the Greensboro Coliseum.

GREENSBORO, N.C. (AP) — When Anthony “Cat” Barber is playing like this, North Carolina State is tough to beat.

The sophomore point guard scored a career-high 34 points to help the Wolfpack beat Pittsburgh 81-70 on Wednesday night in the second round of the Atlantic Coast Conference tournament.

As it has all season, the playmaking backcourt led seventh-seeded N.C. State (20-12) and caused headaches for the 10th-seeded Panthers, whether it was Barber going wherever he wanted with the ball or Trevor Lacey (21 points) knocking in tough shot after tough shot. But it’s been Barber’s improved play in recent weeks that has made the Wolfpack an even scarier matchup than before.

“I thought Cat today was just phenomenal,” coach Mark Gottfried said. “Played an unbelievable game. Trevor made big shots. Our inside guys contributed and got some baskets as well to help us. But I thought the biggest thing was Cat’s speed. I thought they had a little trouble containing him and stopping his penetration.”

Barber had 21 by halftime — just two fewer than the Panthers’ team total — and finished 9-for-13 from the field and 4-for-5 from 3-point range while making all 12 of his free throws. He had just nine points in the first meeting in January.

“I think the difference is today I was more aggressive,” Barber said. “Teammates, coaches were telling me to be me. Be me. They need me down the stretch. Today I just came out with a high sense of urgency and confidence that I could put the team on my back and that’s what I did.”

N.C. State shot 53 percent to earn its second double-digit victory this season against Pitt (19-14), a win that will only help an already-solid looking NCAA tournament resume that includes wins against Duke, Louisville and North Carolina.

Now the Wolfpack gets another shot against the No. 2 Blue Devils.

As for Pitt, whatever slim chance Jamie Dixon’s Panthers had to play their way to an NCAA tournament bid this weekend ended with a quick exit from Greensboro. They went just 8-10 in league regular-season play and entered the day ranked No. 68 in the RPI.

Pittsburgh had reached the NCAA tournament 10 times in Dixon’s first 11 seasons, but the defense that struggled all season couldn’t stop Barber or Lacey.

“It’s been hard,” Dixon said. “I mean, we’re used to being in the NCAA tournament. We play for that. But we knew what our challenges were and we didn’t get it done.”

Pittsburgh: Cameron Wright scored 19 points to lead Pitt, which shot 47 percent and went 7-for-14 from behind the arc after halftime. … Pitt finished with a 33-29 rebounding advantage.

N.C. State: Ralston Turner struggled with four points, going just 2-for-9 from the field and missing all five of his 3-pointers. … Lennard Freeman finished with nine points. … N.C. State had five turnovers.

Barber averaged 15.8 points over the last nine regular-season games and shot 48 percent from 3-point range in that stretch. His 34 points were the most by an N.C. State player in the ACC tournament since David Thompson scored 38 in the 1975 quarterfinals against Virginia.

With Barber rolling, the Wolfpack attacked late instead of stalling.

Pitt made its best push to get within eight with about 2½ minutes left, only to see Barber drive and hit a hanging layup while drawing a foul for a three-point play. He then drove again to set up Freeman for a layup and another three-point play, then added one more blow-by layup that made it 78-64 with 1:07 left.

“We’re not going to go in and make crazy plays, but we’re going to take advantage of the opportunities we do have,” Lacey said, “and that’s what we did.”