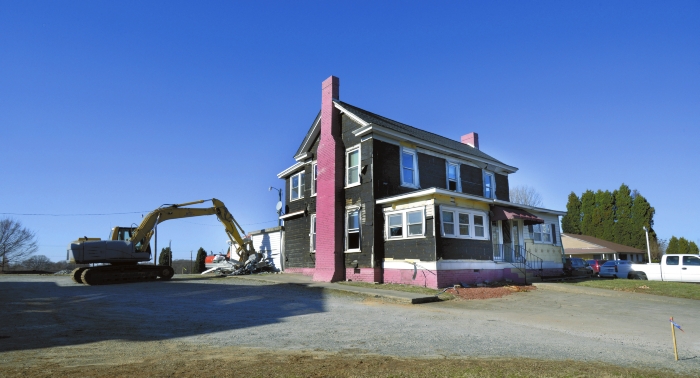 Clearing the lot where the new Rowan Salisbury Schools office will be constructed on N. Main Street has begun. Heavy equipment is on the lot. This house was the surveyor's office and Richard's Barbeque is on the right. The siding has been striped from the house. photo by Wayne Hinshaw, for the Salsisbury Post

At long last, work has begun on the site of the Rowan-Salisbury School System’s future central office.

“I’m pleased with the way things have started,” Assistant Superintendent of Operations Anthony Vann said Monday. However, he added, “We’ve got a long way to go.”

The entrance is located on the Cemetery Street side of the property and is made of large rocks in order to remove the mud and dirt from the construction vehicles’ tires as they exit the property.

The silt fence is a low fence around the perimeter of the site with a black fiber material to keep the dirt from washing away during heavy rain.

“It keeps it on our property,” Vann said.

“That house is on the ground now,” Vann said, adding that crews are working to remove the pieces from the site.

Crews are treating one of the other structures on the site for asbestos before demolishing it, as well.

Vann estimates it will take a week before that building is ready for demolition.

“As soon as all three structures are demolished and the site is cleaned up, we will start the earthwork,” he added.

Toward the end of next week, crews should be able to begin the earthwork on the site, which includes cutting, filling and shaving the site to make it level or balance it out.

The groundbreaking is scheduled for April 18 at 4 p.m. and will be open to the public.