Shrimp — a versatile delicacy of the South 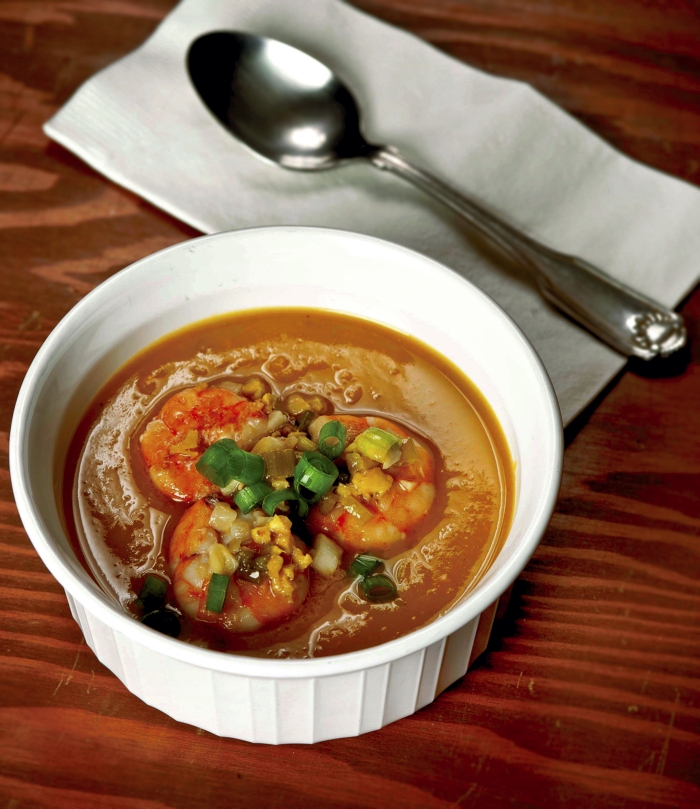 There are three new cookbooks in the Savor the South series, “Shrimp,” “Catfish” and “Gumbo.”

These plain little books, with about 50 recipes each, are part of a series published by the University of North Carolina Press, covering ingredients that define Southern cooking. There are now 13 books in the series, ranging from buttermilk to okra.

Each book is written by a chef or food lover who has a love for the South and its ways.

It’s hard to imagine a trip to the beach without a plateful of fried shrimp. Once upon a time, a shrimp cocktail, a combination of cooked shrimp and spicy sauce, was the signature of fine dining.

Well, things have changed. The shrimp cocktail got old and people started wanting more fresh, unusual flavors in their food.

Shrimp is, in many ways, like chicken. You can pair almost anything with it. You can fry it, roast it, stick it on a skewer, add it to a salad, toss it into soup, stuff it into tacos or serve it with grits.

Shrimp likes spice, it likes citrus, it pairs with pasta or rice.

Author Jay Pierce grew up shrimp fishing with his father. The family caught shrimp, hoping for enough to fill the freezer for several months.

He recalls, “In the boat, my dad would attempt to aim the boat where the shrimp might be, cutting the wheel back and forth so we would proceed in serpentine pattern. We would always hope to find a ‘jubilee,’ which is when the shrimp are at the surface of the water, feeding and splashing and just asking to be caught.”

He explains that a shrimp’s fat is in its head, cooking whole shrimp produces a more flavorful dish. On the other hand, that fat can spoil quickly, so if you’re going to freeze it, it’s best to take the heads off.

Native Americans and early inhabitants of North Carolina ate shrimp because they needed a source of protein. Later Americans viewed shrimp as a pest, plowing them into the soil as fertilizer (never heard that before).

Shrimp, Pierce says, went from being a mainly coastal treat to the most popular thing to come out of the sea. And he is a big advocate of wild caught shrimp, not the farmed shrimp, which have a different flavor. He urges diners to buy American.

As for keeping that shrimp, his preferred method is to freeze the shrimp in a block of ice, which he says protects the shrimp better than a simple plastic bag. It also requires about 24 hours for thawing. He prefers unpeeled shrimp for freezing.

Confused about size? Pierce offers a guideline: U15 means there are less than 15 shrimp in a pound. The higher the number, the more shrimp per pound, and the smaller the shrimp will be. So if you want medium shrimp, look for 31/40 or 41/50 shrimp per pound. Small shrimp, the ones often fried, would be 61/70 or 71/90. He says the smaller shrimp are a little bit sweeter. Don’t keep frozen shrimp longer than six months, as they’ll lose flavor and texture.

What would you like to drink with that? Pierce thinks beer is ideal, because it comes in so many varieties, just like shrimp dishes. But a margarita is best with shrimp tacos or enchiladas.

Pierce is executive chef at ROCKSALT in Charlotte and has written for CNN’s Eatocracy blog, Edible Piedmont, Savor NC and Beer Connoisseur.

Here are a couple recipes, one we tried and the other released by UNC Press.

“My mother’s grandmother was the benchmark cook in our family; everyone still compares their cooking to hers. Esma Richoux was born in LaRose, Louisiana, where she was head of the household by the age of sixteen. After relocating to the suburbs of New Orleans with her husband Norba Trosclair, she hosted all of our family’s memorable meals. She was allergic to shrimp, so this is based on her chicken stew recipe. My mother, Collette Boudreaux, loves shrimp, so she omitted the lima beans and chicken and added shrimp. My mother’s rendition of this dish is what ignited the passion for food that burns in me today.”

Combine the oil and flour in a cast-iron skillet over medium heat. Stir, slowly and constantly, until the roux is the color of chocolate, 20-30 minutes. Add the onion, celery, garlic, and bell pepper, mix well, and remove from the heat.

When the vegetables stop sizzling and producing steam, transfer the mixture to a Dutch oven or similar-sized heavy-bottomed pot. Gradually add the chicken stock (you may add water as needed — the stew should be thinner now than you want the end result to be).

Add the salt, pepper, thyme, bay leaves and Creole seasoning. Bring to a boil, then reduce the heat to medium-low. Add the shrimp and simmer for 15-20 minutes. Remove the bay leaves and add the parsley in the last few minutes. Serve over rice.

Pierce got the recipe for this soup using two North Carolina ingredients from his friend, Elizabeth Wiegand, “my go-to source for all matters related to the Outer Banks of North Carolina.”

Makes 6 servings as an appetizer or 4 for lunch

• About 2 pounds sweet potatoes, peeled and chopped into cubes

• About 4 cups vegetable or chicken stock

To make the soup, in a large pot, heat the olive oil over medium-low heat. Add the onion and stir occasionally, until soft and translucent, about 5 minutes. Add the garlic and ginger and stir to coat. Add the sweet potatoes, stir, and pour in just enough vegetable or chicken stock to cover the veggies. Add the salt and pepper and stir. Bring to a simmer and cook over low heat until the sweet potatoes are fork-tender, about 30 minutes. Add more stock, if necessary, to keep the veggies covered as they cook. Puree the soup with an immersion blender until no chunks remain. Keep warm.

To make the shrimp, in a small saute pan, heat the olive oil over medium heat. Add the shrimp and stir for 2-3 minutes until the shrimp are pink and cooked through. Add the ginger, garlic, and chives, stirring to combine. Remove from the heat and sprinkle with the lemon juice. To serve, ladle the soup into serving bowls, then divide the shrimp evenly and place them in the center of each serving.