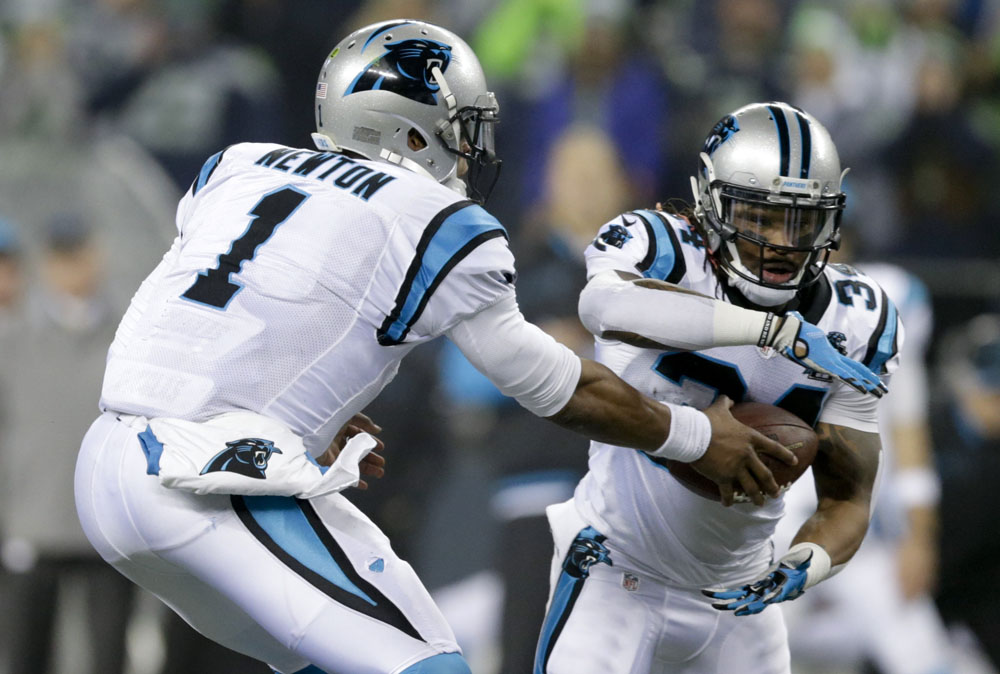 The Associated Press Carolina quarterback Cam Newton, left, hands off to running back DeAngelo Williams on Jan. 10 during the first half of a divisional playoff football game in Seattle. In a move that was already made public, the Panthers' release of Williams became official Tuesday. Carolina designated Williams as a post-June 1 cut and will save $2 million in salary cap money.

CHARLOTTE, N.C. (AP) — The Panthers spent the first day of free agency making sure their own players didn’t leave town — with one notable exception.

Agent Marc Lillibridge said tight end Ed Dickson has agreed to terms on a three-year contract with Carolina. Dickson is expected to sign the contract on Wednesday upon passing his physical. The team also re-signed defensive tackle Dwan Edwards to a two-year deal.

Carolina tagged Williams Tuesday as a post-June 1 designation, which allows them to save money under this year’s salary cap by pushing a portion of Williams’ prorated signing bonus into 2016.

“DeAngelo will forever be remembered as one of the quintessential Panthers of this era,” Rivera said in a press release Tuesday.

Williams ran for 6,846 yards and 46 touchdowns in Carolina, but his production slipped in recent years. Injuries kept him out of 10 games last season and he ran for just 219 yards.

Dickson played in 16 games last season for the Panthers and caught 10 passes for 115 yards and one touchdown. He serves as the team’s second tight end behind Olsen, but was more active in the passing game late in the season.

Dickson’s best season came in 2011 with the Baltimore Ravens when he caught 54 passes for 528 yards and five touchdowns.

By re-signing Edwards, the Panthers assured their interior defensive line will remain intact this year.

An 11-year NFL veteran, Edwards played in all 16 games in 2014 totaling 39 tackles, four sacks and one interception.

Edwards says in a release he wanted to finish what he started, saying “I got here three years ago and the defense has been improving, we’ve made a couple playoff appearances and I want to see it through.”

The 6-foot-3, 305-pound Edwards joined the Panthers in 2012 and helped them become one of three teams to field a top 10 NFL defense in each of the last three seasons.

“Dwan has been very productive as a part of the defensive tackle rotation with Star Lotulelei, Kawann Short and Colin Cole,” Rivera said. “I really appreciate the senior leadership he brings to the defensive line room and I’m excited to have him back on our team.”

As expected, the Panthers did not re-signed defensive end Greg Hardy before the free agency signing period opened. Hardy can sign with any NFL team even though he remains on the commissioner’s exempt list and is still subject to suspension.