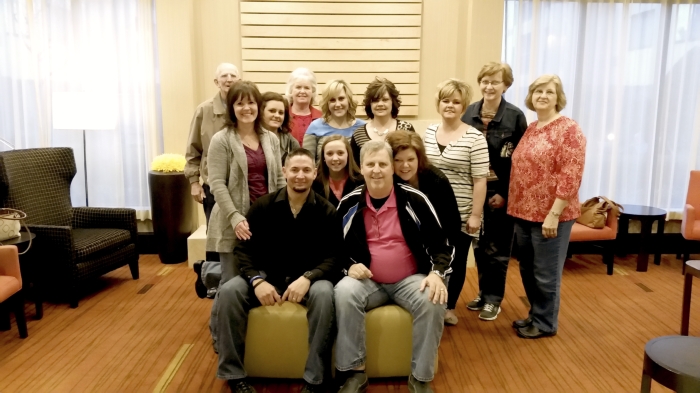 Supporters of the Rev. Tim B. Jones, left, and Don Herbert gathered behind the two men Sunday night in Durham before their kidney transplant operations Monday at Duke University Medical Center.

From his hospital bed at Duke University Medical Center, the Rev. Tim B. Jones said the surgeries Monday in which he donated one of his kidneys to friend Don Herbert were a success.

Jones said his own operation took six hours — about twice as long as expected — because “they found an aneurysm in one of my arteries.”

“God used the story to save both our lives,” Jones said. “If I hadn’t listened to God’s voice to give my kidney, I might not have been here much longer if it ruptured.”

Because of the transplant operation, Jones is on leave from his job as a surgical technologist in the operating room at Carolinas Medical Center-NorthEast. He also is pastor of Mercy Independent Baptist Church, a small church in Kannapolis. It was during a Saturday craft and bake last fall at the church that Jones and Herbert first met.

Not long after that meeting, Jones learned through social media that Herbert had stage 4 kidney disease and needed a new kidney to avoid spending the rest of his life on dialysis.

He decided to offer one of his kidneys, proved to be a good match, and the men and their families have become close friends since then. Herbert is a gospel singer with The Parables of Christ, and he also is the former professional wrestler John Savage.

Recovery for both men is expected to take six to eight weeks.

Herbert had a successful heart catheterization last Wednesday, which gave a green light to Monday’s transplant.