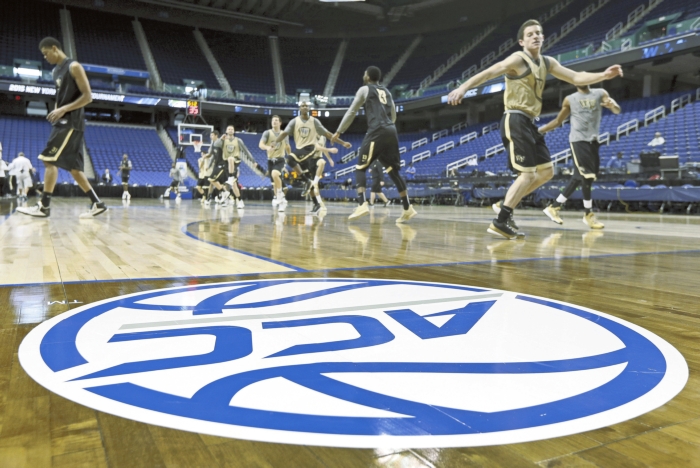 For the second straight year, it’s Virginia — not traditional powers Duke or North Carolina — entering the Atlantic Coast Conference tournament aiming to follow a regular-season title with another championship.

The No. 3 Cavaliers (28-2, 16-2) became the first league team from outside the state of North Carolina to win the regular-season race outright in consecutive years. Now they can be the first to win two straight ACC tournaments, too.

Coach Tony Bennett said Monday that a weekend loss at Louisville highlighted “a few little holes” for his team to fix to play its best.

“We’ve got to be as ready as we can but I also know our guys understand that,” Bennett said. “That Louisville game certainly showed that. … I think we understand it clearly now. Now we have to do something about it.”

The Cavaliers are waiting for starting guard Justin Anderson to return from a broken finger that has sidelined him for several weeks, followed by an appendectomy last week. Bennett said Anderson would be evaluated by a doctor Tuesday and said he wants to see him practice fully before his return.

“I’m hopeful he’s going to play if not the ACC tournament then the NCAA tournament,” Bennett said.

The tournament starts Tuesday in Greensboro, North Carolina, with the lowest-seeded teams. Virginia doesn’t play until Thursday’s quarterfinals along with No. 2 Duke, No. 11 Notre Dame and No. 14 Louisville.

The second-seeded Blue Devils (28-3, 15-3) enter with momentum and 11 straight wins. They’re a bit thin with eight scholarship players, but — like the Cavaliers — they figure closing the year on the road in a tough environment was preparation for March.

“It’s great to have confidence from all eight of your guys going into the postseason, going into tournament play,” Duke junior Amile Jefferson said after Saturday’s win at rival North Carolina. “Because to be honest, this was like a tournament kind of game, a regional final or something like that.”

Some things to watch at this week’s ACC tournament at the Greensboro Coliseum:

Last year, Notre Dame’s frustrating ACC debut season ended with a one-game stay in Greensboro. This time the third-seeded Fighting Irish have been one of the league’s best all year behind all-ACC guard Jerian Grant and an offense shooting 51 percent to rank second nationally. “I’m really thrilled with how we’re playing offensively as we head to Greensboro,” coach Mike Brey said after Saturday’s win against Clemson. “I think we’re at a really high level there.”

Fourth-seeded Louisville makes its tournament debut after reaching one of coach Rick Pitino’s goals by earning a double-round bye with the Virginia win. “We could possibly play North Carolina, Virginia and Duke if we were to be successful and get to the finals,” Pitino said Monday. “That, in itself, really, really has got me very excited because that’s about as good as it gets.”

North Carolina’s Marcus Paige was a preseason pick as league player of the year and an all-American, but had a tough season that included a foot injury that often had him playing through pain. But Paige says he’s healthier now and proved it by scoring 23 points in Saturday’s loss to Duke. If he can keep rolling in the tournament, the fifth-seeded and 19th-ranked Tar Heels have the chance to stick around a while.

Louisville’s arrival isn’t the only change. This year’s five-day event shifts forward one day to close with a Saturday night finale — a departure from the traditional Sunday afternoon finish. And Syracuse is sitting out after self-imposing a one-year postseason ban for NCAA violations, eliminating one opening-round game Tuesday.

Virginia, Duke, Notre Dame, Louisville and North Carolina are locks for the NCAA tournament, while seventh-seeded North Carolina State looks solid. But Miami and Pittsburgh need a good showing to have much of a chance. The sixth-seeded Hurricanes (20-11, 10-8) have a win at Duke and sits at No. 63 in Monday’s RPI rankings — though they won at Pitt last week. The 10th-seeded Panthers (19-13, 8-10) sit at No. 68.