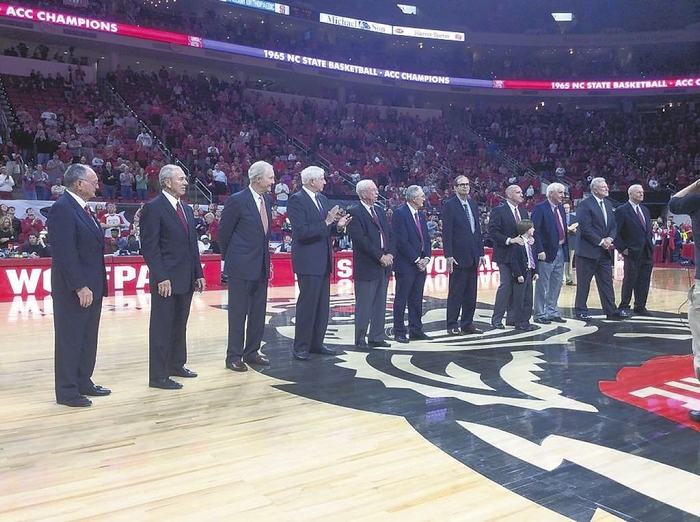 submitted photo Salisbury resident Sam Gealy (fifth from left) enjoys the moment on Saturday afternoon in Raleigh, as the 1965 ACC championship N.C. State basketball team was recognized. Gealy was a member of that team which, 50 years ago, went 21-5 and defeated Duke in the tournament title game.

Case, an Indiana native who took charge of the Wolfpack before the 1947 season, was more responsible for the rise of southern basketball than anyone. He was a born promoter and brought to the South, rituals commonplace in Indiana, a hotbed of hoops. Things such as pre-game player, introductions with spotlights and cutting down nets to celebrate championships. He pushed for the completion of Reynolds Coliseum, and at the time, it was the largest on-campus basketball arena in the country.

Before Case, basketball merely helped kill time for North Carolina sports fans between football and baseball seasons. But Case started winning in his new facility in Raleigh — and winning a lot. The Wolfpack placed third nationally in 1950, and neighbors North Carolina and Duke were envious. North Carolina brought in coach Frank McGuire to beat Case. Duke hired Vic Bubas, who had learned under Case. It all escalated from there.

By the 1965 season, Case was 64, worn out, plagued by headaches and weakened by cancer. Gealy was a junior on that team. Two games into the Wolfpack’s season, Case stepped down, and assistant Press Maravich, best known now as Pete’s father, but a red-towel-chewing character in his own right, replaced the legend.

“We did a few more sophisticated things on offense with Press,” Gealy said. “But the biggest change was that we started pressing full-court. That created opportunities to score easily.”

The Wolfpack won 11 straight games. Fifty years later, Gealy recalls the euphoria of going on the road and beating Duke and Billy Cunningham-led North Carolina, on their home floors.

“I came off the bench as one of the two guards and my role depended on the situation,” Gealy said. “If I did something good, then I got a chance to play more.”

N.C. State finished in a three-way tie for second in the ACC with a 10-4 record. Duke won at Reynolds to break the Pack’s long winning streak, and the Blue Devils won the league with an 11-3 mark.

“Duke had an extremely talented group with Bob Verga, Jack Marin and Steve Vacendak,” Gealy said. “Verga was one of the best shooters I ever played against.”

The Wolfpack got the No. 2 seed for the ACC tournament in a draw and had the advantage of playing the tournament on its home floor. The tournament was  life-and-death in those days for hoops fans, as only the tournament champion would represent the ACC in the NCAA Tournament. Everyone else went home.

“It was a different kind of pressure than teams play with now,” Gealy said.

Gealy played 24 minutes and scored four points in the first round of the tournament, as the Wolfpack wiped out Virginia, 106-69. He remembers the 76-67 semifinal win against Maryland, mostly because the Wolfpack went 22-for-22 from the free-throw line.

“For a team to be able to shoot 22-for-22 in that kind of atmosphere was pretty amazing,” Gealy said.

The 1965 ACC Tournament championship game with sixth-ranked Duke is legendary, and the Wolfpack’s 91-85 victory is  still remembered. It was a full-court fight with both teams pressing furiously. When Moffitt got in foul trouble, Larry Worsley bounced off the N.C. State bench, shot 14-for-19 and scored 30 points.

Gealy played five minutes in that game. He didn’t score, but he had an assist.

“Worsley had a tremendous game,” Gealy said. “Duke kept leaving him open, especially from the corners, and  he just kept hitting. And while they were 2s then, a lot his shots would have been beyond the current 3-point line.”

There was even more emotion after the game. Case had been too ill to attend the semifinals, but he was on press row at the championship game in a wheelchair.

“He’d recruited us and was the reason we were at N.C. State,” Gealy said. “All of us picked him up, so he could cut down the last strand of the net.”

That was the last public appearance for Case, who would die in the spring of 1966. It was fitting that his last act with the Wolfpack was cutting down a net – a practice he had brought to the South.

The Wolfpack lost in the first round of the NCAAs — brought down by an amazing Princeton player named Bill Bradley — but they won their consolation game against St. Joseph’s.

“You didn’t play as many games then, so winning 20 really meant something,” Gealy said.

That team hasn’t been forgotten. Lakins and Moffitt have passed away, and one team member couldn’t make it, but nine of the 12 players were honored in ceremonies in Raleigh on Saturday when the Wolfpack walloped Syracuse.

“Fifty years go by fast, and some of the guys I hadn’t seen in 25 or 30 years, so it was a nice reunion,” Gealy said. “The crowd was great.  It was really special for a bunch of old guys to be acknowledged and appreciated.”

Mattocks is a supervisor of officials.  Biedenbach has enjoyed a long college coaching career.

Gealy said he’s the only member of the 1965 Wolfpack who went into high school coaching for any length of time.

Between the men’s and women’s golf  teams, Gealy has been named South Atlantic Conference Coach of the Year five times.