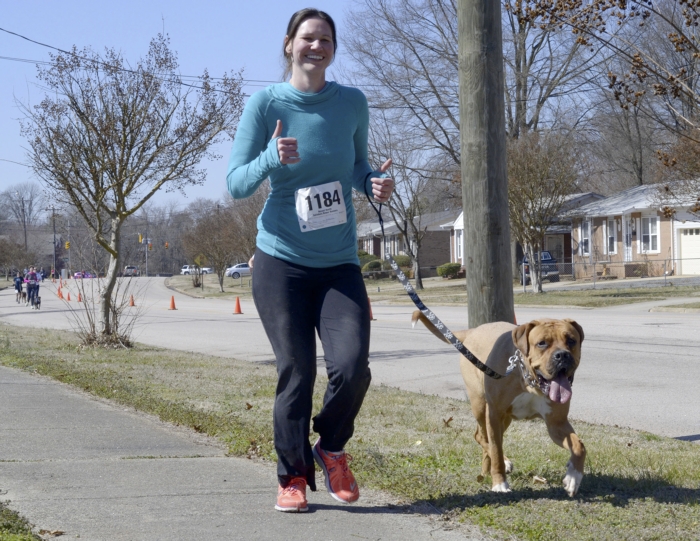 Hugh Fisher/For the Salisbury Post Kat Tate and her dog, Cabrini, jog in the Fur Fun 5K, held Saturday in Salisbury. The race was put on by Salisbury Parks & Recreation and Dog PAWS to raise money for a proposed dog park at the Salisbury Civic Center.

SALISBURY — All told, there were probably close to 90 racers at the starting line of the Fur Fun 5K.

About a third of them were on leashes.

That’s because Saturday’s race – which featured about 64 human entrants, according to organizers – was open to canine competitors.

In fact, only dogs could win prizes for being the top three finishers.

Organized by Salisbury Parks and Recreation and the Dog PAWS Taskforce, the 5K was a fundraiser for a new dog park adjacent to the Salisbury Civic Center, where the event was held.

Theresa Pitner, director of Dog PAWS, said it’ll take about $45,000 to complete the dog park. Their initial goal of $10,000 will jump-start the project with the installation of a fence.

The “PAWS” in Dog PAWS stands for “Parks and Walks in Salisbury,” Pitner said.

“This is great,” Pitner said of the turnout. In addition to runners and dogs, numerous friends and family members turned out to cheer them on.

The race had originally been planned for Feb. 28, but was postponed due to the prior week’s snowfall.

Saturday’s inaugural event took place at the Salisbury Civic Center under blue skies and what runners described as perfect weather: sunny and not too warm.

“Hopefully, we will get some money to get this dog park up so she can run around every day,” said Kat Tate, of Salisbury. She brought Cabrini, a Mastiff mix, to jog with her in the race.

“I think it’s a great way to bring folks together,” Tate said.

Aprille Bell and Bryan Crews came out to run with Cooper, a black Labrador.

She said the 5K seemed like a great opportunity. “There’s lots of dogs out here, and (Cooper) likes to be around other dogs,” Bell said. “And it’s the first warm Saturday, warm enough to run.”

“Look around you. There are hundreds of people that have dogs, and nowhere to take them that’s safe,” Rebhan said.

“I think (the dog park) will be a real draw for our community,” Rebhan said. “This is a good thing.”

Dog PAWS organizers say a dog park on the city’s one-acre lot is ideal because it already has utility service and is centrally located.

The Salisbury Parks and Recreation master plan, approved by the city council in 2012, calls for creating a dog park.

“We’re trying to build a dog park not only for pet socialization, but pet owner socialization,” said Vivian Koontz, of Salisbury Parks and Recreation.

“It’ll be a place for dogs to play safely, and give their owners some downtime,” Koontz said.

The 5K course started and finished at the Civic Center on Martin Luther King, Jr. Avenue, with several laps around neighborhood streets.

While volunteers handed cups of water to humans on the course, dogs gathered around several water bowls nearby for a mid-race pit stop.

Nearby, some friends of race participant Ritchie Hearne, of Albemarle, stood ready to cheer him on.

And they also cheered for Zoey, the Hearnes’ four-year-old Sheltie mix, who was running with him.

They finished fourth overall, and Carol Hearne said Zoey was the first dog of her size to finish.

“I love the connection between the owners and the dogs,” Carol Hearne said.

The Hearnes said they’re involved with a group that wants to build a dog park in Albemarle, and they hope to learn from the experience of Dog PAWS and Salisbury Parks and Recreation.

More events are planned for later this year to raise funds for the planned dog park.

Koontz said these events help bring about “a sense of community pride, especially when you do something for a cause.”