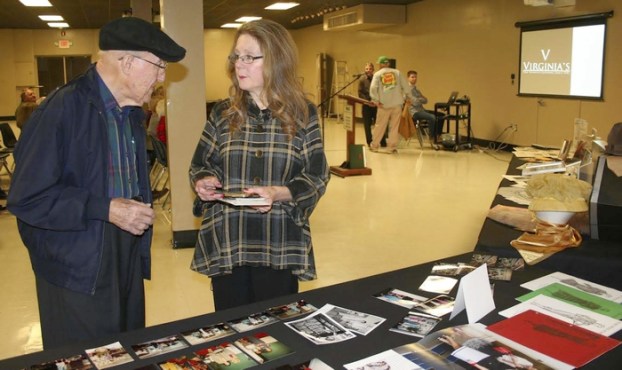 Becky Hoyser still has the outfit she wore on her first date with her husband in 1980. It was a red v-neck sweater with tartan skirt. It came from Virginia’s.

“I was just taken with it,” Hoyser says, wistfully.

For generations, women in Rowan and Cabarrus counties have known the place to go to find timeless, classic fashions.

For 73 years, Virginia’s has been a mainstay of Downtown Kannapolis. Melanie Davis Keziah represents the shop’s third generation of ownership, and spoke March 2 about the store’s long history to about 50 people at the Kannapolis History Associates meeting.

In 1942, Keziah’s grandmother, Bea Davis, opened Virginia’s on Main Street with Lucy Deese, a silent partner. The store was named for Deese’s daughter.

During World War II, Davis was a buyer with Belk department store, traveling by train to New York City to purchase hard-to-find nylons and other items.

Davis’ daughter, Jane Davis Miller, helped her mother in the shop over the years, while Davis’ husband, Ed, babysat the grandchildren. Ed Davis also made all of the lovely casements and dressing rooms that traveled over the years to the shop’s two other locations.

“He’d say, ‘Now Bea, just draw it out like you want it, and I’ll make it for you,’” Keziah recalled Monday.

Keziah started working in the store during high school, working with the Kannapolis Merchants’ Association and soliciting donations for the annual Christmas parade and other downtown activities.

When David Murdock purchased the downtown area and created Cannon Village, the store moved once again from West Avenue to West A Street, its current location.

“We moved all of my grandfather’s furniture and all the counters,” Keziah said. She didn’t want to move, she said, but Murdock’s company did take care of the moving expenses.

At first, she was concerned about outlet stores in the downtown area.

“We strived to be first-quality,” she said, “and customers sought us out.”

Keziah and her grandmother worked together for years. Their last trip to the Atlanta market was when Davis was 91.

Davis made the decision to move to an assisted-living facility, Keziah said. “She felt she was going to the country club, because she knew everybody there. She loved it.”

Keziah added, “We set out each day to be the best we can be. I was taught by a fine businesswoman.”

Brenda Trott began working at the shop in 1959, at age 15. She folded sweaters and sized dresses and remembered Davis fondly.

“She was the sweetest thing to me,” she said. “She was a dear, dear friend.”

Davis even purchased Trott’s wedding dress on a trip to New York.

“She knew my size, and she brought my dress back,” Trott said. “She spent just what I had given her.”

Trott added that she always suspected Davis might have added some of her own money to the purchase, however.

“Virginia’s was a big part of my life,” Trott said.

For the past eight years, Rebecca Measmer has been Keziah’s “right-hand lady.”

“She and I begin each day with prayer, and we ask the Lord to bless our shop,” Keziah said. “Hopefully the downtown will improve and continue to thrive in this slowly improving economy.”

Keziah told the group, “Come and see us and you will be our answer to prayer.”

Being the savvy businesswoman her grandmother taught her to be, Keziah gave each attendee a coupon.

By Hugh Fisher hugh.fisher@salisburypost.com SALISBURY — All told, there were probably close to 90 racers at the starting... read more