‘Something very special’ about Baylie Hain 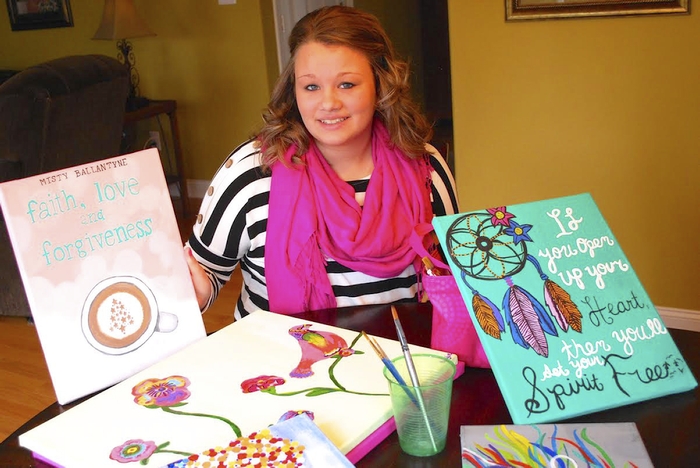 America’s rising adults – also known as the millennial generation – have been labeled in a number of ways. They are confident and connected. On the flip side, some surveys suggest that America’s millennials feel entitled, and presume to deserve privileges such as desirable jobs and promotions.

Confident and savvy, 18-year-old Baylie Hain embodies many of her generation’s strengths. With several jobs and small online businesses, big dreams, and a sensitivity to others heightened by the medical struggles of her older sister, Baylie is productive and independent. She is a dreamer and a doer.

As for the millennial entitlement? If it’s in fact a real thing, this hard-working high-schooler has broken the mold.

“She’s just a go-getter,” said Baylie’s father, Jeff Hain. “She has to be doing something productive: work, painting, college applications. She’s always up to something.”

Baylie spends three nights a week teaching and taking dance at Steppin’ Out Dance Company in Spencer. She has several online businesses including the Origami Owl and Keep Collective jewelry lines, as well as her self-made online business “Bay’s Paint Shop” where Baylie sells custom paintings to order and conducts painting birthday parties for children.

On top of it all, she’s a straight-A student at West Rowan High School.

“She’s teaching dance, she’s babysitting. I don’t know how she does what she does – and with a little happy smile on her face,” said Baylie’s mother, Kelly Hain.

Even as a young child, Baylie –  the middle sibling of three girls – was extremely strong-willed, Kelly says. Baylie overcame leukemia when she was 5 years old, and has always preferred to do things for herself.

“I’m very independent. I don’t like for my parents to pay for all of my things,” said Baylie, who saved enough money to buy a car – a black Nissan Altima –  one year ago.

In February of 2010, when Baylie’s older sister, Emily, was diagnosed with a Chiari malformation and Ehlers-Danlos syndrome, Baylie’s independence was put to the test. Emily’s conditions have required ongoing treatment and surgeries, most of them in the state of Maryland where Emily sees Dr. Fraser Henderson, a specialist in both of her conditions.

This leaves Baylie, her younger sister, Lily, 14, and Jeff at home for long stretches while Kelly and Emily, 20, are in Maryland. Most recently, Kelly and Emily have been in Maryland since Jan. 5, during which time Emily has undergone several surgeries.

“Lily, Dad and I have spent a lot of time by ourselves,” said Baylie. “It’s hard to get us all together.”

There are days when the sadness and frustration that Baylie feels for her older sister are overwhelming, she says. But Baylie has learned how to stay focused and find the positives in her family’s situation. Emily’s health issues have made their family closer and stronger, Baylie says.

“We’ve met amazing people through Emily’s struggles, and learned that we can do things we never thought we could do,” said Baylie.

Some of Baylie’s unexpected accomplishments include learning how to grocery shop, cook, and help manage a household at the young age of 18. And with Jeff’s work in sales requiring him to travel regularly, there are times when Baylie truly is running the house.

“These are some life skills she’s learning,” said Jeff. “She cooked a pork chop meal the other night. It was good, too.”

Emily’s medical issues have heightened Baylie’s sensitivity to others.

“It’s made me more understanding and patient,” said Baylie. “Everyone has issues, some more than others.”

Baylie will begin as a freshman in Catawba College’s business program in the fall, and plans to continue teaching dance at Steppin’ Out throughout her college career. Upon graduation, Baylie aims to channel her patience, business skills, and her passion for dance by opening a dance studio for special education children – a business model unlike anything that exists in the region.

It was the experience of volunteering through her high school at several Special Olympics tournaments that opened her eyes to the joy of working with special needs kids, Baylie says.

“Baylie just inherently has the ‘teacher gene’ and is so natural with children,” said Jennifer Perrell, special education teacher and co-owner of Steppin’ Out Dance Company.

“She will be a blessing to any student that she interacts with, but especially those with special needs.”

Baylie sees the multiple online businesses she currently runs as great practice for running a future dance studio. Key lessons that she has learned so far include the honing of her people skills, discerning “how to pick and choose your battles,” and understanding the basics of managing a business, Baylie says.

“It’s the best way to get the word out – that, and word of mouth,” Baylie said.

So far, Bay’s Paint Shop has sold about 30 paintings, most of them priced around $30. Baylie’s first commercial client was a dental office, for whom she painted their logo on a large canvas.

As for the future dance studio for special needs children, Baylie’s mother, Kelly, has learned to take Baylie – and her aspirations – very seriously.

“Baylie is one of those people, when she’s committed to something she is going to make sure it happens,” Kelly said.

In the process of pursuing her dreams, this hard-working millennial has made many people – her parents, teachers, fellow church members, and dance studio employers, to name a few – extremely proud.

“I’m thrilled that others see in Baylie what I see in her,” said Kelly. “There is something very special about that child.”