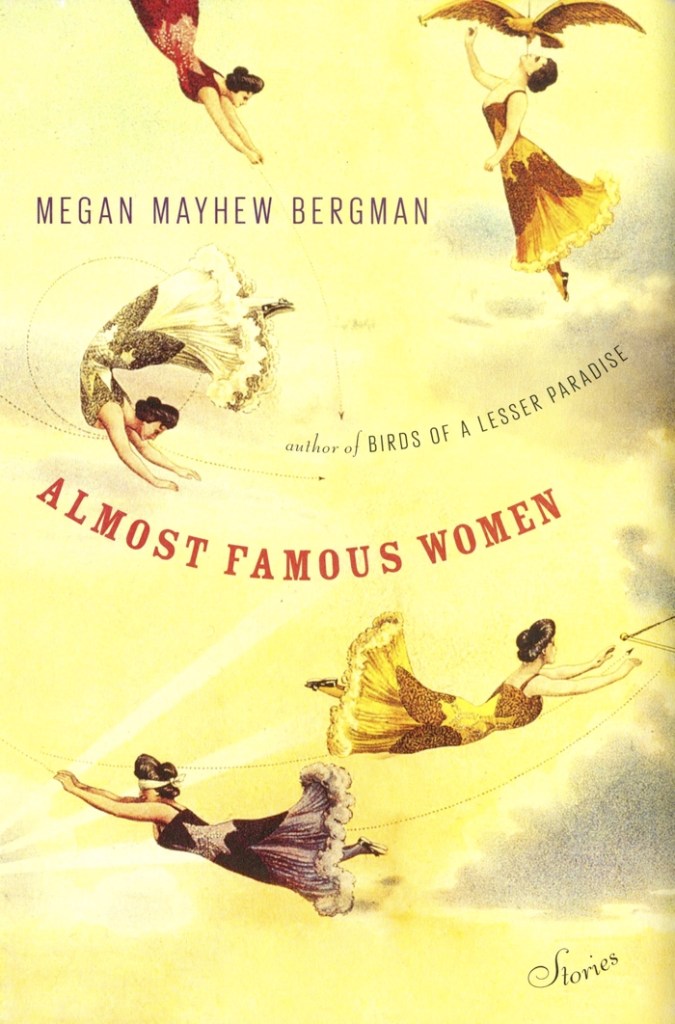 In Megan Mayhew Bergman’s collection of short stories, “Almost Famous Women,” you will find darkness, sadness, loss. Yet each story is beautifully made. Her storytelling is intimate and very personal.

All the subjects were real women, many of them famous, once, some, not so. Bergman uses facts she’s gleaned through extensive reading and research. Then she imagines situations and conversations based on what she’s discovered.

The stories range from sad, “The Pretty, Grown-Together Children” about Daisy and Violet Hilton, to the cathartic, “The Internees,” about the women survivors of Bergen-Belsen. In the story about the conjoined twins, Bergman imagines the declining years of the famous pair, attached at the hip. Once they were the darlings of the stage, singing and performing, but society has turned its back on their odd life. In middle age, they work at a grocery store, where women pity them, children gawk and insult, men make rude remarks. There’s hope of a comeback, but none of the men who promise such a thing are reliable.They all leave in the end, and the sisters must face an end of their own.

In the stories, you’ll find Joe Carstairs, “the fastest woman on water,” with her island, Whale Cay, and her lovers, among them, Marlene Dietrich.

You’ll meet Romaine in her declining years, a once-famous artist who used a palette of black, white and gray for her somber works. Romaine is plagued by ailments, hatred of the world and a mother who never loved her. In her 90s, Romaine still remembers that rejection. She’s a recluse, dependent on servants who care nothing for her, steal from her and even wear her clothes.

Throughout, you’ll see that beautiful people are often callous, incapable of truly caring about another person because their own lives take up so much of their energy. It isn’t easy being a genius, or Dolly, the niece who looks just like Oscar Wilde, or little Allegra Byron, the poet’s illegitimate daughter, who has a short, unfulfilled life. In contrast, actress Norma Millay outlives her sister, Edna St. Vincent Millay, but is nearly broken by the effort to care for her, by the vials of drugs that litter their farmhouse, by the potential cracked and mangled by addiction.

The stories, like the women themselves, are beautiful. They are also shattering at times, heartbreaking. It’s hard to keep in mind that this is fiction, that Bergman is making up all the dialogue, imagining all the discussions, arguments and despair.

Every single story is haunting in a way that will make you want to read it again, to savor the feelings, the careful, brilliant construction.

This is not a book you can walk away from easily. “Hell-Diving Women” imagines life on the road with Tiny Davis and the International Sweethearts of Rhythm. Tiny is a trumpet playing black woman who dresses like a man, and the International Sweethearts are a group of young ladies, black, white, Asian, Jewish. In the era they were touring the South, it was illegal for a white woman to travel with people of color. At any gig, they could all be arrested. And at any gig, Tiny could start in on the Ku Klux Klan, raising more furor.

Bergman brings that anger and fear to life in “Hell-Diving Women,” one of the longer stories. But she also captures an almost unbelievable moment in time, when the British liberate Bergen-Belsen, the concentration camp. When the Brits arrive, they have a box full of lipsticks, which the women grab — desperate to feel human again. Bergman does it in just a page and a half.

Also the author of “Birds of a Lesser Paradise,” another outstanding short story collection, Bergman’s writing continues to excel. The North Carolina native has a voice that is new and steeped in the tradition of the best writing of our age. Kirkus Reviews, notorious for lukewarm comments, calls the collection “as beautiful and strange as the women who inspired them.”

Be sure to read the author’s notes at the end of the book, where she describes her inspiration for each story and some of her research. As good as she is at writing, she’s a fantastic reader and collector of ideas.

Don’t be daunted by the tone. This collection illuminates its subjects and ascends the gloom. The joy is in immersing oneself in the creation.