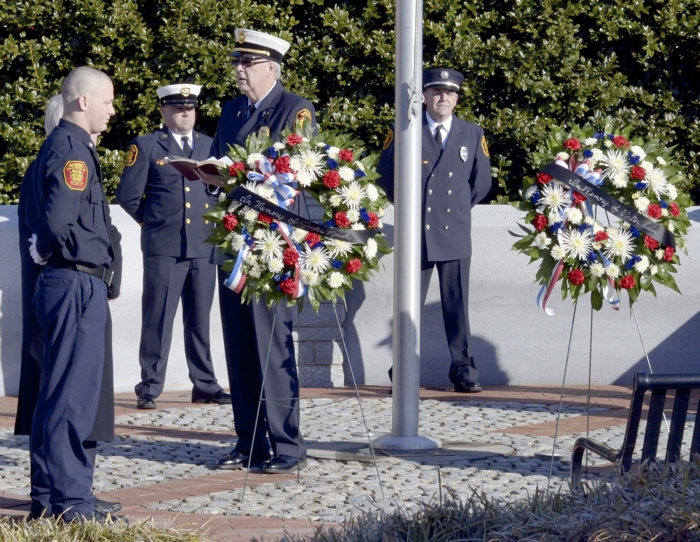 SALISBURY — Seven years ago, on March 7, 2008, two Salisbury firefighters lost their lives in the line of duty.

Victor “Vic” Isler and Justin Monroe were killed battling a major blaze at the Salisbury Millwork, the first Salisbury firefighters to be killed in action in over three decades.

It’s hard to believe that so much time has passed, said Chasity Young, of Spencer. She was 13 when Monroe was killed.

Having gone on to become a firefighter herself, with the Ellis Cross Country Fire Department, Young was one of some 50 firefighters, family members and leaders who gathered Saturday to remember Isler and Monroe at an early-morning ceremony.

As an honor guard raised the flag at the county’s firefighters memorial to half-staff, firefighters in dress uniform were joined by local leaders, including Salisbury Mayor Paul Woodson, in laying two wreaths near the stone monument where the names of the fallen are engraved.

“This always takes me back to the day it happened,” said Young, 20, after the ceremony. “It’s all I think about, all day.”

Her father, Wayne Comer, is a Spencer firefighter and police officer.

Young remembers Monroe as a young man who was always kind and outgoing. “He always put everybody before himself,” she said. “He’d do anything to help others, even if it was just listening.”

Isler, 40, had a previous career in New York as a firefighter and medic.

Inspired to return to firefighting after the Sept. 11, 2001, attacks, he moved to North Carolina and attended rookie school at Rowan-Cabarrus Community College.

Salisbury Fire Chief Bob Parnell thanked the firefighters, retirees, family and friends who gathered in the cold for the annual ceremony.

Parnell spoke of the sacrifice Isler and Monroe had made, and of the mutual support among firefighters’ families and the larger family of firefighters in Rowan County.

Peters went on to recall the cold, rainy day seven years ago “when two of Salisbury’s bravest were lost.”

Peters said that, in a culture that focuses on celebrities, true heroes like Isler and Monroe do not get the recognition they deserve.

And Peters quoted the Gospel passage that says that, in order to become a great leader, that person must first become a servant.

“If we think of the ultimate sacrifice that Justin and Vic gave, this verse comes to mind,” Peters said.

After Peters’ prayer, Parnell told the audience, “I’ve said many times that firefighting is a call. I thank you for answering that call.”

“I believe they’re looking down on us right now,” Parnell said.

Rain or shine, firefighters gather each year to remember the sacrifice Isler and Monroe made for their community.

Battalion Chief Chris Kepley, of the Salisbury Fire Department, smiled as she recalled how Isler always brought a positive attitude to what he did.

For his part, Parnell said he hoped the community would remember Isler and Monroe, and all those who put their lives on the line to keep their friends and neighbors safe.

“We lost them way too early,” Parnell said.