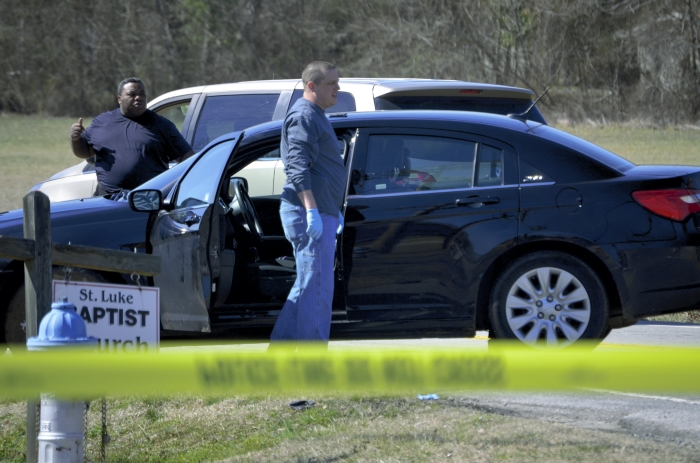 Salisbury Police intially responded to Old Mocksville and Hawkinstown roads early Saurday morning where this Chrysler was in a ditch. Police believed the vehicle was involved in a crash, but upon further inspection determined this was a homicide. The driver was deceased and still inside the vehicle. Police have not identified the person. Shavonne Walker/Salisbury Post

Salisbury Police have identified the victim of a Saturday morning homicide as Miguel Angel Urrutia, 24, of West Thomas Street, but have said little else.

Authorities said Urrutia was found dead inside his black Chrysler 200 at the intersection of Old Mocksville and Hawkinstown roads. He had been shot.

Witnesses told police a second person was seen getting out of the victim’s vehicle, getting into another and leaving the scene.

Police and fire personnel were initially called to the intersection at 6:46 a.m. for a vehicle accident with an injury. Upon arrival, police officers found the Chrysler sedan in a ditch, with a body inside. Police released the name of the victim several hours after the vehicle was found, but have not made an arrest as of Saturday night.

Early in the investigation police said it was clear Urrutia did not die as a result of the accident.

The name of the victim was withheld until police could notify the family. A Post reporter went to the home believed to be the family of Urrutia, but no one responded.

Police blocked off the intersection, allowing only traffic from Old Mocksville Road going to a Hawkinstown Road destination to go through. Several motorists turned around at the entrances to the Eagle Heights and Windemere subdivisions.

Police have not disclosed a possible motive. Urrutia has a varied criminal history that includes felony drug possession offenses. He was convicted in January 2014 and was released in March 2014.

No other details were available from police at this time.

Anyone with information regarding the death is encouraged to contact the Salisbury Police Department at 704-638-5333 or Crime Stoppers at 1-866-639-5245. These calls can be made anonymously.