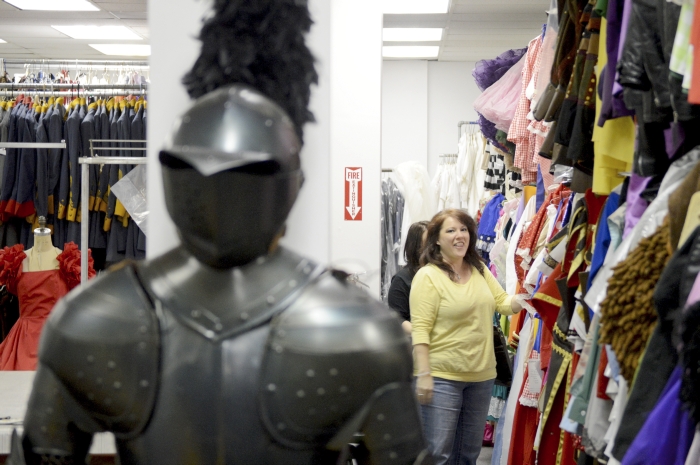 After months of work and a move from Greensboro, Eastern Costume Company held its grand opening Friday.

The costume shop, owned by Piedmont Players Theater Company, is situated below road level and underneath Innes Street Drug Store. Piedmont Players purchased the formerly Greensboro-based company in December. It took two moving trucks multiple trips to get the more than 40,000 costume pieces from Greensboro to Salisbury.

Now located in downtown Salisbury, the costume company will be open on weekdays from 10 a.m. to 4 p.m. During its operating hours, the shop will rent costumes for the public. The company also rents costumes to theaters and for plays across the nation. Eastern Costume Company even has wedding dresses.

He added that the costume shop would have a series of open houses in the coming weeks to welcome theaters near Salisbury as a form of promotion.

“When people think of a costume, they think of Walmart on Halloween,” Leonard said. “Basically this costume shop is for shows, but we’re also able to offer individual costumes for people.”

He said working with other theaters is one of the most exciting parts about Piedmont Players expanding to include a costume shop.

During Friday’s open house, the costumes didn’t simply hang on shelves for visitors to view. Members of the Piedmont Player’s organization used the costumes to help lure pedestrians walking through downtown Salisbury into the costume shop.

One of the several people present for the grand opening was the company’s previous owner Juanita Dunlap. She first took over ownership of the company in the late 1980s. Nearly all of the thousands of costumes in the shop were made under Dunlap’s ownership.

She said a fire in 1986 destroyed much of the costume stock. Only 286 pieces from a Romeo and Juliet show remained following the fire.

“The fire damaged everything and we had to rebuild the building,” Dunlap said. “If you called and wanted a show, we’d say ‘oh yeah, we can do that.’ We never told anybody we could not do a show.”

Dunlap’s introduction to Leonard came decades ago while he was a theater director at Catawba.

In 2009, she first considered selling the company. She recalled talking to Leonard about potentially buying Eastern Costume Company in 2009 but a deal never materialized.