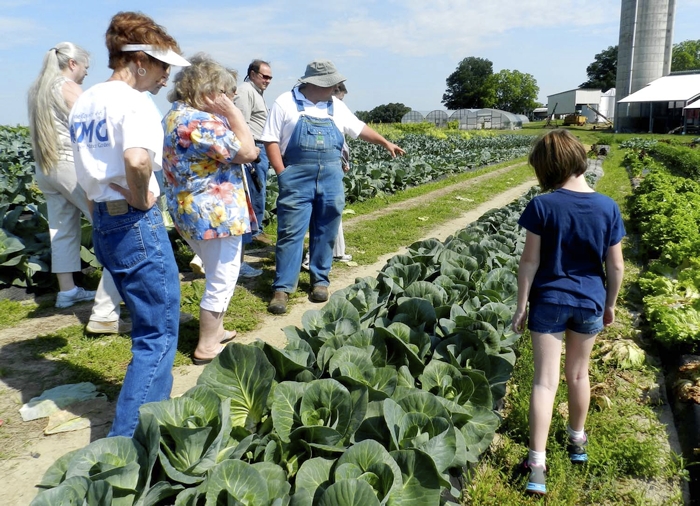 Submitted photo David Correll, in hat and overalls, gives a tour of his farm.

David Correll is the fourth generation to farm on the family land, and he and wife Cheryl were recently recognized among the top 10 National Outstanding Young Farmers for 2015.

David, a familiar face at the Salisbury Farmers Market, was nominated by Darrell Blackwelder and Danelle Cutting of Rowan Cooperative Extension.

“They’d been pushing me to do it, and this was the last year I was eligible, so I went ahead and did the paperwork.”

Four young farmers were named as winners, couples from North Dakota, Nebraska, California and Georgia. The 10 nominees gathered in New Jersey for the finals, a series of interviews with several judges, who scored them all independently.

“It started with an application,” David said. “We had to answer questions about soil and water conservation, community involvement, changes to the farm, leadership in farm groups.”

From there, 25 farmers were picked, and more questions came, about goals and plans for the future. From that, 10 farmers were chosen.

The best thing about the experience, David said, was getting to talk to the other farmers. “It was nice to talk about the challenges. Everybody had a little different farm.” The California farmers have 320 acres of almonds, for example. “It was a great opportunity to network with people from everywhere. We learned how different operations work, how they’re the same and different, as well.”

The trip was all expenses paid and intensely focused in farming. All the nominees stayed in the same place and went to meetings and presentations.

All nominees presented a video about their farms, there were more interviews and a banquet. They toured a Philadelphia produce terminal, went to a big greenhouse in New Jersey and visited Rutgers University’s ecology complex. Then it was another day of meetings and banquets.

“Then we tried to figure out a way to get back home with all the snow,” David said, laughing.

“The neat thing is, after we had spent four days together, and they announced the winners on Saturday, you almost got close enough to everybody that you didn’t care who was in the top four. We’d spent the entire time together and became friends. It was a really neat experience.”

Now the Corrells are part of the Outstanding Farmers of America fraternity. They can go back to the events any time. Oscho Deal from Circle D Beef was one of the finalists in the 1970s, David says, and he went back every year.

David and Cheryl were always interviewed together. “It’s usually just guys together,” David said, “but wives were included in everything. There was not a wife there who wasn’t part of the farm.

“Cheryl does a lot with the markets and does all the deliveries and she does the recipes and getting emails to customers and all the marketing. We homeschool the kids, too.”

“I think the friendships we made and the networking we did is the most important thing,” he said.  “It’s the support and knowing the highs and lows and everything else.” Now David or Cheryl can just pick up a phone and call one of their new friends to figure out farm issues. “The friendships with this group remain for a long time.”

David thinks the judges were looking for farmers who have learned to do different things. “They looked at how your farm changed and how you started new things.”

In 2005, the Corrells sold their dairy herd. They put in tomatoes and eventually grew their retail business with the Farmers Market, which was followed by their home delivery service. They put in a high tunnel greenhouse and started using hydroponic growing with a grant. “We’re seeing what we can grow and grow effectively. They are really looking for some different things like that in judging.”

They have 20 acres of tomatoes, 8 acres of mixed fruits and vegetables, 300 acres of row crops, 35 beef cows and a small flock of sheep.

The retail Farmers Market “is really what I enjoy doing. That’s been one of my main additions and the thing I do the most management of,” David said. His father and uncle are still on the farm and are “very supportive. We all do it together. The Farmers Market is more Cheryl and I. That’s where I see the farm in the future — more retail maybe than wholesale. We take it a year at a time.”

David calls the local food situation in Rowan a moving target. The Farmers Market was booming for several years, then other markets started popping up all over. David feels like it diluted the customer base with too many choices.

“We’re lucky in Salisbury. We have one market. It’s very viable. “

The Corrells looked at how much they needed to sell and came up with the home delivery service to capture people who don’t come to the Farmers Market.

He says that’s the best part of the delivery, to people who can’t get to the market. Cheryl does most of the deliveries and keeps tabs on who needs a short visit and who just wants the basket of produce on the porch. “Cheryl shines in those deliveries. It’s a pretty big job now, figuring out routes, what’s coming in, how long the produce can be on the truck.”

The weekly delivery includes eight to 10 different varieties, along with recipes for unusual items, suggestions for use and a weekly email with a list of what’s coming so people can plan ahead. They deliver on Tuesday and Wednesday.

“Everybody has loved what they get; it’s a large quantity sometimes, but we try not to overwhelm them. … We work really hard not to give them collards every week, but we do six weeks of greens” and whatever is at its peak.

“We grow close to 150 or 175 different varieties of produce.” The deliveries are in the afternoon, so people get them when they come home from work and the baskets do not sit outside for hours. The contract is for 15 weeks, or there’s a 14-week option for people who go away for a week in the summer.

The Corrells don’t offer half shares, because the delivery cost is the same, but do encourage sharing. They would like to have about 70 families sign up this year. “I want to expand it, but not a lot,” David says. “If you take 60 bundles of kale a week, you’ve put a hurting on that kale.”

David enjoys his time at the market, meeting regular customers and hanging out with other vendors. “I do a lot of networking at the market. I think to be out there in front of folks is really important.”

“We have to make something off this farm every day. It’s our living. It’s a unique enterprise. It’s fun, but it’s unique.”