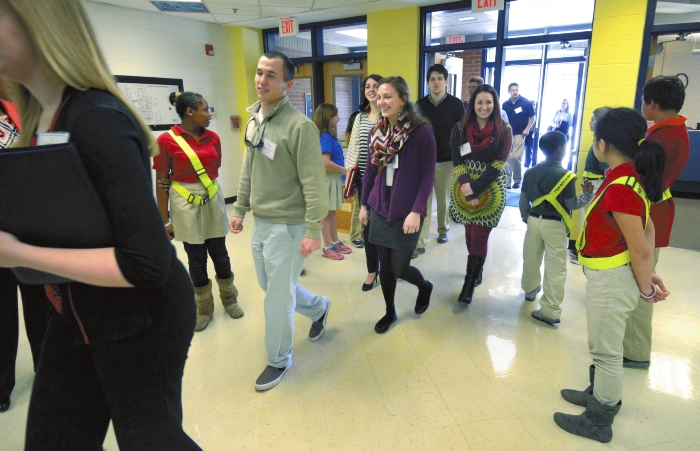 Rowan Salisbury School System brought 18 college seniors who are education majors who are interested in teaching to Salisbury to tour 3 schools and to see Salisbury. The recruits are greeted entering Koontz Elem by members of the student safety patrol . photo by Wayne Hinshaw, for the Salisbury Post

The Rowan-Salisbury School System is in great need of more math, science and Exceptional Children teachers, so district administrators decided to get a head start and a leg up on the hiring competition this year by hosting its first teacher recruitment weekend.

Eighteen college seniors from across the state were invited to spend a weekend in Salisbury to visit local schools, explore Rowan County and interview for open positions for the 2015-16 school year.

“We wanted to hone in on a special group of students – math, science and EC (Exceptional Children),” said Executive Director of Human Resources Kristi Rhone.

This isn’t his first experience with Rowan County – his wife used to live in Salisbury and much of her family still lives here.

Looking for a position with Rowan-Salisbury “may have been a consideration,” but the weekend “really solidified it as an option.”

“This definitely helped,” he added.

Gabrielle Accardi and Grace Frantz are both seniors at High Point University who want to teach Exceptional Children classes.

Both women mentioned that they were interested in working for a smaller school system. They heard about Rowan-Salisbury’s recruitment weekend at a job fair and were curious to find out more about the district.

The recruits met at their hotel, and then started off the long weekend with tours of three Rowan-Salisbury Schools – Carson High, Southeast Middle and Koontz Elementary schools. Students showed the recruits around each school, showing off their favorite features, teachers and programs.

The prospective teachers followed the visits with a trolley tour of Salisbury, which took them through historic downtown Salisbury, by Livingstone and Catawba colleges and the site of the school system’s future central office building.

Today, the prospective tours will attend the morning session of EdCamp Rowan – a professional development conference being held at Knox Middle School, then spend the afternoon at Lazy 5 Ranch and Horizons Unlimited.

The recruits will meet Rowan-Salisbury principals for interviews Sunday morning.

According to Rhone, some of them may even be hired on the spot, and those who would teach math, science or Exceptional Children classes could be offered a signing bonus.

“I think it’s a really neat idea,” said Melissa Murguz, visitor services and trolley manager for the Salisbury-Rowan County Convention and Visitors Bureau, adding that the weekend gives the recruits a good feeling for the community in just a few short days.

Murguz has partnered with the Rowan-Salisbury School System since early December to plan the perfect weekend to attract potential teachers.

The recruitment weekend was made possible by a gift from Fred Stanback.