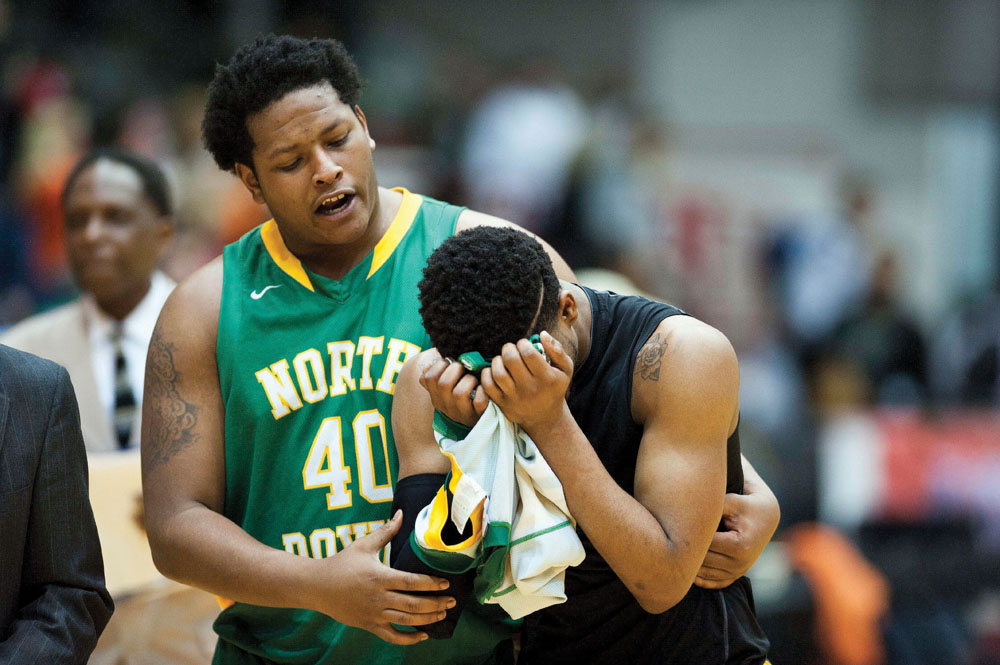 WINSTON-SALEM — North Rowan guard Jalen Sanders drove hard in the final seconds, but his contested, physical shot from the right baseline didn’t drop and Sanders dropped to the floor in anguish and exhaustion.

Sanders and North Rowan lost 65-63  in a 2A Western Regional semifinal to unbeaten East Lincoln on Friday in the Joel Coliseum Annex.

“Sanders is a great player and he made really tough shots all night,” said East Lincoln coach Neil Hodges after his team dodged that final bullet. “We played good defense and we were fortunate he didn’t make the last one.”

Sanders got some contact on that final play, but he didn’t get the whistle he hoped for.

North Rowan (19-7) had the ball out of bounds underneath and had four seconds to shoot, so Sanders didn’t have time for patience. He had to go.

“Both of the Surratt brothers (Chazz and Sage)  ran at me as soon as I got the ball,” Sanders said. “I decided to try to get to the baseline and  get a shot up. It just didn’t fall.”

The Surratts combined for 48 points for the Mustangs to offset 19 points apiece by Sanders and sophomore Joseph Scott.

With the score tied 63-all in the stretch run, North Rowan’s Paris Hillie passed  to Alexis Archie in the paint, and it appeared Archie would have a layup. Instead Cameron Dollar made an athletic block, and  it led to Hayden Duggins scoring the decisive hoop for East Lincoln (23-0) on a fast break.

“I made a pump-fake and I thought I had it,” Archie said. “But their guy made a nice play.”

Early, it appeared North Rowan might be blown out. The Cavaliers didn’t score the first four minutes and they trailed 11-0 before Sanders finally got them on the board with two free throws.

Then Scott made the Cavaliers’ first field goal, and slowly they climbed back a point at a time.

“We were very tight at the start, but we still didn’t get into panic mode,”  said North Rowan coach Andrew Mitchell, who led his team to the regional for the fourth time in five years. “I think you saw two of the best juniors in the state out there tonight in Chazz Surratt and Jalen Sanders, and Jalen did a great job of controlling the tempo of the game.”

North Rowan owned the second quarter 22-11 and got even at 30-all at halftime when Paris Hillie drained a buzzer-beating 3-pointer.

“North Rowan’s defense was creating some problems for us,” Hodges said. “Everyone on that team has quick hands.”

The second half was furious, with Scott getting repeated layups and Henderson Lentz finding the range on 3-pointers. Two free throws by Archie gave North Rowan its first lead, and North Rowan fans went wild,  but the Surratts always had an answer.

The biggest play of the night came when Scott flew in for a layup attempt with three minutes to go. That layup would’ve put North Rowan ahead by six points, but Chazz Surratt skied and blocked it. Moments later, East Lincoln scored, and North Rowan’s lead was down to two.

“Kids make amazing athletic plays now, and that was a stupendous play,” Hodges said. “There are times when Chazz just will not let us lose. He rescued us.”

It was a draining loss for the Cavaliers, who are very young and played again without injured standout Josh Handy. Last season they beat East Lincoln at home in the second round of the playoffs with a seasoned team. East Lincoln, which will take on Smoky Mountain on Saturday in the regional final, hasn’t lost since that game in Spencer.

“We had a good run  this year and we fought to the end,” Archie said. “We never feel like we’re out of a game and we never felt like we were out of this one.”